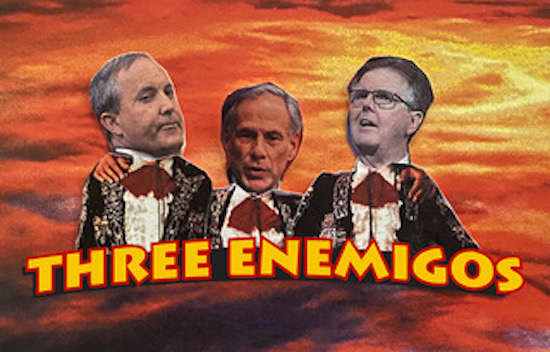 Every Republican official in Texas with a functioning conscience knows what should be done with our long-indicted, oft-accused, hitherto unaccountable Texas Attorney General Ken Paxton… Paxton should be scrubbed from the Office of Attorney General with the thoroughness one applies to disinfecting any other contaminated surface… Any number of disinfectants might work against the stains left by a man who has managed to avoid trial for five long years on securities fraud charges and finally last year saw seven of his own top aides at the AG’s office allege that Paxton committed bribery and abuse of office in his efforts to help a campaign donor.

The disinfectant approach is new. Somehow I can’t get Sarah Cooper’s comedic rendition of Trump’s disinfectant advice out of my head when I hear the word used.

Four aides to the attorney general, James Brickman, David Maxwell, J. Mark Penley, and Ryan Vassar, filed a whistleblower lawsuit, saying they were fired in retaliation. They said he was abusing his power to help Nate Paul, a political donor, and have amended their pleadings recently with stronger language:

Some of Paxton’s actions directing the [Office of the Attorney General] to benefit Paul were criminal without regard to motive… Others were so egregious and so contrary to appropriate use of his office, that they could only have been prompted by illicit motives such as a desire to repay debts, pay hush money, or reciprocate favors extended by Paul.

Ouch. This from his conservative former staffers.

The clamor to get the Ken Paxton out of office is coming from editorial boards across the state.

The clamor to get the indicted Texas attorney general out of office is now coming from editorial boards across the state. A securities fraud charge, alleged bribery, and abuse of power may be a toxic mix for the Republicans the editors are appealing to, but Paxton’s role in voter suppression and his embrace of the Trump electoral victory hoax is the toxin that really requires disinfectant.

In the run up to the presidential election, Paxton distinguished himself by appealing every judicial ruling that would make it easier to cast a vote by mail during the pandemic. When other states were sending out mail ballots for safety reasons, he was making sure Texans had to jump through multiple hoops to even apply for a mail ballot.

For many Texas voters eligible by age (65 or over), it was the first time they got acquainted with the vote by mail process. Print the application, fill it out, remember to mark “annual,” sign it (the same way you will sign your ballot), get a stamp and envelope, find the correct county address for your envelope, and then mail it. And repeat each year! Navigating the Secretary of State’s site to accomplish all of this nearly requires an engineering degree. Of course a computer, a printer, an envelope and a stamp are also required. And, guess who doesn’t usually have access to all of these?

Strict eligibility parameters, a cumbersome application system, and restrictions on where and when you can drop off a mail ballot (if you don’t trust the mail) make Texas the worst state in the nation in which to cast a ballot by mail. Still, nearly 10% of those who voted in the presidential election in Texas persevered and did so with mail ballots. It was the best way for eligible and vulnerable older voters to avoid contagion.

He filed a lawsuit to question the legitimacy
of other states’ votes.

Paxton went further than any other Republican attorney general in the nation to aid and abet the Trump election hoax. He filed a lawsuit to question the legitimacy of other states’ votes. According to The New York Times, he didn’t even write the legal pleadings, he just signed a contract to have Trump’s attorneys do the writing. The Supreme Court took no time and very few words to dismiss it. Then, Paxton doubled down. He spoke at the January 6 rally, his bogus legal arguments providing fuel before the insurrectionists stormed the Capitol.

In my view, the securities fraud, abuse of power, and bribery on behalf of a donor pales in comparison with teaming up with Proud Boys and Oath Keepers to commit treason.

What a trio of statewide elected leadership we have in Texas. The Tres Enemigos del Pueblo, are hell bent on mayhem and voter suppression. Lt. Governor Dan Patrick would have eagerly presided over our funerals for the economy. He said so on Fox News, provoking a successful “Cough-In” campaign in late March 2020. But, these guys were just warming up.

Governor Abbott, who is all about micromanaging counties like Travis, Dallas, and Harris, has outlined emergency priorities. You might think that Texans’ health or healthcare would make the list, but they did not. Abbott wants to protect businesses that stayed open from civil liability. That made the list. He also wants to punish local governments (aka Austin) that “defund the police” as defined by Abbott.

It’s not the pandemic’s brutal toll on Texans that Abbott is laser focused on, but who can vote. Despite zero evidence of electoral fraud, Abbott is leading the charge for what he calls election security. The cloak around this hoax is about as thin as the white robes on a Klansman as he puts supposed non-citizen voters in the crosshairs and stakes his claim to pandemic voting safety against safely voting, vowing never to expand mail in ballot access. As with all Big Lies, don’t be fooled. Voter Integrity = Voter Suppression; Stop the Steal = Steal the Vote. It’s the same old same old here. Remember the Drug War? It wasn’t. It was a Mass Incarceration initiative thinly veiled as something else.

But now, beware, the Texas legislature is in session.

But now, beware, the Texas legislature is in session where 130 bills have been filed under the guise of voter integrity that spell out myriad forms of voter suppression: ways to muck up registration by eliminating deputy voter registrars, ways to purge suspected non-Citizens (Spanish surnames), ways to require not one, but two forms of ID, ways to prevent organizations from sending out applications for voting by mail, and ways to curb the enthusiasm of county election administrators.

Particularly in the most populous counties in Texas, election administrators are the people who actually think their job is about increasing voter participation. These are the people who went to great lengths to provide access, even 24-hour access in Harris County, to in-person early voting, and to provide access to drop boxes for mail in ballots. (Well, Paxton shot that down in Harris County. Harris County, with a greater population than 26 states, was allowed one location.)

The Texas legislature will probably have to convene in special session to do their dirtiest work. This is the year the Republican majority will attempt to further muck up democracy with redistricting. The jigsaw maps already divide Travis County into five Congressional seats. Four of them collide at the intersection of 38 ½ and Guadalupe in Austin with a Jiffy Lube in one district and a Starbucks in shouting distance in another. Austin had to be carved into pieces to dilute its progressive votes. That’s why my congressman is a Republican who lives 170 miles away from me. And the carving knives are being sharpened.

The redistricting carve-up may come, in fact, about the time you are carving a turkey. It now looks as though the census data will not be released until late September. The special problem this will pose is that there will be little time for public input on redistricting. And the Governor may be able to move the Texas primaries in 2022 as a result. It’s not looking like an optimal situation for Texans. Stay tuned through Fair Fight. You may need to take time between helpings of turkey to make some calls.

He reminded me that I was, well, white.

Maybe you haven’t experienced long wait times at a poll. Let me take this down to a personal level. I’ve been on weekly Zoom calls with retirees, all members of the Texas Alliance for Retired Americans. I was saying that most people in Texas don’t know we are a voter suppression state. A Black participant spoke up, staring me down as gently as you can via Zoom, and reminding me that I was not the target. He reminded me that I was, well, white. 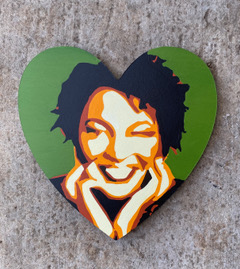 Painting of Stacey Abrams by Carlos
Lowry and Alice Embree.

So, if you don’t have a name that’s hard to pronounce, you don’t speak with anything but a Texas accent, you live in a zip code where there are always lots of voting machines, you have two IDs, you haven’t moved in a while, haven’t changed your name in years, you, too, may be white. Sometimes you have to be reminded. I did.

Stacey Abrams in Georgia didn’t need to be reminded of anything. She narrowly lost an election for governor there and probably didn’t even take a day off before she went on to organize against voter suppression. She’s walking in Congressman John Lewis’ shoes. (Well, not literally.) But, she has become the face of a mass movement in that state that we need in Texas. She will be here virtually as the keynote in SXSW, but we need her spirit and her skills to be replicated throughout the Lone Star State. And we need that spirit to be bilingual as Jolt Action reminds us. Because in 2022, we have three statewide leaders that really deserve new titles before their names: Former Governor, Former Lt. Governor, Former Atty. General.