Leon Panetta’s CIA : Getting Away With Torture 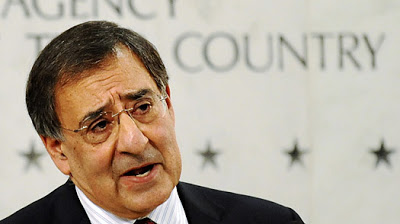 It was obvious from the moment that Barack Obama appointed Leon Panetta to head the CIA that there was going to be no serious investigation — much less prosecution — of the high crimes of torture committed by the agency at the order of the Bush White House. Panetta, a Clinton retread (who actually began his career in the Nixon administration), has always been a bland, feckless, obedient servant of the Establishment; he has no outside power base, no pull, no heft, no popularity — nothing that would enable him to grab hold of the CIA with both hands and clean that fetid, blood-encrusted house. And of course, it was precisely this kind of powerless figure that Barack Obama wanted in the post.

The appointment was very typical of the Obama operation. Panetta had made a few very mild statements over the years that would allow him to be passed off as some kind of “progressive” in the witless, substanceless “process stories” that the corporate media do for new government appointees. This would be enough to keep the progressive “base” — which was overwhelmingly inclined to give Obama every benefit of every doubt — lulled long enough to get the patsy into the job.

Of course, to actually get the job, Panetta had to make it clear to Congress that he wasn’t going to stir up any trouble on the torture front, and was willing to play along with anything the Unitary Executive might order him to do. But the corp-media made little of this, concentrating instead on Panetta’s rote assertions that “America doesn’t torture,” and his embrace of the Army Field Manual as the standard for CIA interrogation. (Of course, the vaunted manual also allows practices that any rational human being would consider torture, but that’s another story.)

Once Panetta was confirmed in his figurehead director’s role, the Obama White House then confirmed its true intentions regarding the rogue agency. It has put the actual running of the CIA into the hands of one of the top figures involved in the Bush torture program. Scott Horton at Harper’s points us to the remarkable story by investigator John Sifton, detailing Obama’s retention — and promotion — of Bush’s willing torturers. From Sifton, at The Daily Beast:

“On Monday night the confidential report of the International Committee of the Red Cross on the CIA’s secret detention and interrogation program was published on the website of the New York Review of Books. The report confirms previous allegations about CIA abuses against detainees. Unlike earlier reporting, however, the document is based on irrefutable first hand information: interviews with detainees and U.S. officials. The document describes in stark detail the CIA’s use of forced standing, sleep deprivation, prolonged isolation, assaults, and waterboarding. It also discloses the participation of CIA medical personnel in torture….

“The New York Times reported that Leon Panetta, the current CIA director, has taken the position that “no one who took actions based on legal guidance from the Department of Justice at the time should be investigated, let alone punished.” Yet a number of CIA officials implicated in the torture program not only remain at the highest levels of the agency, but are also advising Panetta. Panetta’s attempt to suppress the issue is making Bush’s policy into the Obama administration’s dirty laundry.

“Take Stephen Kappes. At the time of the worst torture sessions outlined in the ICRC report, Kappes served as a senior official in the Directorate of Operations—the operational part of the CIA that oversees paramilitary operations as well as the high-value detention program. (The directorate of operations is now known as the National Clandestine Service.) Panetta has kept Kappes as deputy director of the CIA—the number two official in the agency. One of Kappes’ deputies from 2002-2004, Michael Sulick, is now director of the National Clandestine Service—the de facto number three in the agency. Panetta’s refusal to investigate may be intended to protect his deputies. Since the basic facts about their involvement in the CIA interrogation program are now known, Panetta’s actions are increasingly looking like a cover-up.”

“Another overlooked fact is this: the ICRC report is an important legal document that contains well-sustained allegations of criminal conduct with legal significance. Unlike earlier claims in books, magazines, and newspapers, the ICRC’s allegations are official notices from a legally recognized entity. The ICRC, after all, is not Human Rights Watch, the Washington Post, or The New Yorker, all of which have reported on the CIA’s secret prison program. The ICRC is an official entity recognized under the Geneva Conventions and various other earlier international treaties relating to armed conflict and prisoners of war. The ICRC is specifically tasked under the Geneva Conventions to visit prisoners and communicate with detaining powers to uphold the conventions’ spirit and purpose. Its interpretations and statements on matters of international law are held as legally authoritative. As such, the ICRC’s allegations have legal significance beyond previous disclosures. In effect, the document itself is evidence in a criminal case.

“Note in particular the report’s date, February 14, 2007—Valentine’s Day. On that date, the U.S. government was put on notice about the allegations of CIA torture. (The ICRC also wrote to the U.S. governments about the issue of disappearances at several points in 2003-2006.)

The United States has formally adopted the Geneva Conventions and the Convention Against Torture; they are not some kind of “foreign devilment” messing with our sacred sovereignty: they are the law of the land. But it is clear that the Obama Administration does not have and never had the slightest intention of obeying the law and instigating the required investigations and prosecutions of the high crime — the capital crime — of ordering and committing torture. And the reason for this refusal is also clear: the Obama Administration wants to retain the power to torture, to conduct “paramilitary operations” with secret armies and single assassins, to carry out mass, illegal surveillance of the population with no legal accountability, to do “whatever it takes” to keep the machine of war and domination churning at full strength. That is why they have retained apparatchiks like Kappes and Sulick; that is why they are not only defending the Bush gang’s egregious assertions of authoritarian power, but are actually seeking to expand them, as Glenn Greenwald and others have detailed.

It is understandable that people hunger desperately for change after the open, scalding evils of the Bush years. It is understandable that they would seize on an attractively packaged figure who made a few progressive noises, carried a great deal of genuinely symbolic weight due to his race, and was more personable, cool and articulate than his god-awful predecessor. It is understandable that many people would want to give this figure the benefit of the doubt, to turn a blind eye to the many warning signs that emerged during the campaign, and hope for the best. After all, who would not rather live in hope?

But hope must be grounded in reality; and it must be invested in the right place. When reality gives it the lie, then it must be abandoned. There is no hope to be found in the Obama Administration: no hope for genuine change, no hope for a clean break (or any kind of break) from the relentless and ruthless promotion of empire, oligarchy and militarism. By his own choices — his appointments, his policies, his court actions, his rhetoric — Barack Obama has demonstrated beyond all doubt his sincere and abiding commitment to “continuity” in the most pernicious and corrosive elements of America’s lawless hyper-state. To place one’s hope in such a figure is a crippling, disastrous folly.

The only hope that can be associated with the Obama Administration is the long-shot, rapidly fading, outside chance that they could be forced — very much against their will — into at least slowing the militarist-oligarchic juggernaut by strong, sustained, massive, informed political opposition from the public. (And no, not the “tea-bag” fantasies of the fascistic Right, whose only real complaint about Obama — aside from the unspoken one about his skin color — is that he is not militarist and oligarchic enough.)

I don’t believe this will happen, that this kind of genuine and fruitful dissent will arise on a scale large enough to pressure the administration into making changes in order to save its own political skin. Nor do I, as some do, place any “hopes” — if that’s the word — that some outside power (or combination of powers) or calamitous event (or combination of calamitous events) will force the juggernaut onto another course. As in the case of the present global financial collapse, the reaction of the elite to such circumstances will be to do more of the same, to try more and more desperately to return to the status quo — or, as today, to exploit the panic and chaos of disaster to extend their own power and privilege even further. And with a militarist elite that possesses an arsenal capable of bringing the world down with them if they can’t hold on to power, I can’t contemplate such a Götterdämmerung of suffering and death with anything like “hope.”

But I also know that I don’t know what the future might bring. So whatever small hope I still have resides in the flickering possibility of engendering the kind of large-scale, genuine, fruitful dissent described above. I realize that this is a rather slim reed to hang on to; yet it is a mighty oak when compared to a hope invested in leaders who protect and promote torturers, who perpetuate — and laud — mass war crimes, who expand tyrannical powers, and who sell their children’s birthrights to a keep a tiny, rapacious elite in ascendancy. I will take my slim reed over such brutal delusions any day.

[Chris Floyd is an American writer and frequent contributor to Counterpunch where this article also appears. His blog, Empire Burlesque, can be found at chris-floyd.com.]

1 Response to Leon Panetta’s CIA : Getting Away With Torture