Leonardo Boff : In Praise of the ‘Siesta’ 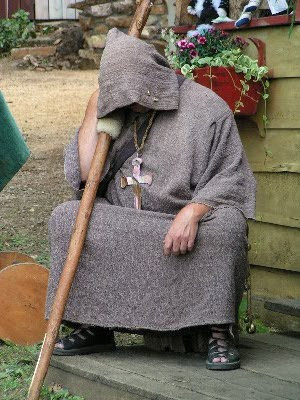 Did monks introduce the siesta to the West? Photo by DJW / Minnesota Renaissance Festival.
In praise of the siesta

“If you want to kill a friar, take away his siesta and make him eat late.” — old Spanish saying

RIO DE JANEIRO — After journalist and friend Zuenir Ventura, in a major newspaper in Rio, dared to exalt the benefits of the siesta, calling it good for one’s health and, even more, contending that it is a biological need that makes people more intelligent, I decided to praise the siesta.

It is an old goal that I have nourished for years, during which I have even done research on the matter. I hope to justify the fact that I am an inveterate siestero. So inveterate I am that I condition attendance at some conferences on the possibility off having a short siesta after lunch, even if it has to take place on a couch or in a chair.

In Freiburg, Germany, they took my wish so much to heart that they put a portable bed in a room so that I could take my blessed siesta. But I could not, because some Germans had the poor taste to organize a gathering during the lunch hour, with a group that even wanted to talk about metaphysical questions. The result is that the lunch hour is waste. Perhaps one ends up not eating anything or, what is worse still, there is no time to take my indispensable little siesta.

Personally, I am always reluctant to go to bed. I do not like to go to sleep and delay as long I can the hour of going to bed. There are few better things, among the pleasant satisfactions the Creator gave to the “degraded” sons and daughters of Adam and Eve, than a good siesta.

It is not necessary that it be long. Some 20 minutes are enough. Except on Saturdays and Sundays, when, as a person of good Italian descent, I have two glasses of wine. Not so much for the wine itself, but because of the belief that it fosters a deeper and longer sleep. Then I sleep without a care, “a pierna suelta,” as the Spaniards say, well translated by our people of Minas Gerais: “durmo de pé espalhado.”

The origin of the siesta is mysterious, but because of its intrinsic goodness it must be linked to the anthropogenic process; that is, it must have existed ever since the human being appeared. If even animals take siestas, why would not humans, the more complex brothers and sisters of the animals, do so as well?

Some believe that in the Occident it was officially introduced by monks and friars. There is a delightful Spanish saying that goes: “if you want to kill a friar, take away his siesta and make him eat late.” In Spain the siesta is so sacred that most commerce shuts down during those hours. In the monasteries I could see that some friars would even wear pajamas for their siesta, especially after having a few glasses of wine followed by an excellent cognac.

It is said that Newton and Churchill had their best ideas after their siestas. Victor Hugo spoke of the siesta when mentioning the lion in a poem titled, “La meridienne du lion” (“The Siesta of the Lion”). Baudelaire, in “La belle Dorothée,” explains well why he took siestas: “the siesta is a sort of tasty death, in which the one who naps, half asleep, samples the pleasure of its disappearance.”

Rene Louis, in his Mémoires d\’un Siesteu (Memoirs of a Siesta Taker) says it well: “siesta allows me to observe sleeping; it is the moment when time stops and is quiet.” F. Audouard, in his Pensées, says it beautifully “daybreak occurs twice in Provence: in the morning and after the siesta.”

To me, the benefit of the siesta is this: it gives us a second night and the day breaks twice. Siesta lets us have, in the same day, a second day. Waking up from the siesta, everything starts over with renewed vigor, as if the day were beginning again.

If they take away my siesta, my body retaliates, especially if I am listening to a talk: I snooze, and blink, and it is not unusual for me to doze off. I cannot imagine a whole day of mental activity, paying attention to so many things and having to put I do not know how many ideas in order, without a restorative siesta.

Siesta is a wise invention of life. It relaxes the head, makes one forget annoyances and gives us the rare virtual experience of dying sweetly (sleep is a beautiful metaphor for death) and of being resurrected again.

(TD: Posted after arising from my Sunday nap) / The Rag Blog

1 Response to Leonardo Boff : In Praise of the ‘Siesta’