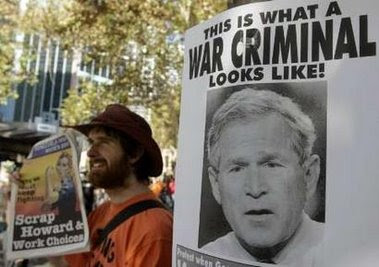 These are extraordinary times. With the United States and Britain on the verge of bankruptcy and committing to an endless colonial war, pressure is building for their crimes to be prosecuted at a tribunal similar to that which tried the Nazis at Nuremberg. This defined rapacious invasion as “the supreme international crime differing only from other war crimes in that it contains within itself the accumulated evil of the whole.” International law would be mere farce, said the chief US chief prosecutor at Nuremberg, Supreme Court justice Robert Jackson, “if, in future, we do not apply its principles to ourselves.”

That is now happening. Spain, Germany, Belgium, France and Britain have long had “universal jurisdiction” statutes, which allow their national courts to pursue and prosecute prima facie war criminals. What has changed is an unspoken rule never to use international law against “ourselves,” or “our” allies or clients. In 1998, Spain, supported by France, Switzerland and Belgium, indicted the Chilean dictator Augusto Pinochet, client and executioner of the West, and sought his extradition from Britain, where he happened to be at the time. Had he been sent for trial he almost certainly would have implicated at least one British prime minister and two US presidents in crimes against humanity. Home Secretary Jack Straw let him escape back to Chile.

The Pinochet case was the ignition. On 19 January last, the George Washington University law professor Jonathan Turley compared the status of George W. Bush with that of Pinochet. “Outside [the United States] there is not the ambiguity about what to do about a war crime,” he said. “So if you try to travel, most people abroad are going to view you not as ‘former President George Bush’ [but] as a current war criminal.” For this reason, Bush’s former defence secretary Donald Rumsfeld, who demanded an invasion of Iraq in 2001 and personally approved torture techniques in Iraq and at Guantanamo Bay, no longer travels. Rumsfeld has twice been indicted for war crimes in Germany. On 26 January, the UN Special Rapporteur on Torture, Manfred Nowak, said, “We have clear evidence that Mr. Rumsfeld knew what he was doing but nevertheless he ordered torture.”

The Spanish high court is currently investigating a former Israeli defence minister and six other top Israeli officials for their role in the killing of civilians, mostly children, in Gaza. Henry Kissinger, who was largely responsible for bombing to death 600,000 peasants in Cambodia in 1969-73, is wanted for questioning in France, Chile and Argentina. Yet, on 8 February, as if demonstrating the continuity of American power, President Barack Obama’s national security adviser, James Jones, said, “I take my daily orders from Dr. Kissinger.”

Like them, Tony Blair may soon be a fugitive. The International Criminal Court, to which Britain is a signatory, has received a record number of petitions related to Blair’s wars. Spain’s celebrated Judge Baltasar Garzon, who indicted Pinochet and the leaders of the Argentinian military junta, has called for George W. Bush, Blair and former Spanish prime minister Jose Maria Aznar to be prosecuted for the invasion of Iraq — “one of the most sordid and unjustifiable episodes in recent human history: a devastating attack on the rule of law” that had left the UN “in tatters.” He said, “There is enough of an argument in 650,000 deaths for this investigation to start without delay.”

This is not to say Blair is about to be collared and marched to The Hague, where Serbs and Sudanese dictators are far more likely to face a political court set up by the West. However, an international agenda is forming and a process has begun which is as much about legitimacy as the letter of the law, and a reminder from history that the powerful lose wars and empires when legitimacy evaporates. This can happen quickly, as in the fall of the Berlin Wall and the collapse of apartheid South Africa — the latter a spectre for apartheid Israel.

Today, the unreported “good news” is that a worldwide movement is challenging the once sacrosanct notion that imperial politicians can destroy countless lives in the cause of an ancient piracy, often at remove in distance and culture, and retain their respectability and immunity from justice. In his masterly Dr. Jekyll and Mr. Hyde R.L. Stevenson writes in the character of Jekyll: “Men have before hired bravos to transact their crimes, while their own person and reputation sat under shelter … I could thus plod in the public eye with a load of genial respectability, and, in a moment, like a schoolboy, strip off these lendings and spring headlong into the sea of liberty. But for me, in my impenetrable mantle, the safety was complete.”

Blair, too, is safe — but for how long? He and his collaborators face a new determination on the part of tenacious non-government bodies that are amassing “an impressive documentary record as to criminal charges,” according to international law authority Richard Falk, who cites the World Tribunal on Iraq, held in Istanbul in 2005, which heard evidence from 54 witnesses and published rigorous indictments against Blair, Bush and others. Currently, the Brussels War Crimes Tribunal and the newly established Blair War Crimes Foundation are building a case for Blair’s prosecution under the Nuremberg Principle and the 1949 Geneva Convention. In a separate indictment, former Judge of the New Zealand Supreme Court E.W. Thomas wrote: “My pre-disposition was to believe that Mr. Blair was deluded, but sincere in his belief. After considerable reading and much reflection, however, my final conclusion is that Mr. Blair deliberately and repeatedly misled Cabinet, the British Labour Party and the people in a number of respects. It is not possible to hold that he was simply deluded but sincere: a victim of his own self-deception. His deception was deliberate.”

Protected by the fake sinecure of Middle East Envoy for the Quartet (the US, EU, UN and Russia), Blair operates largely from a small fortress in the American Colony Hotel in Jerusalem, where he is an apologist for the US in the Middle East and Israel, a difficult task following the bloodbath in Gaza. To assist his mortgages, he recently received an Israeli “peace prize” worth a million dollars. He, too, is careful where he travels; and it is instructive to watch how he now uses the media. Having concentrated his post-Downing Street apologetics on a BBC series of obsequious interviews with David Aaronovitch, Blair has all but slipped from view in Britain, where polls have long revealed a remarkable loathing for a former prime minister — a sentiment now shared by those in the liberal media elite whose previous promotion of his “project” and crimes is an embarrassment and preferably forgotten.

On 8 February, Andrew Rawnsley, the Observer’s former leading Blair fan, declared that “this shameful period will not be so smoothly and simply buried.” He demanded, “Did Blair never ask what was going on?” This is an excellent question made relevant with a slight word change: “Did the Andrew Rawnsleys never ask what was going on?” In 2001, Rawnsley alerted his readers to Iraq’s “contribution to international terrorism” and Saddam Hussein’s “frightening appetite to possess weapons of mass destruction.” Both assertions were false and echoed official Anglo-American propaganda. In 2003, when the destruction of Iraq was launched, Rawnsley described it as a “point of principle” for Blair who, he later wrote, was “fated to be right.” He lamented, “Yes, too many people died in the war. Too many people always die in war. War is nasty and brutish, but at least this conflict was mercifully short.” In the subsequent six years at least a million people have been killed. According to the Red Cross, Iraq is now a country of widows and orphans. Yes, war is nasty and brutish, but never for the Blairs and the Rawnsleys.

Far from the carping turncoats at home, Blair has lately found a safe media harbour — in Australia, the original murdochracy. His interviewers exude an unction reminiscent of the promoters of the “mystical” Blair in the Guardian of than a decade ago, though they also bring to mind Geoffrey Dawson, editor of The Times during the 1930s, who wrote of his infamous groveling to the Nazis: “I spend my nights taking out anything which will hurt their susceptibilities and dropping in little things which are intended to sooth them.”

With his words as a citation, the finalists for the Geoffrey Dawson Prize for Journalism (Antipodes) are announced. On 8 February, in an interview on the Australian Broadcasting Corporation, Geraldine Doogue described Blair as “a man who brought religion into power and is now bringing power to religion.” She asked him: “What would the perception be that faith would bring towards a greater stability …[sic]?” A bemused and clearly delighted Blair was allowed to waffle about “values.” Doogue said to him that “it was the bifurcation about right and wrong that what I thought the British found really hard” [sic], to which Blair replied that “in relation to Iraq I tried every other option [to invasion] there was.” It was his classic lie, which passed unchallenged.

However, the clear winner of the Geoffrey Dawson Prize is Ginny Dougary of the Sydney Morning Herald and the Times. Dougary recently accompanied Blair on what she described as his “James Bondish-ish Gulfstream” where she was privy to his “bionic energy levels.” She wrote, “I ask him the childlike question: does he want to save the world?” Blair replied, well, more or less, aw shucks, yes. The murderous assault on Gaza, which was under way during the interview, was mentioned in passing. “That is war, I’m afraid,” said Blair, “and war is horrible.” No counter came that Gaza was not a war but a massacre by any measure. As for the Palestinians, noted Dougary, it was Blair’s task to “prepare them for statehood.” The Palestinians will be surprised to hear that. But enough gravitas; her man “has the glow of the newly-in-love: in love with the world and, for the most part, the feeling is reciprocated.” The evidence she offered for this absurdity was that “women from both sides of politics have confessed to me to having the hots for him.”

These are extraordinary times. Blair, a perpetrator of the epic crime of the 21st century, shares a “prayer breakfast” with President Obama, the yes-we-can-man now launching more war. “We pray,” said Blair, “that in acting we do God’s work and follow God’s will.” To decent people, such pronouncements about Blair’s “faith” represent a contortion of morality and intellect that is a profananation on the basic teachings of Christianity. Those who aided and abetted his great crime and now wish the rest of us to forget their part — or, like Alistair Campbell, his “communications director,” offer their bloody notoriety for the vicarious pleasure of some — might read the first indictment proposed by the Blair War Crimes Foundation: “Deceit and conspiracy for war, and providing false news to incite passions for war, causing in the order of one million deaths, 4 million refugees, countless maiming and traumas.”

These are indeed extraordinary times.