Los Angeles and Owens Valley : An Epic Struggle Over Water 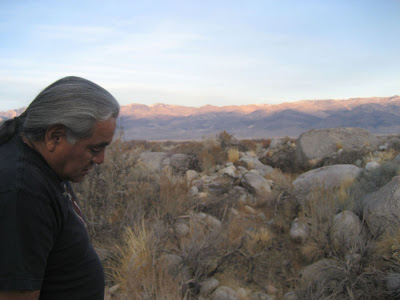 Harry Williams, member of the Paiute Tribe, wants to protect the Owens Valley from development. Photo by Jennifer I. Fenton / WIP.

The struggle over Owens Valley’s water resources is spattered with tales reminiscent of an old Hollywood Western starring John Wayne. The story’s origins can be found in the long struggle of indigenous peoples to maintain their lands and way of life.

“Steal my horse, run off with my wife, but damn you, don’t touch my water.” — Unknown

Unlike many modern cities and towns across the United States, the town of Bishop, California bursts in failed attempts to sprawl across the landscape that surrounds it. Pressed into the floor of the Owens Valley, and hedged in by looming mountain ranges to the East and West, Bishop’s city limits have remained virtually unchanged for decades. But while Bishop’s population remains stagnant, to the South, the city of Los Angeles continues to grow at breakneck speeds — growth that would be impossible without the clear gold that flows from the Sierra, through the Owens Valley, and into the gaping mouth of the City of Angels.

When Los Angeles was incorporated in 1850, it was a small city of 8,900. With no immediate water sources to support a larger population or agriculture, it’s placement in the desert of Southern California borders on the absurd.

I don’t remember when I became aware that Los Angeles was the identified villain in our town, but I do know I was young. My grandmother, a survivor of The Great Depression and a staunch conservationist, remembers drawing me a shallow bath as a child. This was not an unusual practice, as a resident of Los Angeles herself, she was required to pay a fee for the water she used. Apparently I was not particularly fond of the idea. “I want more water in my bath Grandma!” I demanded, to which she replied, “Water is a natural resource and we don’t want to waste it.”

The struggle over Owens Valley’s water resources is spattered with tales reminiscent of an old Hollywood Western starring John Wayne. The story’s origins can be found in the long struggle of indigenous peoples to maintain their lands and way of life. Harry Williams, a life-long resident of the Owens Valley, member of the Paiute Tribe, environmental activist, and self-taught historian, knows the area like the back of his hand.

Driving through the brush covered valley floor, Harry reveals the many channels – laboriously carved, created, and maintained long before the displacement of his ancestors began. “I love this land,” he tells me as we kneel beside a small sage brush, “and like the people who lived here before me, I want to protect it.”

With the gravel and sand crunching beneath our feet, Harry shows me how the area’s natives created a small piece of heaven by directing the flow of water pouring down from the Sierra into irrigation canals. These canals were then used to create Riparian areas throughout the valley floor, which in turn attracted game for hunting. As he talks, an expression of longing and pride overcomes his face, “We knew how to irrigate this land, and make it work, and look at what the City of Los Angeles has done – it was green and now it is desert.”

Local reports from long-time residents validate Harry’s claim. At 89 years old, Barbara S. makes no effort to hide her feelings about the Los Angeles Department of Water and Power (LADWP). “They were sneaky when they came here to buy land. Some of them even posed as young couples looking for farm land.” With disdain in her voice, she goes on, “Hell, they even made people believe they were buying land under the Reclamation Act – it was all bull crap!”

Enacted June 17, 1902, The Reclamation Act was put in place as the demand for water infrastructure from settlers grew. The intent of the legislation was to reclaim arid, uninhabitable lands and turn them into areas suitable for settlement, farming and “homemaking,” and the Owens Valley was recognized as an ideal location by the US Reclamation Service. As farmers and ranchers unwittingly sold their land and water rights to LADWP, the Reclamation Service abruptly ended the irrigation project. Acts of protest and violence became sport for locals, with some even going so far as to blast portions of the Los Angeles Aqueduct with dynamite. General distrust for the actions of LADWP among Owens Valley residents endures to this day.

The Fight for Water

As the years passed, Los Angeles grew, and so did its thirst for water. With the unregulated ability to divert surface water and pump groundwater, the desertification of the Owens Valley was well under way by the early 1920s. The Owens Lake and fifty miles of the Owens River dried up and by the early 1930s, LADWP left a mere 5 percent of land in the hands of local farmers and ranchers.

Decades passed and residents of the Owens Valley watched as the valley became more barren; springs, marshes, seeps, and wetland meadows began to dry up and disappear. With less vegetation and ground water, dust storms increased. However, when the California Environmental Quality Act of 1970 was enacted, Inyo County decision makers and concerned citizens were finally given the legal means to fight back. In 1980, the voters of Inyo County passed an ordinance to regulate groundwater pumping that was later ruled unconstitutional. Nevertheless, the county was able to form The Water Department in 1981, an agency charged with monitoring the effects of groundwater pumping.

And with its formation came employment for my mother. Looking back now, I have to chuckle at the strangeness of it all. She was hired as a secretary, but in reality she was more of a secretary/biologist. When school was out for the summer, my mother would take me with her on days she “worked in the field.” Sitting on the hot, brown vinyl seat of a 1960s Dodge truck with no air conditioning, I would watch as she carried a yellow case marked with a radioactive sign to a thin pipe sticking up out of the ground. With a clipboard in her hand and a cigarette hanging from her mouth, she would place a perfectly fitted cylinder device down the tube, and then jot something down. At the age of eleven, I had little understanding of what she was doing (measuring water tables), but now I laugh when she proudly calls herself an “accidental environmentalist.”

The information my mother collected would be presented to the newly formed Water Commission that would then make recommendations to the Inyo County Board of Supervisors. “The recommendations we provided in the first Water Management Plan were right,” she tells me, “but it was shut down by court hearings, injunctions, and stalling tactics by LADWP.” In the midst of negotiation, litigation, and passionate disagreements, the Inyo County Board of Supervisors met with LADWP to develop a groundwater management plan. The meetings took place behind closed doors, much to the chagrin of residents. When they emerged with a proposal, it was discovered the recommendations of both the Inyo County Water Commission and a citizen’s advisory committee were ignored and that no enforcement measures for LADWP were in place.

In late 1983, a handful of concerned individuals formed a non-profit citizens group — the Owens Valley Committee (OVC). The group committed itself to educating the public and monitoring both local officials and LADWP. Ceal Klinger, a volunteer for the group, talks passionately about the accomplishments of the OVC. “There has been a long history with Inyo County being ignored by LADWP and we now have the resources to challenge them in court if we need to.” And that is exactly what the Owens Valley Committee in conjunction with other citizens groups has done. A Memorandum of Understanding between the OVC, LADWP, the Sierra Club, the California Department of Fish and Game and the California State Lands Commission, was enacted in June of 1997. The MOU provided for a number of measures meant to mitigate the long-term impacts years of ground pumping have had on the area.

In spite of the accomplishments of the OVC and other groups, perhaps the most egregious impact of LADWP’s water diversion is in the form of air pollution from the Owens Valley Lake bed. Ted Schade from the Great Basin Air Pollution Control District spent some time with me to explain what his agency’s role is in the Owens Valley.

Sitting behind his neat desk, Ted launches into a story that starts with tiny dust particles called PM10. Driven by high-speed winds traveling through the valley and into the lungs of residents, safe levels of PM10 are in the low hundreds, but residents were breathing in levels as high as ten thousand. Another MOU was approved by the Environmental Protection Agency in October of 1999, “We made three recommendations for LADWP to mitigate the damage to air quality. They chose to allow previously diverted water back into the dry lake, and PM10 is now in the hundreds.” Ted pauses momentarily. “They will need to do more to get it to acceptable levels, but we are getting there.”

Though united in their fight against LADWP, one contradiction continued to make its way into every conversation I had with Owens Valley locals. Among those who expressed feelings of frustration, anger, and resentment were also feelings of appreciation and gratitude for the agency’s existence. The land LADWP has owned for the past decades remains undeveloped. As I drove past the sweeping vistas of the Sierra and White Mountain ranges, untouched by the hand of progress, that same mixture of feelings overcame me as well.

[Jennifer Fenton lives with her family in Pacific Grove, California. She has a Master’s Degree in Counseling Psychology and works with gang entrenched youth, addressing social and individual issues that lead to gang violence. Jennifer writes about politics with an emphasis on how national and international political decisions influence people’s daily lives.]

Thanks to Casey Porter / The Rag Blog

1 Response to Los Angeles and Owens Valley : An Epic Struggle Over Water