Manhattan and a Mouse: Variations on a Single Structural Theme 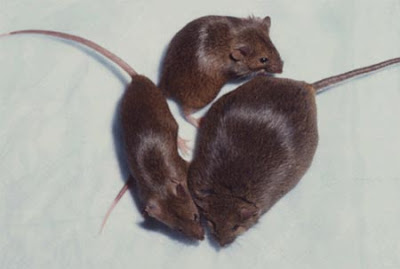 One of the pleasures of looking at the world through mathematical eyes is that you can see certain patterns that would otherwise be hidden. This article is about one such pattern. It’s a beautiful law of collective organization that links urban studies to zoology. It reveals Manhattan and a mouse to be variations on a single structural theme.

The mathematics of cities was launched in 1949 when George Zipf, a linguist working at Harvard, reported a striking regularity in the size distribution of cities. He noticed that if you tabulate the biggest cities in a given country and rank them according to their populations, the largest city is always about twice as big as the second largest, and three times as big as the third largest, and so on. In other words, the population of a city is, to a good approximation, inversely proportional to its rank. Why this should be true, no one knows.

Even more amazingly, Zipf’s law has apparently held for at least 100 years. Given the different social conditions from country to country, the different patterns of migration a century ago and many other variables that you’d think would make a difference, the generality of Zipf’s law is astonishing.

Keep in mind that this pattern emerged on its own. No city planner imposed it, and no citizens conspired to make it happen. Something is enforcing this invisible law, but we’re still in the dark about what that something might be.

Many inventive theorists working in disciplines ranging from economics to physics have taken a whack at explaining Zipf’s law, but no one has completely solved it. Paul Krugman, who has tackled the problem himself, wryly noted that “the usual complaint about economic theory is that our models are oversimplified — that they offer excessively neat views of complex, messy reality. [In the case of Zipf’s law] the reverse is true: we have complex, messy models, yet reality is startlingly neat and simple.”

After being stuck for a long time, the mathematics of cities has suddenly begun to take off again. Around 2006, scientists started discovering new mathematical laws about cities that are nearly as stunning as Zipf’s. But instead of focusing on the sizes of cities themselves, the new questions have to do with how city size affects other things we care about, like the amount of infrastructure needed to keep a city going.

The same pattern holds for other measures of infrastructure. Whether you measure miles of roadway or length of electrical cables, you find that all of these also decrease, per person, as city size increases. And all show an exponent between 0.7 and 0.9.

Now comes the spooky part. The same law is true for living things. That is, if you mentally replace cities by organisms and city size by body weight, the mathematical pattern remains the same.

For example, suppose you measure how many calories a mouse burns per day, compared to an elephant. Both are mammals, so at the cellular level you might expect they shouldn’t be too different. And indeed, when the cells of 10 different mammalian species were grown outside their host organisms, in a laboratory tissue culture, they all displayed the same metabolic rate. It was as if they didn’t know where they’d come from; they had no genetic memory of how big their donor was.

But now consider the elephant or the mouse as an intact animal, a functioning agglomeration of billions of cells. Then, on a pound for pound basis, the cells of an elephant consume far less energy than those of a mouse. The relevant law of metabolism, called Kleiber’s law, states that the metabolic needs of a mammal grow in proportion to its body weight raised to the 0.74 power.

This 0.74 power is uncannily close to the 0.77 observed for the law governing gas stations in cities. Coincidence? Maybe, but probably not. There are theoretical grounds to expect a power close to 3/4. Geoffrey West of the Santa Fe Institute and his colleagues Jim Brown and Brian Enquist have argued that a 3/4-power law is exactly what you’d expect if natural selection has evolved a transport system for conveying energy and nutrients as efficiently and rapidly as possible to all points of a three-dimensional body, using a fractal network built from a series of branching tubes — precisely the architecture seen in the circulatory system and the airways of the lung, and not too different from the roads and cables and pipes that keep a city alive.

These numerical coincidences seem to be telling us something profound. It appears that Aristotle’s metaphor of a city as a living thing is more than merely poetic. There may be deep laws of collective organization at work here, the same laws for aggregates of people and cells.

The numerology above would seem totally fortuitous if we hadn’t viewed cities and organisms through the lens of mathematics. By abstracting away nearly all the details involved in powering a mouse or a city, math exposes their underlying unity. In that way (and with apologies to Picasso), math is the lie that makes us realize the truth.

The new laws of infrastructure for cities are reported in:

For an overview of Kleiber’s law and the theory of West, Brown and Enquist, see:

Whitfield, J. (2006) “In the Beat of a Heart: Life, Energy, and the Unity of Nature.” Joseph Henry Press, Washington DC.

For the tissue culture results about mammalian cells, see:

This entry was posted in RagBlog and tagged Cities, Existential Angst, Science. Bookmark the permalink.