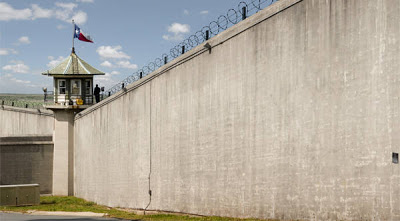 The Texas-U.S. border wall will protect Texans from foreigners who do not share their beliefs and customs.
Texas Constructs U.S. Border Wall To Keep Out Unwanted Americans
May 19, 2009

WICHITA FALLS, TX—Calling it an essential step toward securing the Texas border and protecting his people’s way of life, Gov. Rick Perry announced Tuesday the completion of a 1,953-mile wall designed to keep out millions of unwanted Americans.

According to Perry, the 75-foot-high barricade running along the northern boundary is the culmination of more than 160 years of escalating tensions between Texas and the United States.

Though a protective barrier has been under consideration for decades, the Texas Legislature voted unanimously to begin construction on the project immediately following the 2008 presidential election.

“As governor, it is my responsibility to do whatever’s necessary to maintain the territorial integrity of Texas,” Perry told reporters during a press conference held inside a sniper tower overlooking Oklahoma. “If you are a Texas citizen, you shouldn’t have to worry about some American coming in here, using your goods and services, and taking away your job.”

“Let the record show I have nothing personal against Americans,” Perry added. “I just think they should stay in America, where they belong.” 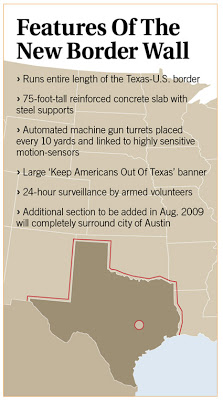 The wall is comprised of six security layers: a razor-wire fence equipped with motion sensors, surveillance cameras, and guard towers; a 70-foot-wide trench with expert marksmen stationed along its perimeter; a roadway patrolled by armed vehicles equipped with synchronized electromagnetic wave gradiometers to detect Americans attempting to tunnel their way into Texas; and a second, third, and fourth fence.

The final section of the barricade, a reinforced concrete enclosure containing the city of Austin, will be finished by August 2009.

“These Americans are destroying the moral and social fabric of our state,” said Rep. Chris Turner, who added that he worries when he looks around Texas and sees people from places like Pennsylvania, Iowa, and Vermont. “The man who used to repair my truck was replaced by some mechanic who moved in here from Kansas. Lately I can’t go to the store or the bank without running into all kinds of these foreigners. This wall is the only hope we have of keeping Texas safe.”

“The truth is, Americans are just different from us,” Turner added. “We don’t even speak the same language.”

According to Texas Army National Guard Brig. Gen. Tom Alford, Americans will only be permitted to cross the border if they have immediate family living in Texas, in which case they can apply for a 90-minute monitored visitation to be held inside a checkpoint detention facility.

However, Alford stressed that any American attempting to transport barbecue sauce, beef jerky, belt buckles, or longhorn cattle back to the United States will face the death penalty.

Thus far, a majority of Texas citizens support the border wall, with nearly 8 million signing up to join a coalition of Minutemen that will guard the fence.

“These good-for-nothing Americans want to come in here and wait in the same lines as me, watch the same movies, and eat at the same restaurants,” El Paso resident and border patrol volunteer Larry Carlile told reporters. “Who do they think they are? I’d never dare waltz into America and act like I owned the place. That country’s a godforsaken hellhole, anyway.”

“Round ’em up and get ’em out,” Carlile added. “Go back to Seattle or whatever you call it.”

Since the wall’s completion, there has been no official comment from Washington. However, sources close to President Obama said that upon being informed of Gov. Perry’s announcement the commander in chief muttered, “Thank God.”

Many thanks to Jeff Segal / The Rag Blog

This entry was posted in RagBlog and tagged Austin, Humor, Political Satire, Texas. Bookmark the permalink.