March Forth in Austin : Students and Faculty Protest Budget Cuts 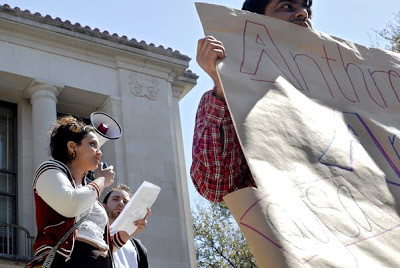 AUSTIN — On Thursday, March 4, more than 200 students and staff gathered at the West Mall of the University of Texas to participate in a National Day of Action to Defend Education. Together with workers and students across the country we rallied, spoke out, and marched.

Go here for a map showing actions that took place around the country.

The Texas State Employees Union (CWA Local 6186 – TSEU), to which I belong, is the largest union local in Texas. We have mobilized in protest of cuts and layoffs on campus since the late summer of 2009. We have collected, with the help of the Coalition, more than 3,000 signatures on a petition to support teachers and staff, stop the cuts, and oppose tuition hikes. for a copy of the petition.

First, let me cite a few statistics about the situation at UT-Austin.

I end the list with the closing of the Cactus Café because of its impact on our entire community. That’s the space where Townes Van Zandt and Lyle Lovett and Nancy Griffith played. Andy Smith, Executive Director of the Texas Union, who earns $138,603 a year, made the unilateral decision this year to close the Café. But the story is about much more than statistics.

One morning Jim Rubarth-Lay, a member of our union executive board and UT staff member for 17 years, came to work at 8 a.m. Jim was told to take a laptop, go home by 8:30, and not come back to work again. During the next month he was asked to complete a series of questions, kind of an exit interview, about the best and worst parts of his job. That was in September. Throughout October, Jim spent nearly every lunch hour on the West Mall helping organize our union with a sign “I was cut.” He still is unable to find full-time employment in Austin. The hardship on his family is extreme.

The man in charge of firing 70 workers in Jim’s unit (ITS) is Brad Englert, annual salary $175,000. Prior to his appointment at UT-Austin, Englert worked for the private company Accenture for 22 years, retiring as a senior partner. Accenture’s $899 million contract to privatize and outsource human services in Texas was canceled in 2007, but not until after an estimated 200,000 children had lost CHIP coverage due to Accenture’s incompetence. The Texas State Employees Union (TSEU) was proud to be in the leadership of the successful fight against the company and for the poor of Texas. Now Englert and his kind have found a new home at UT-Austin.

Labor unions often have been accused of putting the financial interests of their members ahead of the public good. This is a stereotype, used to drive a wedge between workers and students — to the detriment of both. We in TSEU believe in public education, we care deeply about students, and we see no contradiction between the needs of students and the needs of university workers.

We lobby the state legislature for an increase to state funding for UT and inclusion of university workers in an across the board pay-raise for all state workers. That’s how it used to be before 2001. We believe that every public worker is of value, not just a privileged few.

We believe in domestic partner benefits. The lack of equality is shameful.

We oppose tuition hikes, but if tuition is raised we believe that money must go to serve those who endure massive debt just to get a UT education. That means more, not fewer graduate students, more not fewer lecturers, more staff that directly serve students, more classes, smaller class sizes, more services to students and to the community.

Another union member among the many who were laid off is Urban Geographer Eliot Tretter. Dr. Tretter helped the union inform state legislators about the cuts, which resulted in a group of Austin legislative representatives meeting with UT-Austin President William Powers to force a response. Dr. Tretter is a well-known scholar, respected by students and colleagues, who integrates political economy and social theory with questions of urban governance, culture, and urban renewal. Dr. Tretter found out that he had no job by looking at the fall course schedule.

This is no way to treat people even in the hardest of times. But what angers me most is that it has nothing at all to do with budget shortfalls.

This month, UT bought a full-page ad in the Chronicle of Higher Education. It states there was a 7 percent increase in state funding last year. It brags that billions of dollars are available to hire star professors, support research, and build new facilities. The headline reads, “Texas can take you higher.” I don’t think that this is what Sly and his family had in mind.

We should be righteously angry.

We need to build organization on our campus, bringing workers into the union and students into progressive groups. We need to demand our right to transparency — what’s getting cut and where’s the money going? Faculty, staff, and students need votes; we need inclusion; and we need organizational representation with a share in decision-making. We need to stop the cuts now and in the future. By working collectively, we can create a university that is a place of greater substance, democracy, equality, and community. That’s quality education, more than any kind of excellence rooted in privilege and exclusivity.

March 4 was a beginning.

[Anne Lewis is an independent filmmaker frequently associated with Appalshop and a Senior Lecturer at UT-Austin. She was a speaker at the National Day of Action rally on the UT campus. Her film credits include: Morristown: in the Air and Sun, a working class response to globalization; Fast Food Women (POV and London Film Festival Judges’ Choice); On Our Own Land about a citizens’ effort to stop strip mining (duPont Award); and Associate Director, Harlan County, U.S.A. Anne Braden: Southern Patriot is co-directed with Mimi Pickering. Anne is a proud member of Local 6186 CWA-TSEU and CWA-NABET. Anne’s website is www.annelewis.org.]

3 Responses to March Forth in Austin : Students and Faculty Protest Budget Cuts