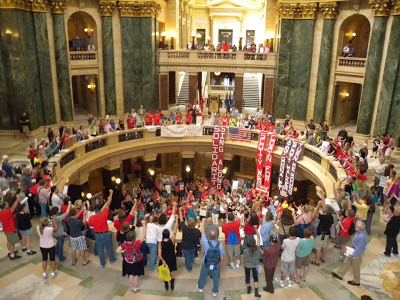 Dubbed the ‘longest continuously running singing protest in history,’ the Solidarity Sing Along is about to celebrate its 350th performance.

MADISON, Wisconsin — More than once, left-leaning music critics have pronounced the demise of the Seeger-esque, Almanacs labor-themed song. Along with Pete goes the whole genre of political folk revival, including, for the most disparaging, Bob Dylan and Joan Baez. A veritable mess of clichés, our critic snaps. This music, especially the lyrics, neither clever nor funny nor inspiring.

The appearance of Harry Belafonte and Pete Seeger himself at the Obama inauguration might have prompted some doubts in this judgment. The Seeger Sessions recorded by Bruce Springsteen in 2009 might have ratcheted up those doubts.

What happened in the Wisconsin Uprising of 2011-2012 provides an even more persuasive counter example. The Solidarity Sing Along, which began on March 11, 2011, with a small group of singers and a one-page song sheet, revived the protest song and made it a major component of the political movement.

The Solidarity singers responded in full voice to Governor Scott Walker’s curtailment of the collective bargaining rights of state workers. In shaping their protest, they mixed familiar civil rights anthems such as “We Shall Overcome” with the sacred songs of the union movement. Every weekday, they engage a shifting population of singers in songs touting the rights of working people, the meaning of class struggle, and, asserting, in words of Billy Bragg, “There Is Power in the Union.”

Solidarity singers continue to gather at the Capitol in numbers ranging from 20-30 to more than 200. Barring officially scheduled events, they circle the Rotunda floor, with their conductor strategically placed before the bust of Robert M. La Follette, the state’s most beloved opposition politician. 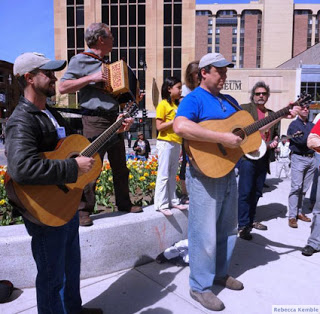 Solidarity Sing Along group outside Wisconsin State Capitol. Photo by Rebecca Kemble / The Progressive.
On other days they brave the cold winds, rain, and snow of the Wisconsin winter and, in recent weeks, revel in the unusually warm temperatures. For the outdoor gatherings (Walker banned all instruments from the Capitol), musicians bring an assortment of instruments — violins, guitars, mandolins, sousaphones, and squeeze boxes — and play together as “The Learning Curve” pick-up band.

The selection of songs varies from day to day, but every sing-along concludes with the group’s theme song, “Solidarity Forever.” A timely favorite is “Roll Out the Roll Call,” with new lyrics by Sheboyganites Frank and Mary Koczan. “Recall Scott Walker…/Give him a kick in the rear!/ Recall Scott Walker…./Toss him right out on his ear!” If the chorus of Ralph Chaplin’s labor classic routinely produces raised fists, the updated “Beer Barrel Polka” invariably stirs a few in the crowd to polka, German-style. This is Wisconsin, after all.

The driving force through all these performances has been R. Chris Reeder. Although he worked as an actor and stage technician before moving to Madison with his wife, Lisa Penning, Reeder had never directed anything musical before taking on the Solidarity Sing Along. But he is tall and limber and comfortable with occupying center-stage. His voice is distinctive and deep and carries high above the rumbling of a crowd. He says he lacks prior political experience, but was simply eager to jump at the opportunity to oppose Walker’s draconian anti-union legislation.

In a recent interview, Reeder described the sing-along as a source of empowerment for the singers as much as a political statement aimed at the public. It turns out to be both: tourists to Madison regularly drop in the Capitol either to watch from a distance or to join in the singing.

Invitations to conduct sing-alongs are now coming from distant parts of Wisconsin. Recently a small group made the six-hour drive to Ashland to lead a sing-along far “up north.” The Wisconsin Network for Peace and Justice, a coalition of activist groups founded in 1991, posts songbooks on its website and encourages communities throughout the state to start their own Solidarity Sing Alongs.

Reeder, who was born and raised near Seattle, is at home in Wisconsin. He finds his way to the Capitol between making deliveries to grocery stores for a local artisan bakery. He also receives a small stipend from the Wisconsin Network for Peace and Justice, and picks up a few extra dollars from the sale of Solidarity Sing Along t-shirts and sweatshirts emblazoned with the motto “This Is What Democracy Sounds Like.”

So intimate is Reeder with the several dozen regulars and hundreds of admirers that the details of the recent birth of his first-born, August, reached his many fans on the Solidarity Sing Along Facebook page and generated thousands of “likes.” 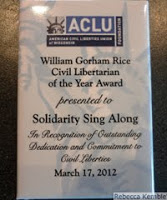 Heroes, even those possessing great charm, are created by the times, according to the old saw. When Walker tried to force the sing-along out of the Capitol, the singers stood their ground. At every performance, Reeder read the relevant passage in the state Constitution: “The right of the people peaceably to assemble, to consult for the common good, and to petition the government, or any department thereof, shall never be abridged.”

On March 17, 2012, the American Civil Liberties Union of Wisconsin presented Reeder, on behalf of the Solidarity Sing Along, a much deserved award, the William Gorham Rice Civil Libertarian of the Year Award “for the expression of the First Amendment rights of free speech and freedom of assembly.” Even more recently, Leadership Wisconsin, a group that promotes the development of leaders to strengthen communities, tagged Reeder for yet futher recognition.

Dubbed the “longest continuously running singing protest in history,” the Solidarity Sing Along is about to celebrate its “semiseptcentennial,” that is, its 350th performance on April 26th at the Majestic Theatre, Madison’s oldest theater, a former vaudeville house that opened in 1906. The event coincides with the release of a CD of its standard repertoire of songs, which were recorded in February at a local Unitarian Universalist church. (Authors’ disclaimer: we were there for the major session, but sang softly far from the microphone, befitting limited talents.).

The lyrics may not be deft prose, but topicality and regionalism have their place. Woody Guthrie’s iconic ballad now goes: “From Lake Geneva to Madeleine Island/ From the rolling prairies,/ to our lovely dairies,/ Wisconsin was made for you and me!”

Several songs have inspired hand and body gestures. The chorus of “Bring Back Wisconsin to Me,” with new lyrics by Madison folk favorites Lou and Peter Berryman, involves “swaying the Wisconsin Way,” first left, then right. “Roll the Union On” prompts the “rolling” of arm over arm. The ever-popular “Scotty, We’re Coming for You!” (written by the local Indie-Irish-Rock band, The Kissers) ends energetically with index fingers pointed at the Capitol.

It should also be added that the Solidarity Sing Along is nothing but a joyous occasion. We wonder: When in the history of labor choruses did the singer-amateurs have more fun? It’s sheer pleasure to sing the rousing lyrics adapted from Florence Reece’s beloved “Which Side Are You On?”: “Don’t believe the Governor/ don’t listen to his lies/ Working folks don’t have a chance,/ unless we organize!”

[Mary Jo and Paul Buhle are the editors of It Started in Wisconsin: Dispatches from the Front Lines of the New Labor Protest (Verso Books). This article was first published at The Progressive. Read more articles by Mari Jo and Paul Buhle on The Rag Blog.]