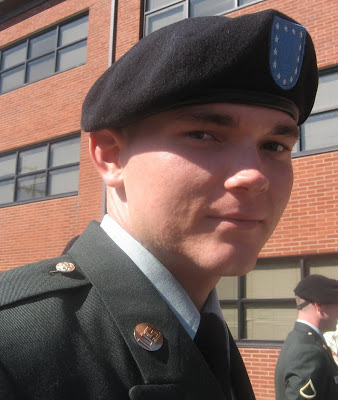 Those of you who read The Rag Blog compulsively, even unto the Comments, may have seen one or two such in which I’ve mentioned, without naming him completely, my nephew from North Central Texas, serving with the U.S. Army in Iraq.

Army Spec. Cody Ryan Patterson corresponded with his Auntie M. a bit, when he had Internet access. He sent me a piece of spam at one point, an arrogant, militaristic set of instructions to U.S. civilians on how service personnel should be treated when encountered here at home; it basically said that if a person had some issue with the mission, to keep it to him or herself or risk an “ass-kicking.”

I wrote back that I would turn Cody Ryan over my knee when he was home on leave! “If you’re not over there protecting my right to think and say what my conscience tells me, buster, you shouldn’t be wearing the uniform!”

He came right back at me, like a (very young) man, having what may have been one of his first sustained intellectual arguments with an adult relative. I sent him a Rag Blog story about Army resister Victor Agosto, and he was totally appalled by it; felt that Victor must be a coward and was glad he didn’t have anyone who felt that way in his unit, since they would be a danger to him.

He argued for duty and contractual obligation, and I argued for individual responsibility. But we ended each e-mail with hugs and kisses, reminders of the bond we shared.

Cody and I met when my youngest brother married his Mom, who came to us with a son and a daughter. He was a bright, mischievous, totally typical brown-eyed boy, and, like his sister and little-brother-to-come, an outgoing, affectionate kid who never said “Good-bye” to his aunts or his grandma without also saying, “I love you,” and giving a hearty kiss and hug. My affectionate nickname for him became “Code Blue,” for some reason I no longer recall.

He was a natural-born fisherman, but was allergic to fish. I bought him a copy of the first Harry Potter book when it was published, at the apparently perfect time to spark his interest in reading for a while, but it didn’t last. After my brother and Cody’s Mom split up, not what you’d call amicably, I didn’t see much of him.

Later, with no college-oriented funds, prospects, or ambitions, he left high school and went to work, but couldn’t find a job in Hill or Johnson counties that paid enough to get his own place, buy a reliable truck, and do the other things young men need to do. He would have gone to the Marines, but an old eye injury kept him out, and the Army got him instead.

Cody came home on leave a week ago. He was to have deployed to Afghanistan on Oct. 28. I’d hoped to see him and hug his neck before he left Texas again. But danger found him at 5 a.m. Saturday morning in his mother’s house in Blum. Cody was killed by someone he trusted. It was not a member of his family. The murder appears to have been premeditated, and a young woman has been arrested in connection with the crime

Cody was Army strong. He made it to the door of his mother’s room before collapsing against it, calling, “I’ve been shot” as he fell. Cody was dead before the ambulance and the police arrived. His sister and his Mom’s boyfriend both did CPR on him but to no avail.

I could go into a lot more detail here about the regular rural po’folks who are my family, could make it seem even more sordid, senseless, sad. But what is the difference, for a 20-year old boy-man, in dying in a village quarrel in Texas or in one halfway around the world, in somebody else’s village? What is the difference in hearing your son’s last gasps as he dies in your arms and in imagining them every night he is in harm’s way?

Army recruiters sealed their deal with Cody when they had him come to see them in Ft. Worth and put him up on the next-to-penthouse floor of a downtown hotel. He’d never been that far off the ground before.

After basic training, he called my brother, his former step-dad, to thank him for his efforts in requiring young Cody to be responsible, to do chores, and for extensive camping and hunting experiences; he felt infinitely more prepared than some of the guys he’d met in basic, who apparently cried for their blankies at night and ain’t never kilt a rabbit.

No one in Cody’s family can escape knowing that whatever facts may emerge, the young woman arrested is somebody’s child, and also somebody’s mother. We’re not naive enough to seek “closure,” or imagine that further tragedy will mitigate this one. But we will be looking for justice. That may be the only real difference between Blum and any hamlet of 300 souls in “Afraq.”

Some Rag Blog readers who’d read about my recent exchanges with Cody expressed good wishes for his upcoming deployment, that he would come home OK, with both his life and his sacred honor intact. I appreciated those good wishes for this good kid, and wanted to let you know, as his Mom reportedly said yesterday in her grief, that we “don’t have to worry for him anymore.”

[Editor’s note: This article has been revised, and a portion redacted, at the author’s request, due to concerns from the immediate family and in the interest of a continuing criminal investigation.

In the words of Mariann Wizard: “Last night, I made a mistake. I allowed speculation to creep into an otherwise factual story about my nephew’s life and death. I should have waited before submitting this article, should have run it by Cody’s family first, and I apologize for not having done so. I let my emotions carry me away. Thanks to all those who responded.”]