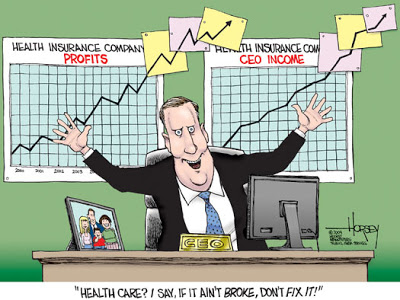 There are two especially devious ways that private health insurers use to keep their own profits high (and deny health care to consumers). The first is to cherry pick only healthy people to cover with insurance, and deny insurance to sick people or people with pre-existing conditions.

The second is to deny coverage for specific treatments to those with insurance. It is not uncommon for seriously ill people to find that their private insurance will not cover the treatment they need to get well. In many cases, these people die because they are unable to get the treatment their insurance company has refused to pay for.

The Baucus Bill, the health care reform bill approved by the Senate Finance Committee, would take care of the first problem. Private insurance companies would no longer be able to deny coverage to sick people or those with pre-existing conditions (or price that coverage out of the consumer’s reach). But it does nothing to fix the second problem.

In fact, an excellent article by Lisa Girion in the Los Angeles Times makes the point that the Baucus Bill would only make the second problem worse, and leave consumers no better off than they are now. After all, what good is private insurance coverage if that coverage will not pay for needed treatment?

Since they could not exclude sick people or those with pre-existing conditions, the insurance companies would be left with two choices to maintain their exorbitantly high profits — raise premiums or deny treatment. Of the two choices, the easiest option is to deny treatment — a choice that could easily be hidden in the policy’s fine print.

Considering the fact that private insurers already do this for many expensive procedures, is there any doubt that they would protect their profits by denying coverage even more often? I think that answer is self-evident. But there is a simple solution to this problem.

One might think the solution is to require coverage and payment of any treatment declared necessary by a doctor, but that won’t work. That would just raise the premium cost of private insurance, and in the Baucus Bill there is nothing by private insurance.

The real solution is to include a public option for insurance in the bill. A public option would cover those with pre-existing conditions, cover all necessary treatments and it would keep premium costs low (by significantly lowering overhead among other things). This would force the private insurers to do the same, or lose consumers to the public option.

Senator John D. Rockefeller (D-W. Virginia) says, “We’ve seen all the insurance industry tricks — hiding rules in fine print, cutting people off when they get sick, and refusing to pay for necessary treatment because of pre-existing conditions. This is why I am fighting for a public option — we need an insurance option out there that puts people first, not profits. We need a real public option, one that competes with private insurance companies to keep them honest and accountable.”

There are those who think the public option would drive private insurers out of the health insurance business. Personally, I don’t care. There are plenty of other things they can insure.

It comes down to a choice. Which is more important — protecting private insurers or providing necessary treatment for sick Americans? I choose the latter.