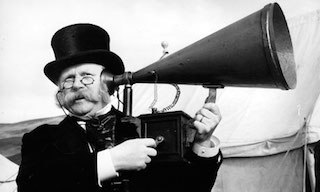 Entering a testy twilight,
is my vision grown so dim?
Or has everyone gone deaf?
Didn’t you hear us the first time?

Nuclear power is an abomination.
War is harmful to children and other living things.
Mother Nature doesn’t make mistakes.
And please, keep your religion out of my free will!

We’re getting tired of fighting the same battles
over and over again,
winning, and having victory
snatched from our grasp;
tired, but nobody’s quitting;
it’s too important and besides
what else would we be doing?
Taking some fantasy cruise
on a Carnival death ship?
(Believe It Or Not: it’s cheaper to live on cruise ships
than in retirement homes!)
If they’d legalized weed maybe we’d all be stone junkies by now;
yeah, all peaceful and meek, that’s the ticket;
but today they’re throwing the grandkids under the bus
and the question has become,
Didn’t you hear us the first time?

Boomer sundown is coming.
Naptime is over,
and “Jeopardy” isn’t a game.
Who the hell listens to all those conversations they’re recording,
and who reads all our so-called private mail?
Is that the career path of the future?
And really, what can they do to us that’s any worse than what life itself brings?

Tune up the drums, Sisters and Brothers;
arm your wheelchairs with nunchukas
and your walkers with ninja stars!
Summer’s here and the time is right
for howling in the streets because apparently
they didn’t hear us the first time.

[Mariann G. Wizard, who now lives in Belize, was a decades-long Austin-based writer and activist — and was one of the originators of The Rag‘s print version and an early contributor to/supporter of The Rag Blog. This poem is from her last collection (Didn’t You Hear Me the First Time? and End Games). Her new collection, Tempted to Tell All, is avidly anticipated by her many fans.]

4 Responses to Mariann G. Wizard :
VERSE | Didn’t You Hear us?