Roy Casagranda :
The U.S. is in trouble

We cannot even stand to live next to
each other. 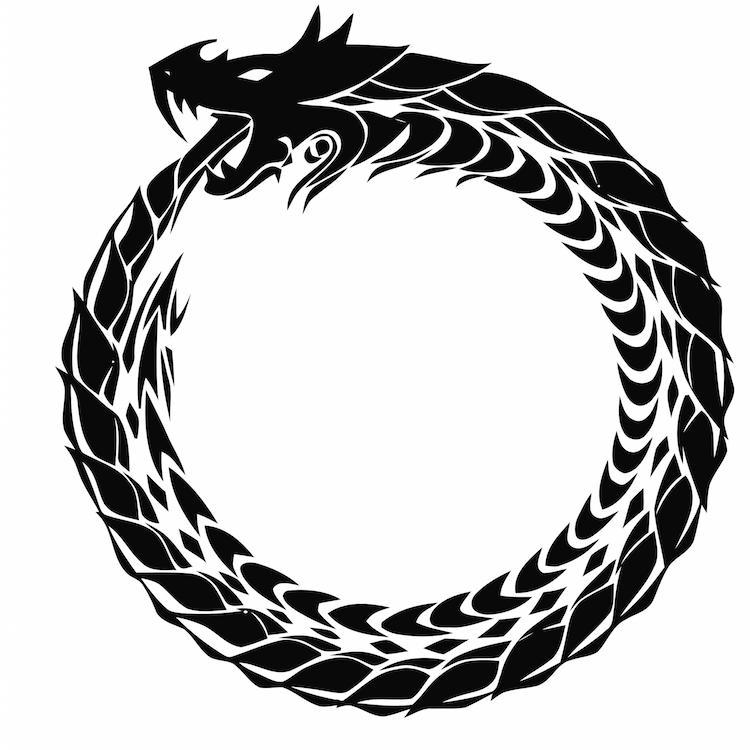 The Ouroboros, the snake that eats its own tail, is a symbol of infinity or wholeness. Except, in the case of the United States, the snake may simply be eating itself.

I think the U.S. is in trouble. That is not necessarily a bad thing. It might give us an opportunity to remake ourselves. We have been an imperialist genocidal murder machine since the beginning. A new start is in order. My fear is that when a violent state starts to unravel instead of going down with grace they usually go down in a violent fit of refusing to see reality.

USers are terrible at reality. I think that the average Third World state’s population has as good of an understanding as the average USer. And by “in trouble,” I don’t just mean because of global warming or running out of oil, or even our debt crisis and failing infrastructure.

I mean the way we interact with each other. We have become so polarized that the last time it was like this, it was 1860. One way this will manifest itself is in the November 2018 elections. No matter what the results are, blue tsunami, blue wave, blue breeze, or red beaches, half of the U.S. is going to believe that there was cheating.

No state survives forever (although Rome really pulled off an amazing run — 2,205 years!). Civil war and secession is always a historical threat. A recent example, of course, is Brexit, The UK is likely to break up because of Brexit. Yugoslavia, Czechoslovakia, and the USSR. Belgium might break up. I mean the future looks like more states, not less. And there is serious secessionist sympathy in Hawaii, California, Texas, and Vermont. And the divide between the left and right is so bad we don’t just unfriend and block each other.

We have already become two states to a degree. People have been sorting themselves out ideologically by state, county, city, school, and even neighborhood. Robert Putnam wrote a book about this sorting out. We cannot even stand to live next to each other. And when people have fear they act crazy.

Something has to give. A crisis to rally around, reinvestment in education, a massive party realignment, protests, another 1960s, something. But if it doesn’t and we do have a civil war, it might save the rest of the world a lot of grief. It might spare the rest of the world from more Iraqs, Syrias, and Libyas.

[Roy Casagranda is Professor of Government at Austin Community College where he teaches U.S. and Texas politics. His areas of research include Middle Eastern history and politics, U.S. foreign policy, political philosophy, and warfare. He recently completed an ad hoc interdisciplinary Ph.D. at the University of Texas at Austin. Casagranda serves as an analyst on Middle East Political Affairs for the Austin ABC affiliate, KVUE, and for Rag Radio, and has written about Arab and U.S. politics and history for several publications in Iran.]