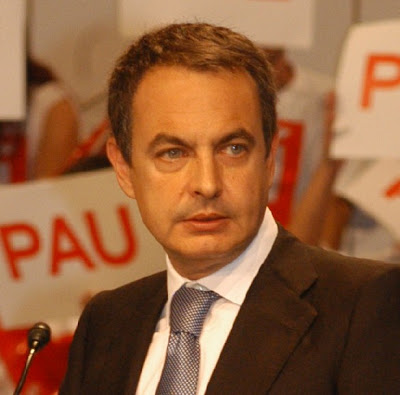 Spain’s Prime Minister, José Luis Rodríguez Zapatero. Now let’s see: where is Spain again?
Or worse: Is it an expression of policy towards a U.S. ally?

‘McCain has run on his foreign policy expertise and such confusion completely undercuts his credibility’
By Max Bergmann / September 18, 2008

Worse than Bush. There can be no doubt about it now.

In McCain’s bizarre interview with Spanish Owned Union Radio he refused to say whether he would meet with Spain’s Prime Minister, José Luis Rodríguez Zapatero. Listening to the interview repeatedly, it simply seemed that McCain had no idea who Zapatero actually was. McCain seemed to think he was a Latin American autocrat – despite the reporter repeatedly saying “I am talking about Spain.”

This gaffe would seem to have very significant implications. Not knowing who the leader of Spain was or thinking Spain was in Latin America would not really be shocking coming from his running mate, but . Furthermore this gaffe would bring up real questions about his age. Is McCain really prepared to deal with a crisis at 3AM, when he can’t even remember who the leader of Spain is during a late evening interview?

But was it a gaffe? While it definitely seemed so, now Randy Sheunemann, McCain’s foreign policy adviser is shockingly saying that this is not a gaffe but an intentional expression of policy toward Spain. Instead of just admitting that it was small gaffe late in the day, the McCain campaign has decided that they care so little about governing that they are willing to potentially nuke the U.S.-Spain relationship just to get elected. Sheunemann emailed the Washington Post, saying:

McCain won’t meet with a NATO ally, that has nearly 1,000 troops in Afghanistan, that has lost more than 20 soldiers there, has been brutally attacked by Al Qaeda, is incredibly influential in Latin America, has the seventh largest economy in the world, is a DEMOCRACY, and is a large and influential country in the EU. Won’t meet with them?

The only plausible explanation for McCain not wanting to meet with Zapatero, is that, like Bush, he is still angry about Spain pulling its troops out of Iraq in 2004. If McCain carries that much of a grudge then how in the world will he rebuild our relationship with Europe, as he has said he would do. In a big foreign policy speech to the Los Angeles World Affairs Council in March, McCain expressed a desire to strengthen the transatlantic relationship.

We cannot build an enduring peace based on freedom by ourselves, and we do not want to. We have to strengthen our global alliances as the core of a new global compact…The bonds we share with Europe in terms of history, values, and interests are unique. Americans should welcome the rise of a strong, confident European Union as we continue to support a strong NATO.

McCain even told El Pais, Spain’s major newspaper, in April that he would bring Prime Minister Zapatero to the White House. (translation via America Blog)

Republican presidential candidate, John McCain, is ready to change the policy of estrangement with the Spanish government that was put in place for four years now by George Bush. He declared that he was ready to fully normalize bilateral relations and that Jose Luis Rodriguez Zapatero was invited to the White House.

And does McCain not know that his campaign has already met with a representative of Zapatero’s office? From the BBC in April:

Recently, Bernardino Leon, who is currently heading the General Secretariat of the Prime Minister’s Office to attempt to foster Zapatero’s interest in international issues, travelled to Washington to meet the foreign policy advisers to Democratic candidates Hillary Clinton and Barack Obama and to Republican candidate John McCain. [BBC Monitoring 4/22/08]

But Sheunemann’s statement now makes it clear that there will be no rebuilding of the transatlantic relationship. Instead, McCain will continue the ruinous approach of the Bush administration and continue to alienate our allies and further isolate America. This should not come as a surprise. McCain has after all shown in the past a reckless eagerness to attack America’s allies.

See below for some of his more prominent attacks:

McCain attacked our allies as “vacuous and posturing” for opposing war in Iraq. “Sen. John McCain (R-Ariz.) said that “Iraq is the test” of both the U.N. and NATO. He charged that the alliance is failing the test because of the “flawed calculations” and “vacuous posturing” of Germany and France. McCain and Rumsfeld both said that recent French and German foot-dragging over even discussing the possible deployment of NATO assets, such as Patriot anti-missile batteries, to Turkey also threatened to damage the alliance.” [Washington Post, 2/9/03]

John McCain engaged in the anti-French bashing of the far right because they opposed the invasion of the war. “The Lord said the poor will always be with us, and the French will be with us, too,” said McCain, a member of the Armed Services Committee. “This is part of a continuing French practice of throwing sand in the gears of the Atlantic alliance. But now they’re playing a dangerous game, and coming close to rendering themselves irrelevant.” A few days later he even said that, “Sen. John McCain (R-Ariz.) likened France to an aging ’40s starlet “still trying to dine out on her looks but doesn’t have the face for it.” [NY Times, 2/14/03. NY Daily News, 2/17/03]

McCain attacked Germany for opposing the war – saying they lacked “political courage.” McCain said that former German Chancellor Gerhard Schroeder “looks little like the ally that anchored our presence in Europe throughout the Cold War…A German Rip Van Winkle from the 1960s would not understand the lack of political courage and cooperation with its allies on the question of Iraq exhibited in Berlin today.” [Washington Times, 2/14/03]

On the war path, McCain said didn’t care if invading Iraq damaged UN, thought Iraq would prove UN to be irrelevant. “If war is necessary, the United States will not ‘be going it alone,’ he said, but will wage war in Iraq with a coalition of allies – with or without the blessing of the United Nations. ‘The problem here is not whether we do damage to the United Nations if we have to take military action,’ he said. ‘The question is, will the United Nations follow the League of Nations and risk irrelevancy.'” [Washington Times, 2/14/03]

At German security conference in the run up to the war McCain echoed Rumsfeld’s notorious attacks on our European allies. “Rumsfeld has made headlines across Europe in recent weeks for a series of barbs at those who oppose U.S. policy.” McCain clearly echoed Rumsfeld’s statements, “McCain accused the Germans and French of “calculated self-interest” and “vacuous posturing” that left NATO with a “terrible injury.” German Foreign Minister Joschka Fischer said Germany would support its ally Turkey, but the question was one of timing. Both German and French officials have said that such a vote is tantamount to admitting war’s inevitability. The conference’s most emotional moment came from Fischer…he told how three times he had led the charge for German troops to be deployed: in Kosovo, Macedonia and Afghanistan…His voice rising, and beginning to speak in English, he addressed Rumsfeld directly: ‘My generation learned you must make a case and, excuse me, I am not convinced.’ Rumsfeld sat against the wall, sipping water and watching without expression. Much was said at the meeting about the strident tone of U.S.-European discussions.” [Philadelphia Inquirer, 2/9/03]

McCain rejected calls to get more international troops on the ground in Iraq. McCain said, “I think that the only military presence required right now would be American and British.” [MSNBC Hardball, 4/23/03]