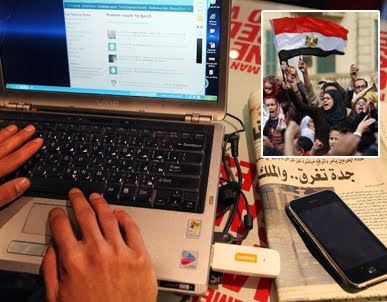 In Egypt, a Facebook page administrator known only by the handle El Shaheeed, or Martyr, is one of the driving forces behind the historic protests. Mike Giglio tracks down the mysterious figure, who talks about his crucial role in organizing the demonstrations.

Iran’s Green Revolution had a martyr named Neda, a 26-year-old woman gunned down in the streets of Tehran. Tunisia’s was Mohamed Bouazizi, an unemployed university graduate who set himself ablaze outside a government building. Egypt’s is Khaled Said — because someone has been agitating under the dead man’s name.

Said, a young businessman from Alexandria, was reportedly beaten to death by local police this summer — well before rumblings of the country’s current unrest. But a Facebook page that bears his name has been one of the driving forces behind the upheaval that started last week .

The anonymous Facebook page administrator who goes by the handle El Shaheeed, meaning martyr, has played a crucial role in organizing the demonstrations, the largest Egypt has seen since the 1970s, that now threaten the country’s authoritarian regime.

Yet even Egypt’s most active activists have no idea who the anonymous organizer is.

Esraa Abdel Fatah, who earned the nickname “Facebook Girl” when she organized a nationwide strike through her page in 2008, said she and her activist colleagues were in constant communication with El Shaheeed as they worked to coordinate the protest push, but still didn’t know his or her identity. “No one knows” who it is, she said.

“This is very important,” said veteran activist Basem Fathy, of the anonymity. “People find this credible.”

“El Shaheeed is a dead man who everyone is rallying around,” said a U.S.-based activist in close contact with Egypt’s protesters. “But who’s doing this? There is no gender. There is no name. There is no leader. It is purely about the thought.”

In a series of interviews with Newsweek/Daily Beast that spanned from the initial Tuesday protest’s early planning stages to the hours before Cairo’s Internet was blocked in the chaos that ensued, El Shaheeed refused to reveal even the smallest personal detail. But the conversations, which were conducted over Gmail Chat, offered a window on the thoughts and fears of one of the most intriguing actors behind Egypt’s swelling democracy push.

“El Shaheeed is a dead man who everyone is rallying around.”

“I’m taking as much measures as I can to remain anonymous,” said El Shaheeed. “But of course I’m scared.”

At home in Cairo, Wael Khalil, a democracy activist since 2004, saw the post and scoffed. “Come on,” he remembers thinking. “We can’t have a Facebook revolution. Revolution has no time and hour.”

In a conversation days before that first protest, El Shaheeed said T­­unisia had given people a sense of hope — something the activist wanted to corral, using social-media tools. “A lot of Egyptians lost that hope years ago,” El Shaheeed said. “Now people start to pay more attention to the activists, and there is a hope that we can make it.”

At the time, the page had over 375,000 followers. “The power of Facebook is that our updates reach to everyone’s wall,” El Shaheeed said. “Some of the videos we publish get shared on people’s walls more than 30,000 times. That’s how powerful a virus can be… Once it’s out, it goes everywhere. It’s unstoppable.”

However, El Shaheeed also cautioned against investing too much power in social-media tools — online calls to protests had fallen flat in the past, and, at the end of the day, people would have to leave the screens for the streets.

With that in mind, El Shaheeed stressed interaction with fans of the Facebook page — constantly polling, corresponding, and asking for advice, and posting downloadable fliers that could be passed out in person. “My role is to motivate people, inform them, encourage them to be part of the event and not just report it,” said El Shaheeed, hoping that if enough people got into the streets, the movement would become unstoppable.

To that end, El Shaheeed also coordinated with activists on the ground, such as Khalil, who quickly signed on. For years, groups like the April 6 Student Movement and its pro-democracy brethren had laid the groundwork — organizing logistics and having lawyers on hand to track down those arrested, who might otherwise disappear into police custody. Those groups, too, had followings on Facebook and Twitter, and in the days leading up to the protests, managed to get thousands of fliers onto the street.

On the Facebook page, El Shaheeed took pains to avoid political and religious language in the posts, wanting to bring together groups that had otherwise often competed. Stripped of ideological overtones, the page became a draw for longtime activists as well as regular people. The language was emotional but conversational and filled with slang. “It’s not someone talking to the people,” said Khalil. “It’s someone talking with the people.”

“On Tuesday, I saw you who love Egypt — conscientious, respectful, educated youth,” said a message on the Facebook page, after the first mass protests Tuesday. “You who walked and moved to clean up streets — because these are the streets of Egypt. Not a single act of sexual harassment. Not a single fight. Youth are dreaming, and they want the chance. And we will have our dream. I swear to God it’s very close. If only we would unite.”

Protesters hadn’t brought political banners to the demonstrations but instead carried the Egyptian flag; men and women, rich and poor, Christians and Muslims, were suddenly marching together. “I can’t believe it,” El Shaheeed said in a message a day after the protests. “No one can think what will happen next — including Mubarak.”

With the next protest scheduled for that Friday, activists including El Shaheeed were busy coordinating their response to what they believed would be a brutal government crackdown. A Google document with a list of demands as well as instructions for the demonstrations was, at one point, viewed at the same time by more than 200 people, altered in real-time by dozens of editors.

In a harried conversation on the eve of Friday’s protests, El Shaheeed vowed to stay anonymous even if the revolution succeeded. “This is not about me,” El Shaheeed said. “This is about the people of Egypt. I want to go back to my real life. I don’t want any glory. I wasn’t seeking it to start with.”

Two days later, Wael Khalil stood among thousands of other people in Tahrir Square, the epicenter of the demonstrations. The protests called for Friday had continued into the next evening, seemingly tipping the balance of power.

Police stations across the country had been overrun; the National Party Headquarters had been burned to the ground; faced with tens of thousands of demonstrators, police had disappeared. On the tanks that had taken their place, protesters scribbled pro-democracy slogans without interference from the soldiers.

In a telephone call, Khalil said that he hadn’t heard from El Shaheeed since Thursday night; with the Internet still down, the Facebook page had been inactive ever since. But perhaps there was no more use for it — it had played its role.

Fires still burned on the streets of the capital; in their flickering light, people huddled together to talk openly about revolution for the first time in many years.

Perhaps somewhere in the crowds was El Shaheeed.

[Mike Giglio is a reporter at Newsweek. This article was posted at The Daily Beast.]