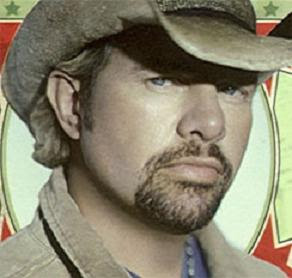 Despite his background as a comedian, Stephen Colbert is known by many of the authors who have appeared on his show as one of the toughest interviewers in the business. But on July 28, when country music superstar Toby Keith stepped on the set of the Colbert Report to promote his movie, Beer For My Horses, he was greeted by his host with nothing less than reverential admiration. After a jovial, back-slapping sit-down with Keith, Colbert turned the stage over to his guest for a performance of the song that inspired the title and theme of his forthcoming “Southern comedy.”

While Keith belted out “Beer For My Horses,” Colbert’s studio audience clapped to the beat, blithely unaware that they were swaying to a racially tinged, explicitly pro-lynching anthem that calls for the vigilante-style hanging of car thieves, “gangsters doing dirty deeds…crime in the streets,” and other assorted evildoers.

The lyrics to Keith’s ode to lynching are as follows:

Grandpappy told my pappy back in my day, son
A man had to answer for the wicked that he’d done
Take all the rope in Texas
Find a tall oak tree, round up all of them bad boys
Hang them high in the street
For all the people to see

That Justice is the one thing you should always find
You got to saddle up your boys
You got to draw a hard line
When the gun smoke settles we’ll sing a victory tune
And we’ll all meet back at the local saloon
And we’ll raise up our glasses against evil forces singing
whiskey for my men, beer for my horses

During the days when Toby Keith’s “Grandpappy” stalked the Jim Crow South, lynching was an institutional method of terror employed against blacks to maintain white supremacy. According to the Tuskegee Institute, between the years 1882 and 1951, 3,437 African-Americans were lynched in the United States, mostly in the heart of Dixie. Felonious assault and rape (read: corrupting “the flower of white womanhood”) were the two most frequent justifications for lynch mob actions. 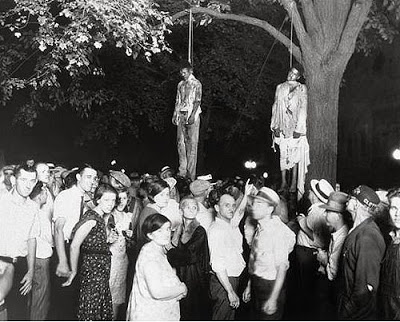 Toby Keith: “Hang ’em high in the street, for all the people to see”
Georgia was ground zero for lynch mob activity. Though most of the Peach State’s victims were black, one of its most high-profile hangings claimed the life of a Jew, Leo Frank. Frank, a college-educated Northerner, was wrongly convicted in 1913 of murdering a 13-year-old girl after a show trial in which his prosecutor portrayed him to a grand jury as a bisexual pervert. Before the trial, one juror remarked, “If I get on that jury, I’ll hang that Jew for sure.”

A crowd gathered outside the courtroom as soon as the verdict came down. “Hang the Jew!” they chanted. Above the mob’s cries rose the voice of a country fiddler named John Carson who had come to debut his ode to Frank’s supposed victim, Mary Phagan. He sang:

Leo Frank he met her
With a brutish heart, we know;
He smiled, and said, “Little Mary,
You won’t go home no more.”

The terrifying spectacle outside the courtroom prompted Jewish families to flee Atlanta in droves. Two years later, after the governor commuted Frank’s sentence, a lynch mob spirited Frank from his prison cell, dragged him into the woods and lynched him — from “a tall oak tree,” as Toby Keith sang.

Those who doubt the presence of racist undertones in Keith’s “Beer For My Horses” should see the song’s video. (The embed link to the video’s Youtube version was disabled by Keith’s record label so you have to click here to watch it). Cue ahead to 3:00 and watch as Keith intones, “We got too many gangsters doin’ dirty deeds.” The singer’s words are not-so-subtly accompanied by the image of a swaggering black man sporting short dreads and baggy clothes. Thus the profile of Keith’s ideal lynching candidate is revealed.

Keith’s whirlwind publicity tour continues on July 30 with his appearance on CBS’s Early Show, then sit-down interviews with Esquire Magazine and Us Weekly. The following week, Jay Leno will play host to another raucous rendition of “Beer For My Horses.” Thanks to Keith and his unsuspecting hosts, lynching is becoming cool again.

Update: The trailer to Keith’s “Beer For My Horses” identifies the film’s lead villian: a dark-skinned “Mexican guy” who traffics drugs and kidnaps the girlfriend of Keith’s character.