Pvt. LaVena Johnson ‘Committed Suicide’ and ‘Was Not Brutally Raped and Murdered’ 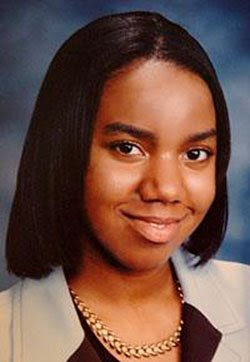 They don’t care. They put on a uniform and they say honor and integrity and they have no morals, no honor and no integrity, and I don’t even know how to sleep at night.

Pvt. LaVena Johnson, 19, was so excited to tell her mother that she was definitely going to be home from Iraq for Christmas, her favorite time of year. The next day, she was dead.

The military’s casualty liaison told the Johnson family she committed suicide, found dead in her barracks with a gunshot wound to the head. However, two separate contacts told LaVena’s father, Dr. John Johnson, that she was found dead in a contractor’s tent. Allegedly, a trail of blood led from the contractor’s tent into her tent, suggesting she was dragged there. Her tent was lit on fire, according to the witness who found her body.

This was back in July 2005. Over the years, more information has slowly come to light. Some of the evidence that contradicted the Army’s version of events was obvious.

“She’s right handed, and the bullet hole was on the left side of her head,” Dr. Johnson said in an interview with Amy Goodman on Democracy Now. When he brought up the bullet wound, a military investigator told him it was actually an exit wound from an M-16 rifle.

In addition to being a doctor, Johnson is also a veteran. He knows an M-16 is 40 inches long and that a woman his daughter’s size (she was 5’1″) would have trouble getting such a weapon into her mouth. Even if she did, the force of an M-16 would do much more damage than the small bullet wound on her left temple.

Moreover, the military’s own residue tests indicate she may not have even handled the weapon that supposedly killed her, and the bullet was never found.

He said that once he was able to examine his daughter’s body, he saw that plastic surgery had been done to disguise wounds to her face, including a broken nose, loose teeth, and a busted lip. Her gloves had been glued to her hands to hide burns on her skin.

At first, Dr. Johnson received only airbrushed, black-and-white photos of the scene of his daughter’s death when he requested information from the Army. There was also a mysterious photocopy of a CD. Dr. Johnson went through a letter-writing war with the Army to get more information from the investigation, eventually having to file a Freedom of Information Act request to get a copy of the CD.

“It was a horrible sight,” Johnson said of the uncensored, color photos of his daughter’s body on the CD. The photos showed bruises, scratches and teeth marks on her body. Her elbow was distended. He said the pictures showed what looked like lye or some other caustic substance had been poured on his daughter’s vaginal area, ostensibly to eliminate DNA evidence of rape.

Dr. Johnson said some of LaVena’s colleagues in Iraq told him she had been murdered. One friend told Johnson the Army was actively covering up for his daughter’s murderer. Two others said she had a great deal of money on her person at the time of her murder, but her family was given only three pennies. Also, her military debit card was never found, though she had used it hours earlier. When Johnson’s father mentioned the money, military investigators did not respond.

Despite all the evidence, the Army says the Johnson case is closed. The Johnsons say they received a letter from the House Armed Services Subcommittee concluding an investigation into the matter that stated satisfaction with the military’s version of events.

According to Col. Ann Wright, a retired 29-year veteran of the U.S. military who is working with the Johnson family, 98 military women have died in the current wars in Iraq and Afghanistan. Of those deaths, 40 have been non-combat related. Of those, 19 have been considered suspicious. After investigation, 13 of those suspicious deaths were ruled suicides.

In an article for CommonDreams.org, Wright tells the stories of 15 suspicious deaths of military women deployed overseas since 2003 that still require investigation; eight are classified as suicides.

One case showed striking similarities to Johnson’s. Pvt. Tina Priest was raped and later found dead in her room. The military said she died from a self-inflicted bullet wound from an M-16. When Priest’s mother questioned how that would be physically possible (Priest was about the same height as Johnson), the Army said Priest must have fired the weapon with her toe.

There is an online petition from the group ColorOfChange.org calling Congress to push for further investigation of Johnson’s death. The group explains that this effort is about more than just Johnson’s case:

“LaVena’s death is part of a disturbing pattern of cases where female soldiers have been raped and killed, and where the military has hidden the truth and labeled the deaths suicides. In virtually all cases, Congress has been slow to investigate or hold the military accountable in any way. Unfortunately, most families simply don’t have the resources, time, and psychological strength to push back.”

Andre Banks, deputy director at ColorOfChange.org said that the petition, which already has 25,000 signatures, hasn’t been delivered to Congress yet. He said the House Oversight Committee hasn’t agreed to have a hearing specifically about Johnson’s death, but that a hearing on sexual assault in the military scheduled to occur this Thursday in the committee’s National Security and Foreign Affairs Subcommittee may yield news:

“We’re hoping LaVena’s case will come up then.”

Rep. Henry Waxman (D-CA), Oversight Committee chair, held a hearing last year on the military lying to the public in the cases of Cpl. Pat Tillman’s death and Pvt. Jessica Lynch’s rescue. Those infamous cases had already received a great deal of media coverage by the time Waxman held the hearing. Before the hearing, Pat Tillman’s mother Mary was quoted by The New York Times as dismayed by the treatment her son’s case received, but also worried about what other military families could be going through.

“This is how they treat a family of a high-profile individual,” she said. “How are they treating others?”

The fact that Pat Tillman was a well-known figure helped the truth emerge about the events surrounding his death. The fact that Pvt. Johnson’s father was a doctor with the courage to examine his own daughter’s broken corpse might be the only reason the truth may eventually come out about her death.

Pushing for the truth from the U.S. military takes more resources than some people can sacrifice. How many families without famous faces or special expertise have been lied to?

Military culture encourages lying about the instances of rape in the military, while the chances of being sexually assaulted by military personnel are on the rise. The military has gone from covering up suicides to using them to cover up for murder. The culture of deception that has flourished in this administration clearly knows no bounds, not even the tearful anguish of military families that just want to know the truth.

1 Response to Pvt. LaVena Johnson ‘Committed Suicide’ and ‘Was Not Brutally Raped and Murdered’