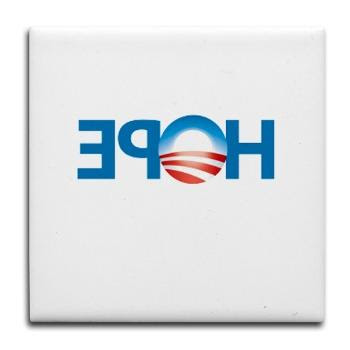 In Obamafanland:
A Lexicon of Disappointment

All is not well in Obamafanland. It’s not clear exactly what accounts for the change of mood. Maybe it was the rancid smell emanating from Treasury’s latest bank bailout. Or the news that the president’s chief economic adviser, Larry Summers, earned millions from the very Wall Street banks and hedge funds he is protecting from reregulation now. Or perhaps it began earlier, with Obama’s silence during Israel’s Gaza attack.

Whatever the last straw, a growing number of Obama enthusiasts are starting to entertain the possibility that their man is not, in fact, going to save the world if we all just hope really hard.

This is a good thing. If the superfan culture that brought Obama to power is going to transform itself into an independent political movement, one fierce enough to produce programs capable of meeting the current crises, we are all going to have to stop hoping and start demanding.

The first stage, however, is to understand fully the awkward in-between space in which many US progressive movements find themselves. To do that, we need a new language, one specific to the Obama moment. Here is a start.

Hopeover. Like a hangover, a hopeover comes from having overindulged in something that felt good at the time but wasn’t really all that healthy, leading to feelings of remorse, even shame. It’s the political equivalent of the crash after a sugar high. Sample sentence: “When I listened to Obama’s economic speech my heart soared. But then, when I tried to tell a friend about his plans for the millions of layoffs and foreclosures, I found myself saying nothing at all. I’ve got a serious hopeover.”

Hoper coaster. Like a roller coaster, the hoper coaster describes the intense emotional peaks and valleys of the Obama era, the veering between joy at having a president who supports safe-sex education and despondency that single-payer healthcare is off the table at the very moment when it could actually become a reality. Sample sentence: “I was so psyched when Obama said he is closing Guantánamo. But now they are fighting like mad to make sure the prisoners in Bagram have no legal rights at all. Stop this hoper coaster-I want to get off!”

Hopesick. Like the homesick, hopesick individuals are intensely nostalgic. They miss the rush of optimism from the campaign trail and are forever trying to recapture that warm, hopey feeling-usually by exaggerating the significance of relatively minor acts of Obama decency. Sample sentences: “I was feeling really hopesick about the escalation in Afghanistan, but then I watched a YouTube video of Michelle in her organic garden and it felt like inauguration day all over again. A few hours later, when I heard that the Obama administration was boycotting a major UN racism conference, the hopesickness came back hard. So I watched slideshows of Michelle wearing clothes made by ethnically diverse independent fashion designers, and that sort of helped.”

Hope fiend. With hope receding, the hope fiend, like the dope fiend, goes into serious withdrawal, willing to do anything to chase the buzz. (Closely related to hopesickness but more severe, usually affecting middle-aged males.) Sample sentence: “Joe told me he actually believes Obama deliberately brought in Summers so that he would blow the bailout, and then Obama would have the excuse he needs to do what he really wants: nationalize the banks and turn them into credit unions. What a hope fiend!”

Hopebreak. Like the heartbroken lover, the hopebroken Obama-ite is not mad but terribly sad. She projected messianic powers on to Obama and is now inconsolable in her disappointment. Sample sentence: “I really believed Obama would finally force us to confront the legacy of slavery in this country and start a serious national conversation about race. But now whenever he seems to mention race, he’s using twisted legal arguments to keep us from even confronting the crimes of the Bush years. Every time I hear him say ‘move forward,’ I’m hopebroken all over again.”

Hopelash. Like a backlash, hopelash is a 180-degree reversal of everything Obama-related. Sufferers were once Obama’s most passionate evangelists. Now they are his angriest critics. Sample sentence: “At least with Bush everyone knew he was an asshole. Now we’ve got the same wars, the same lawless prisons, the same Washington corruption, but everyone is cheering like Stepford wives. It’s time for a full-on hopelash.”

In trying to name these various hope-related ailments, I found myself wondering what the late Studs Terkel would have said about our collective hopeover. He surely would have urged us not to give in to despair. I reached for one of his last books, Hope Dies Last. I didn’t have to read long. The book opens with the words: “Hope has never trickled down. It has always sprung up.”

And that pretty much says it all. Hope was a fine slogan when rooting for a long-shot presidential candidate. But as a posture toward the president of the most powerful nation on earth, it is dangerously deferential. The task as we move forward (as Obama likes to say) is not to abandon hope but to find more appropriate homes for it-in the factories, neighborhoods and schools where tactics like sit-ins, squats and occupations are seeing a resurgence.

Political scientist Sam Gindin wrote recently that the labor movement can do more than protect the status quo. It can demand, for instance, that shuttered auto plants be converted into green-future factories, capable of producing mass-transit vehicles and technology for a renewable energy system. “Being realistic means taking hope out of speeches,” he wrote, “and putting it in the hands of workers.”

Which brings me to the final entry in the lexicon.

Hoperoots. Sample sentence: “It’s time to stop waiting for hope to be handed down, and start pushing it up, from the hoperoots.”

[Naomi Klein is an award-winning journalist and syndicated columnist and the author of the international and New York Times bestseller The Shock Doctrine: The Rise of Disaster Capitalism, now out in paperback. Her earlier books include the international best-seller, No Logo: Taking Aim at the Brand Bullies; and the collection Fences and Windows: Dispatches from the Front Lines of the Globalization Debate (2002). To read all her latest writing visit www.naomiklein.org.]