Uri Avnery and David McReynolds carried on the tradition of the great Eugene V. Debs. 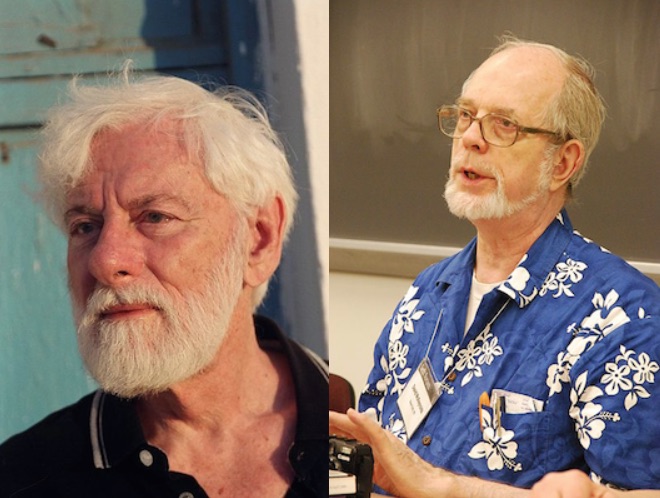 Within just a few days, 94-year-old Uri Avnery and 88-year-old David McReynolds died. I am not sure they ever met, although they had toiled so long, led or took part in so many peace movements with the same species of war hawk enemies, the two can be seen as twin souls in the struggles against the worst tendencies of our time.

Readers interested in the details of their backgrounds, where they lived, who they partnered with romantically, and so on, can find this information easily enough on the web.

Avnery, born in Europe, found himself in the Irgun military in the founding war of Israel, and regretted the acts that the new Israelis committed against Palestinian civilians all the rest of his long life. A confirmed leftist in a country that excluded a fifth of its population from real citizenship and moved steadily toward the Right from at least 1967 onward, he could not succeed.

But he did not fail. He published views despised by the mainstream politicians of all parties (leaving aside the “Arab” parties and the descendant party to the Communists), he met secretly with Arab counterparts, including Arafat, and near the end of his life, posted commentary several times per week.

His mini-essays were lucid and widely read, perhaps most of all by the young people of the Israeli Resistance. After he died, West Bank settlers plotted to destroy his ashes before they could be buried — perhaps the greatest tribute of all.

David McReynolds was as deeply American as Uri Avnery was Israeli.

McReynolds was as deeply American as Avnery was Israeli (a designation which, he insisted, belonged as much to non-Jewish inhabitants of the state). In an unpublished essay, he related how he became a sort of Beat or pre-hippie kind of radical, gay within a resurgent, 1950s pacifist movement led often enough by Catholic Worker activists.

McReynolds was also a socialist, part of the little group of Socialist Party members who survived the Cold War and experienced a blip of popularity, at least in a few cities, during the dark 1950s. An aging Norman Thomas and a young Michael Harrington found themselves, at the socialist helm in the early 1960s, encouraged by the Civil Rights and peace movements, but also invaded by a rancorous crew of former Trotskyists moving swiftly rightward.

A staff member and effective leader of the War Resisters League, McReynolds naturally allied himself with the group around Liberation magazine, early and militantly against the U.S. invasion of Vietnam. Very much like Uri Avnery watching former liberal-socialist allies become ruthless land-grabbers in the West Bank, McReynolds saw the liberals and some prominent socialists rabidly eager to see the Vietnamese resistance destroyed by every brutal means available.

Indeed, within a few years, the land-grabbers and rightward turning socialists of America became intimate global partners — the moving figures of neoliberalism and neoconservatism — with Avnery and McReynolds resisting every step of the way. Perhaps the most bitter pill to swallow was the eagerness of the Israeli Labor Party and the leadership of the AFL-CIO to join in the bloody fun.

McReynolds chose to stay in the small and insular Socialist Party, running for offices (including the president) in order to publicize his point of view. Avnery, who had been in the Knesset but quit to do more good outside, would have sympathized.

To the end of their lives they remained real public figures, resolute in their views.

To the end of their lives they remained real public figures, resolute in their views. Notably, they both insisted that the familiar combination of domestic reforms and hard-line foreign policies was no more than a monstrous fraud.

It can be no surprise that prominent Israeli intellectuals, tipping their hat to a leading dissident, sneer at the young people who faithfully follow his vision. Most likely, vaguely social democratic American liberals who favor a “forward” foreign policy (said to be the Clinton doctrine) of overthrowing unfriendly regimes through a combination of money, words, and bombs, will offer McReynolds their own versions of backhanded tributes.

Let us remember Uri Avery and David McReynolds as the uncompromised champions of peace that they were in life. Speaking for myself, I see Eugene V. Debs in them, and that is the highest tribute that I can make.

[Left historian, popular cultural critic, and radical comics publisher Paul Buhle, a former senior lecturer at Brown University, was active in the civil rights movement and worked with SDS in the Sixties. He was founding editor of the influential journal, Radical America (1967-1999) and his Radical America Komiks, produced in collaboration with underground comix pioneer Gilbert Shelton of Austin, helped introduce the radical new medium to the American Left.]