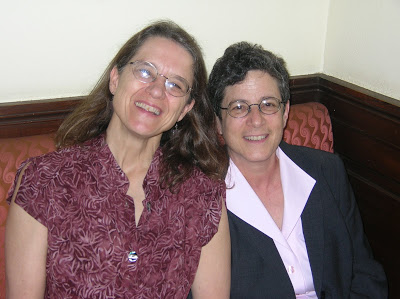 Gail and Betsy Leondar-Wright, who have been together since 1991, were among the first same-sex couples to be legally married in the United States — on May 23, 2004, in Arlington, Massachusetts, the week the state made same-sex marriage legal.


On the show, we discuss their marriage, the gay marriage and LGBT movements in America, and the larger issues of class and progressive social change to which they are both committed.

Gail Leondar-Wright is the founder of gail leondar public relations, which promotes progressive books. She has publicized over 600 titles on sustainability, peace, economic justice, and human rights.

Betsy Leondar-Wright, an economic justice activist, is the Project Director for the nonprofit organization, Class Action. She is the author of Class Matters: Cross-Class Alliance Building for Middle-Class Activists and the co-author of The Color of Wealth: The Story Behind the U.S. Racial Wealth Divide. She holds a PhD in sociology from Boston College.

Hosted and produced by Rag Blog editor and long-time alternative journalist Thorne Dreyer, a pioneer of the Sixties underground press movement, Rag Radio is broadcast every Friday from 2-3 p.m. (CST) on KOOP, 91.7-fM in Austin, and is rebroadcast on Sundays at 10 a.m. (EST) on WFTE, 90.3-FM in Mt. Cobb, PA, and 105.7-FM in Scranton, PA.