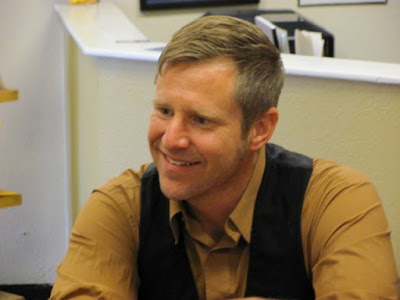 See performance videos from the show, Below.

You can listen to Guy Forsyth on Rag Radio, here.


On the show, Guy Forsyth discusses his fascinating and eclectic career as well as issues like the spiritual nature of music and the social role of the musician, and the difficult economics for musicians in the Internet age — and in the massive Austin music scene today. And he performs four songs live, accompanied by the other members of his trio, Jeff Botta and Nina Botta (see video below).

Rag Radio features hour-long in-depth interviews and discussion about issues of progressive politics, culture, and history. The syndicated show is produced in the studios of KOOP-FM, Austin’s cooperatively-run all-volunteer community radio station. It is broadcast live on KOOP Fridays from 2-3 p.m. (CST) — and streamed live on the Internet — and is rebroadcast on WFTE-FM in Mt. Cobb and Scranton, PA.

Guy Forsyth has been a part of the Austin music scene for 20 years and has won numerous Austin Music Awards, including “best male vocalist” in 2005. The master of an array of instruments, including acoustic, electric, and slide guitar, harmonica, ukulele, and singing saw, Guy has been noted for his “gripping, powerful vocals that deliver energetic yarns about love, the government and the apocalypse.”

Guy Forsyth performs with his trio on Rag Radio, Friday, November 16. Video by William Michael Hanks / The Rag Blog.
Texas Music Magazine wrote about Forsyth: “The insanely talented multi-instrumentalist can put on one hell of a show, alternately dazzling and amusing audiences on a musical journey that ventures from ragtime jazz and Delta blues to socially conscious folk and rollicking modern rock.”

Forsyth, who founded the raucous, irreverent, and highly theatrical Asylum Street Spankers in Austin in 1994, started out as a comic stuntman at Renaissance festivals and as a street busker in New Orleans. He regularly tours in the United States and Europe, and has opened for and shared the stage with musicians such as BB King, Ray Charles, Lucinda Williams, Jimmy Vaughn, Dr. John, and Robert Cray.

Rag Radio has aired since September 2009 on KOOP 91.7-FM in Austin. Hosted and produced by Rag Blog editor and long-time alternative journalist Thorne Dreyer, a pioneer of the Sixties underground press movement, Rag Radio is broadcast every Friday from 2-3 p.m. (CDT) on KOOP, 91.7-FM in Austin, and is rebroadcast on Sundays at 10 a.m. (EDT) on WFTE, 90.3-FM in Mt. Cobb, PA, and 105.7-FM in Scranton, PA.