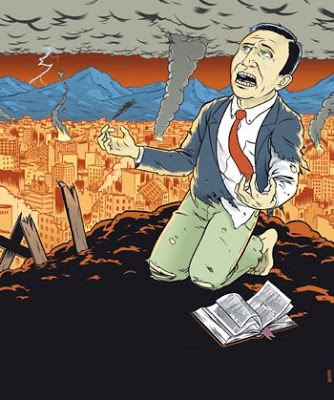 America’s religious Right has conceded that the election of US President Barack Obama has sealed its defeat in the cultural war with permissiveness and secularism.

WASHINGTON — Leading evangelicals have admitted that their association with George W. Bush has not only hurt the cause of social conservatives but contributed to the failure of the key objectives of their 30-year struggle.

James Dobson, 72, who resigned recently as head of Focus on the Family — one of the largest Christian groups in the country — and once denounced the Harry Potter books as witchcraft, acknowledged the dramatic reverse for the religious Right in a farewell speech to staff.

“We tried to defend the unborn child, the dignity of the family, but it was a holding action,” he said.

“We are awash in evil and the battle is still to be waged. We are right now in the most discouraging period of that long conflict. Humanly speaking, we can say we have lost all those battles.”

Despite changing the political agenda for a generation, and helping push the Republicans to the Right, evangelicals have won only minor victories in limiting the availability of abortion. Meanwhile the number of states permitting civil partnerships between homosexuals is rising, and the campaign to restore prayer to schools after 40 years — a decision that helped create the Moral Majority — has got nowhere.

Though the struggle will go on, the confession of Mr Dobson, who started his ministry from scratch in 1977, came amid growing concern that church attendance in the United States is heading the way of Britain, where no more than ten per cent worship every week.

Unease is rising that a nation founded — in the view of evangelicals — purely as a Christian country will soon, like northern Europe, become “post-Christian”.

Recent surveys have suggested that the American religious landscape has shifted significantly. A study by Trinity College in Connecticut found that 11 per cent fewer Americans identify themselves as Christian than 20 years ago. Those stating no religious affiliation or declaring themselves agnostic has risen from 8.2 per cent in 1990 to 15 per cent in 2008.

Despite a common distaste among evangelicals for the new Democratic president, who is regarded as at best a die-hard, pro-abortion liberal and at worst a Marxist, a serious rift is emerging among social conservatives in the wake of his election victory.

A growing legion of disenchanted grassroots believers does not blame liberal opponents for the decline in faith or the failures of the religious Right. Rather, they hold responsible Republicans — particularly Mr Bush — and groups like Focus on the Family that have worked with the party, for courting Christian voters only to betray promises of pursuing the conservative agenda once in office.

“Conservatives became so obsessed with the political process we have forgotten the gospel,” said Steve Deace, an evangelical radio talk show host in Iowa who broadcast a recording of Mr Dobson’s address, which he said had appeared on Focus on the Family’s website before disappearing.

Mr Deace added: “All that time spent trying to sit at the top table is not time well spent. Republicans say one thing and do another.”

In the southern Bible belt, many like the Rev Joe Morecraft, head of a small Presbyterian church near Atlanta, judge that the Christian movement failed not because its views were unpalatable for moderates and liberals, but because “it was not Christian enough”.

A deserter from the Republican Party, he said Christians had been corrupted by politics and needed to return to the basics of local social work and preaching the gospel, rather than devoting their “energies to getting a few people elected”.

He is not alone in questioning how evangelical leaders such as Mr Dobson could spend a career campaigning against abortion and then eventually support a candidate like Senator John McCain, who has dubious “pro-life” credentials.

Ray Moore, president of Exodus Mandate, a South Carolina-based group which organises home-schooling for Christian children, said: “Political involvement by Christians is not wrong, but that’s all the big groups did for 25 years. They were more concerned with fund-raising and political power than they were with our children’s welfare.”

“It’s a failed movement,” he said. “We will end up like England, where the church has utterly lost its way.”

Michael Spencer, a writer who lives in a Christian community in Kentucky, said the religious Right had suffered from its identification with Mr Bush, the most unpopular president in living memory, and the extremist rhetoric of some on the religious Right.

One of the more notorious outbursts was the Rev John Hagee’s assertion that the deadly Hurricane Katrina in 2005 was God’s judgment on New Orleans for hosting a gay parade.

In an online article in the Christian Science Monitor that has became a touchstone for disaffected conservatives, Mr Spencer forecast a major collapse in evangelical Christianity within ten years.

“Evangelicals have identified their movement with the culture war and political conservatism. This will prove to be a very costly mistake,” he wrote.