Remembering Tom Bernard : The GI Movement Against the War in Vietnam 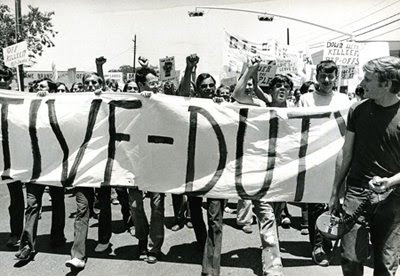 ‘One of the most thrilling aspects of the GI Movement during the Vietnam War was its ubiquitous nature. In every corner of the military, everywhere on the planet, GIs found creative, stunning ways to rebel.’
By David Zeiger / The Rag Blog / January 5, 2009

[David Zeiger produced and directed the award winning and critically praised documentary film Sir! No Sir! about the GI movement to end the War in Vietnam.]

It is with deep, deep sadness that I am writing to tell you of the death of Tom Bernard. Tom suffered a massive heart attack on Sunday, December 27. He was 60 years old.

I met Tom while filming Sir! No Sir! in what I later learned was a typical “Tom” way. I’ll never forget the email I got out of the blue from this guy I had never heard of, telling me simply that he had been part of an extremely significant group that had to be part of this film. They had never told their story publicly, and in fact had been threatened with prosecution for treason if they ever did. I was certainly intrigued, and soon Tom and I were friends.

Several months and a couple of failed attempts later, I found myself in a house with Tom and three other courageous, exemplary members of the WORMS — We Openly Resist Military Stupidity.

One of the most thrilling aspects of the GI Movement during the Vietnam War was its ubiquitous nature. In every corner of the military, everywhere on the planet, GIs found creative, stunning ways to rebel. Even if no one outside their individual unit knew they existed, they became part of an elegant tapestry of chaos and resistance.

And none were more elegant than the WORMS. Trained in Vietnamese, they were part of an ultra-secret unit that flew over North Vietnam intercepting communications from the “enemy,” and translating them for the Pentagon to use in planning military strategy. As Tom described it to me, they began developing an almost personal relationship with the voices they were hearing, and soon knew that the real “enemy” was not the people they were listening to, but their own bosses. Knowing firsthand how civilian centers were targeted and hospitals were being bombed, they decided to dedicate their lives toward ending that criminal war.

As they told me their story, the depth of their humanity and courage shown through — and I knew Tom had not exaggerated their significance. Finding themselves in a critical position for the war effort, they developed creative, challenging, fun (that was a requirement!), and profoundly effective ways of resisting. Their impact was far greater than they or anyone else knew.

I don’t know much about Tom’s life after Vietnam, but I do know that — as is true for thousands — those years as a GI resister informed all of it. I know that he never gave up his determination to change the world and his sense of purpose that was born with the WORMS.

My heart goes out to his wonderful wife, Helen, and their family. I will never forget Tom, and am very grateful to have known him the brief time I did.