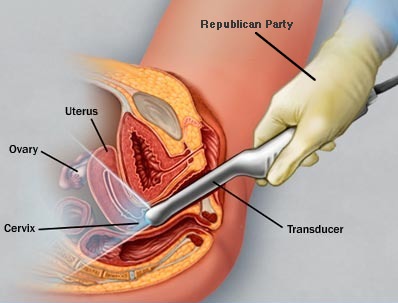 The GOP’s uterus inspection device. Image from Little Green Footballs.
Vaginal penetration in Virginia:
Just lie back and enjoy it

Today, it will be tough to beat the Virginia legislature, although I would very much like to, preferably with a baseball bat. The “conservative” Republicans who dominate it have finally exposed their innermost feelings. They want to get government off their backs — and into women’s vaginas.

By an overwhelming number, and including women, they have passed legislation requiring any woman seeking an abortion to submit to an ultrasound procedure in which she is vaginally penetrated.

The Governor, Bob McDonnell, who is hoping for a spot as Romney’s running mate, said that he will sign the bill.

I don’t know why we’re fighting the Taliban in Afghanistan when they’re busy at work right here in this country.

Consider this comment from legislator C. Todd Gilbert: “In the vast majority of these cases, these (abortions) are matters of lifestyle convenience.”

Democrat David Englin, who opposed the bill, said a Republican lawmaker told him that women had “already made the decision to be vaginally penetrated when they got pregnant.”

In other words, once a woman has decided to have sexual intercourse in Virginia, she has consented to being raped by the state. Of course, once she has consented, it’s not actually rape. Maybe it’s a matter of “lifestyle convenience.”

To be fair about it, there are at least a couple of Republicans who do not grope their aides, sexually harass constituents, or rape interns in the back seat of their taxpayer-paid automobiles out behind the local 7-Eleven — these would be the Republican women.

Astonishingly, one Kathy J. Byron, a sponsor of the bill, actually said, “if we want to talk about invasiveness, there’s nothing more invasive than the procedure she’s about to have.”

Presumably, Byron sees little difference between one sort of penetration and another. Maybe she’d like to try that logic on her male colleagues who, once having had their prostates probed by their physician, may be said to have consented to being sodomized by the Governor.

Bet that video on YouTube would go viral in 50 seconds.