Robert Pardun : In Support of Barack 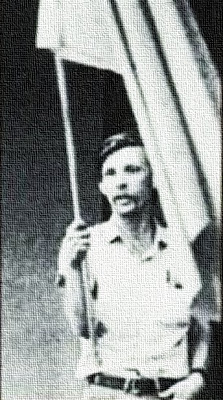 Robert Pardun, back in the day.

And the words that are used for to get the ship confused will not be understood as they are spoken…
And like Pharaoh’s tribe they’ll be drowned in the tide and like Goliath they’ll be conquered.

Money doesn’t talk it swears. Propaganda all is phony

[Robert Pardun — an activist in Austin in the sixties and a contributor to the underground paper, The Rag — was a national officer of Students for a Democratic Society (SDS). He is the author of Prairie Radical : A Journey Through the Sixties. Robert now lives in the mountains near Santa Cruz, California.]

This is to express my solidarity with those of us out there working for the election of Barack Obama. I have seen many election cycles come and go and in general what we learned during the sixties is still true today—those with money use government for their own private ends. The Bush Administration has been the most blatant I can remember in taking from the poor and giving to the rich. One has only to look at the war in Afghanistan and Iraq to see this. With the money spent to occupy and then militarily control those two countries we could have rebuilt every school, every bridge, and every road in the United States. In addition we could have universal health care for everyone and funded research in alternative energy sources. In the movie “The Graduate” Dustin Hoffman is told that the wave of the future was in plastics. Today it is in batteries.

About ten years ago I read about a survey of attitudes of the American people concerning work, war, family and the like. The conclusion was that there is within America a sizable contingent of people who maintain the attitudes of the counterculture of the 1960s and 70s. These people make up a substantial part of Obama’s support and many are actively involved in his campaign. These are people who send in the checks for fifteen or twenty dollars and who sit behind card tables at the local grocery store encouraging people to vote. They are us and a new generation that learned from us.

During the sixties we wondered why defacto slavery still existed in parts of the South even though the Civil War had been fought a hundred years before. Culture changes slowly as new ideas become commonly accepted. Obama represents the ideals of the sixties even though he wasn’t there, and the younger generations like Obama because he represents a different way of looking at the world.

Is Obama a revolutionary? Hardly! If he was you would never have heard of him. Besides we are not in a revolutionary period. But he does stand for a more open government and that is important. We have a much better chance of getting the draconian drug laws changed with Obama. The drug war is known to have been a campaign gimmick of Nixon targeted at the black liberation movement and the anti-war movement. We should concentrate on repealing those laws. We used to say that we needed to work to stop the seventh war from now. Well we’ve already passed that point but with a President who is willing to think about alternatives we stand a chance of stopping the automatic reflex of attacking what we don’t like first and talking about it later. In addition we must change the way the government treats the people it “puts in harm’s way.” The treatment of veterans is absolutely scandalous and must be changed.

This election is the third in my lifetime in which I thought the democratic candidate might actually make a difference. After wondering why anyone would say that he smoked marijuana but didn’t inhale I voted for Clinton. With Obama we stand a change of actually changing things for the benefit of the people. Instead of taking the people’s money and using it to benefit the military-industrial complex we could actually use it to better the condition of the people who work hard to keep body and soul together.

4 Responses to Robert Pardun : In Support of Barack