Keep Your State Out of My Church… 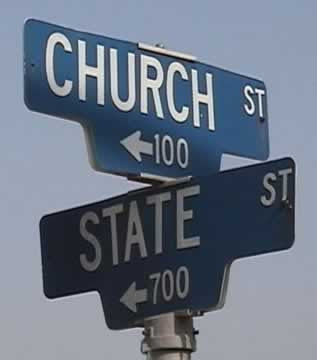 Obama, Keep Your Hands Off My Faith-Based Initiative
by Jim Moss / July 6, 2008

[Jim Moss is a Presbyterian minister from York, South Carolina. He publishes a blog and a quarterly newsletter called “Discipline for Justice,” which focuses on ways North Americans can live lives that promote peace and economic justice.]

Last week, Obama spoke out in favor of expanding Bush’s faith-based initiative program, part of a predictable and consistent move to the center.

“I’m not saying that faith-based groups are an alternative to government or secular non-profits. I’m not saying that they’re somehow better at lifting people up. What I’m saying is that we all have to work together — Christian and Jew, Hindu and Muslim; believer and non-believer alike — to meet the challenges of the 21st Century.”

Naturally, the secular left is not happy about this development. But neither are many on the spiritual left. Speaking as a progressive, as an ordained minister in the Presbyterian Church (USA), and as someone who has successfully organized a church-based food pantry, I have a message for Obama and any other politician who is making the sacred task of outreach ministry a tool of political pandering:

Get your hands off my faith-based initiative! We don’t want any of your government money getting in the way of our work.

It’s a bad idea for a number of reasons:

1) Over-Regulation. The government never just gives you money. There are always rules and regulations, mountains of paperwork, and any number of hoops to jump through – sometimes they make sense, sometimes they don’t. This extra work always seems to stand in the way of doing the real work at hand.

2) The Fickle Nature of Politics. Government funding can get turned on and off like a faucet, depending on the political climate . Entire agencies can get the ax simply because a new administration comes in with different priorities. Charities need to depend on consistent money sources that are not politicized.

3) Strings Attached. There really is no such thing as a free lunch. Government funding equals a government agenda, and the political issues of the day will certainly affect where the funding goes. Instead of the meeting the greatest needs of the people, the money will tend to go where it makes the elected officials look best.

4) Separation of Church and State. This is one area where I agree with atheists. Looking back through history, it’s clear that when government and religion are in cahoots, bad things tend to happen. They need to be a check on one another’s power, and the line between them needs to stay crystal clear. This program blurs that line.

5) A Higher Calling. Feeding the poor, tending the lame, caring for the widow and the orphan. These are some of the most sacred tasks for Christians and for other religions. Using government money to do these tasks is not acceptable. Individuals are called to give of their time and money because giving is a central part of what we believe. It is part of building a community that takes care of one another. Being funded with government money raised through taxation cheapens this noble task. The government certainly has its role in meeting the needs of the people, but this does not come through doing for the faithful what they should be doing themselves.

So thanks, Barack, but no thanks. Our charities are not another pawn in the chess game of this election.

This entry was posted in RagBlog and tagged Charity, Obama, Presidential Campaign, Religion. Bookmark the permalink.