Three more years? That’s pretty scary! Surely there must be a mistake in that headline. 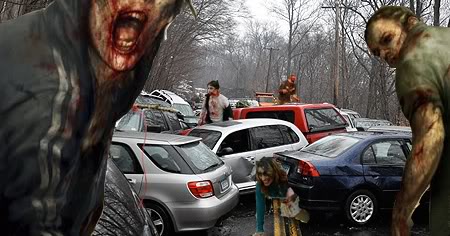 Take me for a ride in your car-car. Image from Luxury4Play.

First in a series

Is it possible that average Americans could have a hard time driving only three years from now? Preposterous, to say the very least! Three more years to drive would be awful scary if it were true. Fortunately, it can’t be true because the USA has been racing ahead, drilling like crazy, with the result that we are now the world’s third biggest oil producer, just behind Russia and Saudi Arabia.

As everyone who follows the news has heard by now, an innovative drilling technology called “fracking” has added about three million barrels a day of new “tight oil” production, from areas of the U.S. like the Bakken in North Dakota, and the Eagle Ford shale in Texas. Obama used to tell us how we need to break our petroleum addiction, but now he can’t bless new drilling enough.  As a result, Americans are feeling better and driving more.

The problem in a nutshell

This article will review the major problem the USA faces and the basic reasons why average American middle class folks can’t keep driving the way they have been accustomed to thinking is their birthright for almost the past century.

This first part begins a series that is partly concerned with geology, partly with the economics of energy, and partly with how the powers of self-interest and denial have blinded Americans to the precarious future of our national fossil fuel addiction.

The economic and geological evidence strongly suggests that the widely acclaimed new “fracking” technology may have bought us a few more years of grace in being able to keep on driving, but that this is about to end. With the end of cheap energy, and cheap oil in particular, the whole world is now facing an end to several centuries of rapid growth based on burning fossil fuels, as we progressed from burning wood to coal, and finally to oil and natural gas. The end of cheap oil means that the USA must now learn to accept a painful new transportation reality.

It all has to do with a peak in world oil production, about which I have written in the past.  Shell geologist M. King Hubbert famously predicted in 1956 that U.S. oil production would peak about 1970, which it did, and then globally about 2000. As it happened, he was only off by about five years. Production of conventional oil — meaning cheap traditional oil — peaked globally in 2005.

Now the world is only able to expand global liquid fuel production by producing various costlier unconventional fuels. We are still mostly able to drive largely because of a big increase in unconventional oil production from sources such as the Canadian tar sands, heavy oil production, and deep water drilling. Especially in the last five years, the widespread use of “fracking,” or the hydrofracturing of petroleum source rock, has been used to yield “tight oil,” as well as natural gas.

Fracking has already added U.S. production of about 3 million barrels per day of expensive, low quality tight “oil,” and this addition is still increasing. This  has been enough to allow most people to keep driving for now, although at a much higher fuel cost than people were used to paying a decade ago. In the last decade oil prices have roughly tripled. Only the recent tight oil from U.S. fracking has kept total world liquid fuel production rising.

The important new information to report is that we can now see the timing of a peak in global oil production much more clearly than even five years ago. Fracking has brought us a little slack in driving, but not much. As we can see, total U.S. driving has been in decline since about 2007, largely due to a rising fuel cost. A decline is total miles driven implies an even sharper decline in per capita driving, as indicated by the red line. 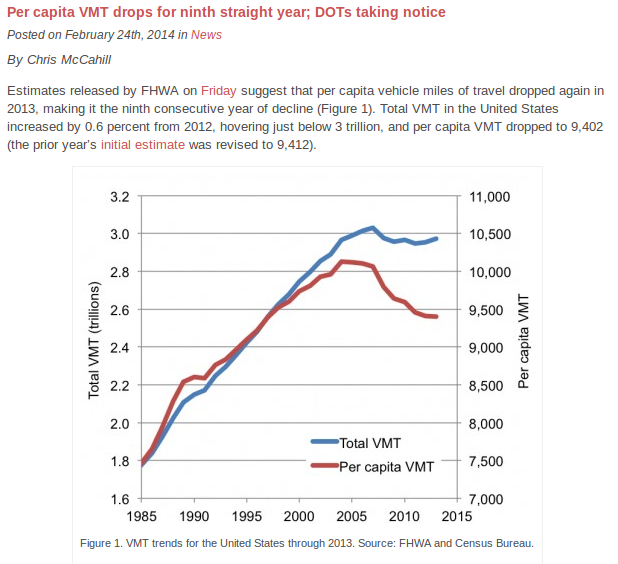 Fracking production has temporarily held down driving costs, and has thus bought us a few more years of energy crisis denial; for now, driving is expensive but commonly affordable (our global warming denial can still go on for a little longer).

However, driving as usual will probably have to end with the end of the current fracking boom, as soon as its mounting profit losses kill new investment in production. The reason we can’t frack our way out of our oil addiction is that fracking really doesn’t pay off very well. The drilling costs are high compared to conventional oil production, since fracking involves a lot of lateral drilling, plus the great additional energy expense of breaking up a lot of underground rock using high pressure water.

You can produce oil at about $100 a barrel this way, but this tight oil commonly contains a lot of volatile but less valuable condensates like butane. Fracking wells also tend to mostly deplete in just a few years, much faster than old-fashioned conventional oil wells. Although the best fracking wells can still be profitable, the most profitable parts of the major U.S. fracking fields have already been drilled and produced since the low hanging fruit always gets picked first.

Today most energy companies are actually losing money on their oil and gas production.

Today most energy companies are actually losing money on their oil and gas production. This lack of profit, even at the current high price of $100 per barrel, is the way that the world of energy investment tells us that we are reaching peak oil. Peak oil is not exactly geological, although geology has a whole lot to do with it. Peak oil is actually reached when people can no longer afford what it costs to to produce it.

The official U.S. Energy Information Administration recently released a chart which shows that the top 127 oil and gas companies are currently losing money. 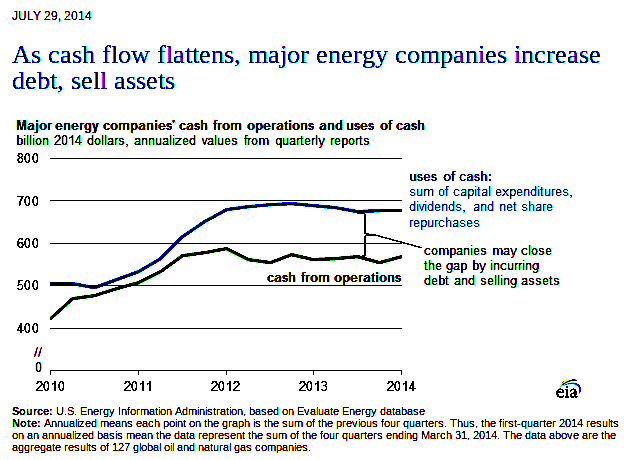 Chart from U.S. Dept. of Energy.
CLICK ON IMAGE TO ENLARGE.

The gap between the cost of producing oil and what our depressed global economy can bear is currently estimated to be about $10 a barrel in losses. This in itself is unsustainable but Gail Tverberg, a very perceptive non-governmental energy analyst, predicts that that this loss on new oil production will widen very rapidly to about $50 per barrel in only a few years, see Fig. 13 at this link.

When the profit on new oil production disappears, the slow depletion of the giant existing fields takes over. The world’s reserves of cheap conventional oil, largely still in the Middle East, are still profitable, but these massive reserves are in slow decline. Russia recently announced that its production has peaked and even the Saudis are suspected to have run out of spare production capacity.

Most people probably think that OPEC must be getting rich on its oil, but the reality is that “Oil prices are now too low for most OPEC countries to cover their spending needs.” Peak oil is sneaky because it has the hidden effect of slowly impoverishing oil customers by inhibiting economic growth in addition to directly raising fuel costs.

We have already reached the point that the average cost to drill for oil is more than our world of oil-starved and economically struggling customers can afford to pay. This is particularly the case when this increasingly costly fuel is used to power gas guzzlers that many people in the USA use to drive to work while earning minimum wage.

We have already seen the price of oil spike to $147 dollars a barrel in 2008, followed by a price collapse that brought the price back down to the low forties a barrel, at least briefly in 2009. This extreme price volatility is by itself enough to scare away a lot of new drilling investment. Once you drill and frack a tight oil well, you must find a market for this expensive oil, even though the price might go down because of a weak economy. Now that most oil companies are losing money, even at $100 a barrel (at this time, global benchmark Brent is trading below $100), we can’t expect this production to increase.

No matter how the relative value of the dollar fluctuates, the amount of oil-based fuel that it can buy will almost certainly have to decrease as a trend.

No matter how the relative value of the dollar fluctuates, the amount of oil-based fuel that it can buy will almost certainly have to decrease as a trend, or perhaps more abruptly due to economic pressure that can be attributed to costly fuel. We are in a real bind when the global economy can’t recover without cheap oil, when at the same time the oil that global trade relies on for its recovery is no longer profitable to produce.

Looking ahead, oil is much more valuable as a feedstock for making petrochemicals than it is for powering inefficient cars. This means that the petrochemical industry will still be bidding a high price for the world’s last oil, long after our gasoline-powered cars go the way of the horse and buggy.

In Part 2 of “Three More Years of driving” we will further explore these same energy resource constraints, and will look at the role of finance capital, the Koch brothers, etc, in perpetuating our denial, which denial inhibits energy reform until there is a full blown crisis.