Ron Jacobs :
Betty Medsger’s ‘The Burglary’ is extraordinary tale of historic ‘B and E’

In 1971, eight anti-war activists broke into the FBI field office in Media, Pennsylvania, and removed confidential files about FBI surveillance against political organizations it considered anti-American. 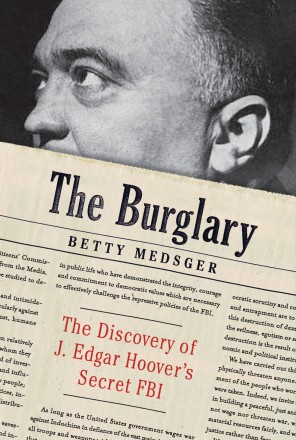 ‘The Burglary’ tells tale of historic ‘B and E.’

The story told in Betty Medsger’s new book The Burglary: The Discovery of J. Edgar Hoover’s Secret FBI is a tale of a government drunk on its own power, some citizens determined to end the binge, and a time when heroes were not only made in sporting venues and the movies.

It is about people putting their lives on the line in opposition to an encroaching police state and the men determined to imprison those people for their opposition.

On March 8, 1971, a group of eight anti-war activists broke into the FBI field office in Media, Pennsylvania, and removed every confidential file they found there. They then transported the files to a remote farmhouse where they proceeded to read through the files, sort, package, and mail them to reporters and legislators.

The intent of the burglars was to expose the police state surveillance practiced by the FBI against political organizations it considered anti-American. Almost all of the surveillance targets were left, anti-war, anti-racist, Black nationalist, or some combination of the above.

Once the burglary was discovered, J. Edgar Hoover, the authoritarian and autocratic director of the FBI, went into combat mode, directing hundreds of agents to stop their present activities and find the burglars before they leaked the documents.

The good news is that Hoover’s manhunt failed, completely. The burglars were never found and the materials were released to the press. Many citizens and legislators were appalled at the record of the violation of rights and civil liberties detailed in the documents. Others praised the director for his vigilance.

President Richard Nixon, who had had his own megalomaniacal plans for greater surveillance capabilities dashed by Hoover only months earlier, spoke out against the burglary and in favor of the FBI. As more documents were made public, it became apparent that not only were peoples’ rights violated, many individuals had been the target of explicitly illegal acts committed by agents in the name of national security.

One of the journalists who received documents from the burglars was Betty Medsger, who was working for The Washington Post at the time.

One of the journalists who received documents from the burglars was Betty Medsger, who was working for The Washington Post at the time. Once the ethical dilemma of using stolen documents was resolved by Medsger and her supervisors, Post publisher Katherine Graham and editor Ben Bradlee, she wrote a series of stories that shook the intelligence and law enforcement world. Other news organizations followed suit.

Not satisfied with the stories she wrote back then, Medsger decided to one day write the entire narrative of the burglary, the burglars, and the effect their action had on the U.S. government. Her recently released book is the result of that endeavor. It is wonderfully told, meticulously researched and detailed, and much, much more than a recitation of facts.

Medsger opens the book by introducing the burglars, describing their upbringings, work and history in the anti-war and anti-racist movement. Concurrently, she details the burglar’s preparations for the action. Entwined and organic to these descriptions is Medsger’s discussion of the political and social climate in the United States in the late 1960s and early 1970s. Then she gives what could almost be considered a play-by-play of the burglary itself. 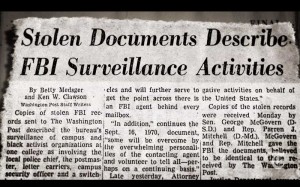 I recall the moment I first read about the Media burglary. As I read the brief article in the Stars & Stripes mentioning a burglary of an FBI office near Philadelphia, my heart jumped for joy. Finally, I thought, someone got something on the bastards. Friends of mine in a Jesuit community in Frankfurt am Main, Bundesrepublik Deutshland, where I lived had been keeping me in the loop about radical Catholic activities ever since we discovered our similar politics.

The Jesuits’ concern had been ramped up after the Feds had charged the Berrigan brothers — radical Catholic priests Daniel and Philip — and several others with conspiring to kidnap Henry Kissinger (certainly a deserving candidate for such an act).

The last time we had spoken to each other, one of the Jesuits (who was friends with a couple of the people charged) had said he might leave the relative comfort of the Frankfurt seminary and go back to the States in order to be back on the front lines. I looked forward to his response to the news from Media.

The Burglary summarizes the content of the stolen files and discusses their meaning and the reaction to their content. The immediate reaction included calls by editorial writers for more transparency and a congressional inquiry. The longer-term response involved congressional inquiries and some reform-minded moves inside the FBI. The congressional inquiry uncovered government actions (especially under the operation known as COINTELPRO) even more illegal and abusive. However, the reforms suggested by Congress went nowhere.

In a nation like the United States that worships the law, the lesson learned by the exposure of the FBI’s lawlessness was simply to change the law, making legal that which was once illegal. As Medsger points out, even those excesses that remained illegal were ignored when the FBI considered it necessary to ignore them.

The FBI’s defiance of federal laws curtailing its power is especially important today as members of the public call for laws curtailing or ending the massive surveillance operation by the NSA. If the FBI ignored laws passed by Congress, what’s to stop the National Security Agency from doing the same?

If that precedent is not enough to convince the optimistic opposition that the government will defy those laws it can’t change, perhaps the secret illegal apparatus set up by the Reagan White House to fund the illegal mercenary army known as the contras is. The message this history is relating is simple: the U.S. government does not care what the public thinks. It has an agenda designed to maintain and enhance its own power and the power of those elites it represents and works for.

Some officials are certainly more arrogant in their pursuit of this agenda, but all of them will participate in it.

There’s an adage that says the more things change, the more they stay the same. As the files released by the Media burglars and Medsger’s discussion of their content in her 2014 book makes clear, this is especially true in regards to the practices of government agencies set up to spy on their fellow humans.

The release of classified files by Chelsea Manning, Wikileaks, and Edward Snowden detailing government surveillance and other misdeeds verifies this in a very real and tangible manner. The Burglary is an important read for this reason alone. The manner in which Medsger weaves her story makes it an enjoyable one, too. Like Manning and Snowden, the Media burglars are owed our eternal gratitude.