‘The City is Ours’ examines both politically and socially the squatters’ movement in Europe over the past 40 years and provides a template for the movement’s future. 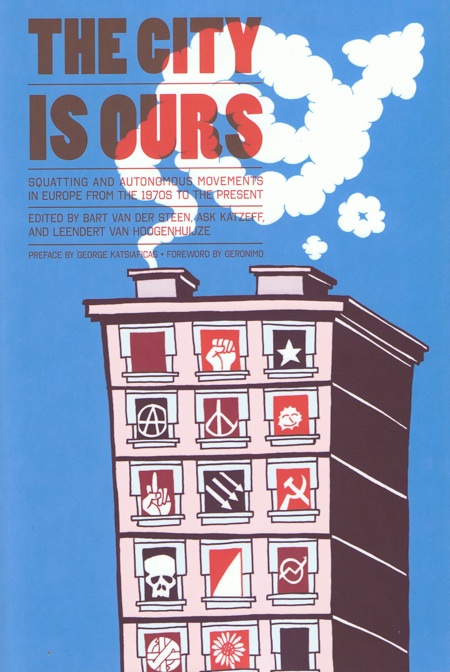 Essays on the squatters’ movement in Europe.

[The City is Ours: Squatting and Autonomous Movements in Europe from the 1970s to the Present, edited by Bart van der Steen, Ask Katzeff, and Leendert van Hoogenhuijze (September 2014: PM Press); Paperback; 336 pp; $21.95.]

British novelist Doris Lessing wrote a novel titled The Good Terrorist. The story revolves around an autonomous leftist cell in London that decides to step up their participation in the struggle against capitalism and imperialism by providing material support to the IRA. Eventually, the cell moves on to taking their own armed actions, which result in the death of one of their members.

The main character in the novel, a woman named Alice, has political and moral disagreements with the course she and her comrades have taken but remains committed to the course of action. The cell’s living quarters is in a squatted building in London. Unlike her fellow squatters, Alice takes an active interest in making the squat a livable quarters. Lessing’s descriptions of the squat and the work undertaken to make it livable are why I mention this work of fiction.

Squatting is at least as old as the Digger movement of the sixteenth century. It is a direct response to the practice of private land ownership and a philosophical and practical challenge to the very concept.

Journalist Robert Neuwirth (author of Shadow Cities: Seven Million Squatters) estimates that there are currently seven million squatters worldwide. This estimate includes those who live in self-constructed shanty towns on the outskirts of cities around the world (especially in Africa, Asia and Latin America), those who squat abandoned buildings in cities and suburbs of the North in small groups or as individuals, and those who organize collectively and squat unoccupied properties because they need a place to live but also as a way to make a political statement about rentier capitalism.

Recently, PM Press published a collection of essays exploring the wave of the latter type of squatting that began in West Germany in the 1970s and continues in some form to this day. The book, titled The City is Ours: Squatting and Autonomous Movements in Europe from the 1970s to the Present, looks at the relationship between the European political phenomenon known as the Autonomous Movement and squatting, the response by the authorities to squatting in different regions, and the nature of the squatting communities themselves.

The essays provide the reader, in varying detail, with histories of squatters’ movements of the past 40 years in cities throughout Europe; from those known for their squatter communities like Berlin and Amsterdam to lesser known squats in Poland and Barcelona. Each chapter deals with a particular city while maintaining a general political perspective best characterized as left libertarian.

Like the squats themselves, some of the essays emphasize the cultural elements championed by the squatters, while others place the political and economic elements front and center. In general, however, what comes across is that the women and men who organized and occupied the squats in this movement believed that one could change the greater world by intentionally changing the nature of their own daily lives to lives that emphasized anti-capitalist and communitarian values.

As documented in several places and mentioned in the beginning of this text, the first squats in this movement were in Frankfurt am Main in what was then West Germany. The occupied buildings were located in the Westend district of the city and included various apartment buildings and estates, some of which were intentionally abandoned so that their owners could sell them to banks and other speculators for office development.

As a teenager living in Frankfurt in the early 1970s, I occasionally found myself at one of these squats with a friend to score hashish or to attend a political or musical performance at the social centers set up in the collective. Although I never spent much more than a couple hours at a time there, the sense of social revolution present stayed with me for days afterwards. When it came time to defend the community from police attacks, I did what I could as a supporter short of getting busted.

Like Berkeley’s Peoples Park or the various Occupy encampments in 2011, the squats were liberated turf, representing another possible world that challenged the domination of the profit motive and demanded one put something on the line to defend them.

This spirit of resistance comes through in this book. Although this reader finished the text wishing there was more detail, more personal narrative, The City is Ours sets out to examine politically and socially the squatters’ movement in Europe over the past 40 years. It performs this task admirably while simultaneously providing a template for the movement’s future.

Urban studies is a discipline growing in popularity and importance. The need for a book that analyzes the organized squatting phenomenon in the context of this discipline is crucial. Already, too much of the discipline is concerned with the profit seeking element of our world while ignoring those who oppose that element and strive for an alternative. The City is Ours is an excellent introductory counterpoint to that trend.