Patrick Cockburn looks at the non-state forces in the region, who they are backed by, the motives of those backers. and the sectarian desires of the jihadis. 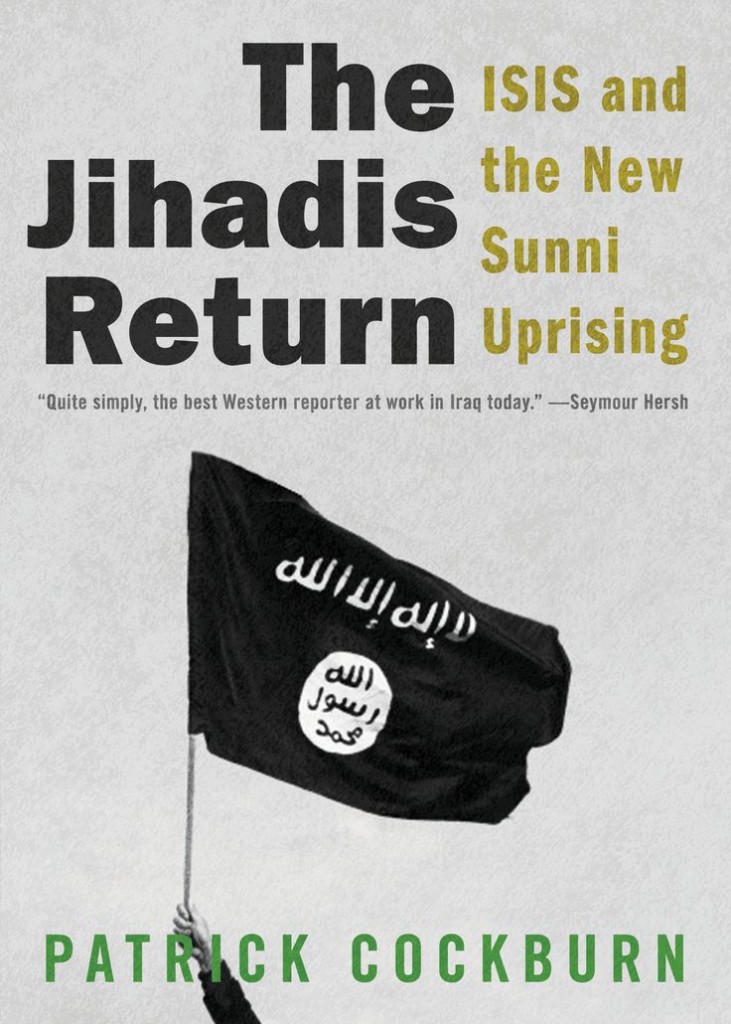 The book addresses the reemergence of Sunni fundamentalist militancy.

The sense of déjà vu in Iraq is not imaginary. With U.S. bombers attacking positions held by Sunni militants and a client Iraqi government apparently unable to fight on its own, the detritus of the U.S. invasion and occupation of Iraq is creating what could end up being the third phase of direct U.S. involvement in at the bloody sinkhole it did plenty to create.

The air strikes and special operations undertaken by the U.S. have a greater likelihood of dragging the U.S. further into this war than they do of furthering a long term solution. The Islamic State (IS or ISIL) fighters are the progeny of Washington’s bloody mischief in the region. They are even using weapons provided by the CIA to rebel forces in Syria, of which IS is but one element. Like Afghanistan’s Taliban in 2003, IS could very likely gain strength once U.S. forces engage its fighters.

Although the differences in strength seem at first glance too great for such a scenario to occur, a friend asked me in an email: “If the Americans bomb ‘IS’ in Iraq could a historical similarity with the U.S. bombing of Cambodia which helped lead to the Khmer Rouge triumph be made?”

While this is certainly a possibility, the Taliban comparison is more accurate. After all, the Taliban are a well-armed minority inside Afghanistan and are often the lead fighters in attacks on occupation forces and other Afghans, but they are not necessarily a popular force in even the sense that the Khmer Rouge were.

Similarly, IS seems to be relatively small in numbers, funded and armed by outside forces including elements in Saudi Arabia and other Sunni regimes, extremely socially reactionary, and is the lead force in the resistance to Baghdad and the U.S.-funded regime there. The Taliban was also funded by elements inside Saudi Arabia’s royalty and by Pakistan’s intelligence apparatus.

Another acquaintance suggested that the goings-on with IS are actually part of a proxy war between the Saudis and Iran and are an overreaction by the Saudis to the nuclear talks between U.S. and Iran. When they financed IS, the forces in the Arab world and the West that did so thought Assad would lose his battle in Syria. However, when that didn’t happen, it was too late. IS had begun to consolidate its power, if only through sheer ruthlessness.

ISIS is not classically fascist, but some of its social policies certainly beg comparison.

ISIS is not classically fascist, but some of its social policies certainly beg comparison. Likewise, some of its tactics certainly bring to mind fascist soldiers. Then again, the same can be said regarding U.S. tactics in its wars and Israel’s in its.

Patrick Cockburn, one of the more honest journalists reporting from the Middle East, addresses these and a multitude of other questions in his soon-to-be-released book, The Jihadis Return: ISIS and the New Sunni Uprising.

Looking at the reemergence of the phenomenon of Sunni fundamentalist militancy Cockburn emphasizes those who fund and support it (various royals in Saudi Arabia, Pakistani intelligence services, and some Qatari royals), their religion (Wahhabism) and its socially reactionary theology, and the refusal of Washington to go after these people putting up the money.

Writing plainly, Cockburn says the U.S. went after the wrong countries when responding to the events of 9-11. Instead of attacking Afghanistan and allowing numerous Bin Laden family members and associates to leave the U.S. after those attacks, the U.S. should have taken a closer look at the connections of those associates and pursued them for their criminal activities related to 9-11.

Nowadays, the extremists of IS are targeting Saudi royals on their websites and videos because those same royals are now attempting to distance themselves from the very groups their money helped create. Apparently, writes Cockburn, the actions of IS are too extreme even for some of their previous supporters.

The imperial desires of the U.S. to remain involved in the Middle East are a consistent part of the context IS and similar extremists exist in. The tendency of the U.S. to label the extremist groups it wishes to help as moderate is also a contributing factor to IS current success. Cockburn writes that by arming these “moderate” groups (in Syria, especially) Washington has created a means for IS to get some of those weapons through the alliances it forms with those groups, either by buying them from corrupt members or through outright theft.

One would think that after a very similar scenario played itself out in Afghanistan under Carter and Reagan — a scenario which resulted in the rise of the Taliban — that Washington would have learned. After all, the reactionary, misogynistic and sectarian mujahedin funded by Carter and Reagan and heralded as freedom fighters were essentially no different than the Taliban in their philosophy and intolerance. Yet, because they opposed the Soviet Union, they became Washington’s allies.

In a tale oft-told, Washington conspired with Riyadh and Pakistan’s ISI to create Al-Qaeda, with arms coming from Washington, military training from Pakistan, and extremist ideology from Saudi Arabia. The rest is history. Other than Washington and Riyadh’s current opponent being Iran instead of the Soviet Union, there is a similarity that runs through the histories of the Afghan mujahedin, the Taliban, Al-Qaida, and IS. Both groups serve(d) as soldiers in a proxy war against Washington and Riyadh’s competition for supremacy in the countries affected.

The Jihadis Return is an important book. Albeit a bit too brief to cover the ever-changing situation in Iraq and Syria, it does provide a fairly comprehensive look at the non-state forces in the region, who they are backed by, the motives of those backers and the sectarian desires of those Cockburn calls jihadis.

The picture that arises from this text is one whose primary characteristic is bloody and uncertain.

The picture that arises from this text is one whose primary characteristic is bloody and uncertain. As Cockburn makes clear, it is also a picture originally drawn by Washington with its support of the current government in Baghdad and now being redrawn by individuals and groups who feel they were left out of the picture.

Their perception holds some truth; Washington’s client regime in Baghdad is seen as a Shia regime, in large part because its leaders have not only ignored Sunni demands for funds and fair treatment, but because it has attacked peaceful protests by Sunnis, locking up the participants and killing dozens.

As the U.S. bombs Iraq more than 20 years after it first did so, one wonders what the next permutation in the century-long attempt by the West to pacify Iraq will look like. If the past 20 years serve any predictive function, the future will only get uglier.

The Jihadis Return by Patrick Cockburn is available exclusively from OR Books.

1 Response to Ron Jacobs :
BOOKS | The pacification that never ends