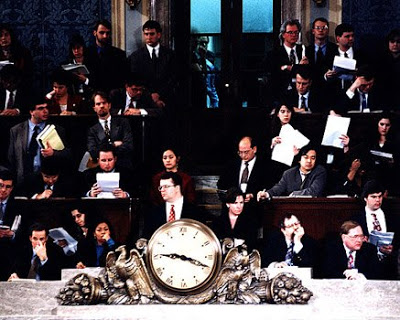 The House of Representatives Press Gallery. Photo: Source.
Capitol Improvement: If nonprofits are supposed to save journalism, why aren’t their reporters allowed into congressional press galleries?
By Megan Tady / June 2, 2009

Many players in the journalism world hope that one short string of letters and numbers can save our crumbling media system: 501(c)(3). And no, it’s not a lottery number.

But this new media savior suffers from a major handicap: An outdated congressional rule bars many nonprofit news organizations from covering Capitol Hill. While reporters working for nonprofit organizations are sometimes granted temporary access to congressional press galleries, the Standing Committee of Correspondents and their executive committees continue to deny permanent credentials to any news organization that isn’t “supported chiefly by advertising and subscriptions.”

What does this mean for nonprofit news organizations? They’re effectively excluded from the D.C. beat. They can’t attend press conferences to ask tough questions, hound congressional staffers, watch floor proceedings, or work from the House and Senate pressrooms while waiting for leaked inside information—you know, the basics of political reporting.

So when the Center for Independent Media, which operates a network of six independent news websites covering both state government and Washington D.C., applied for permanent membership with the Periodical Press Gallery in April, they were denied. The center’s 501(c)(3) nonprofit status was one reason given for the rejection.

Here’s the irony: Even as nonprofit news models are heralded as a way to continue hard-hitting, public-interest journalism and foundations are beginning to bankroll them, their reporters can’t truly act as watchdogs over government.

The Center, which is currently appealing its rejection, is collaborating with Free Press (where I work) and others to urge Congress to change the rule, which was originally intended as a way to keep advocacy groups out of government pressrooms.

“That rule has served to effectively block nonprofit news organizations, and we feel like it needs to be re-examined because it doesn’t serve the public’s interest,” says David Bennahum, president and CEO of the Center.

In response to the call for reform, Joe Keenan, director of the Daily Press Gallery, told Politico in May that the guidelines are being reexamined.

“It’s a whole new ballgame,” Keenan told Politico. “We just have to figure out how to deal for it. We don’t want to establish a precedent that allows every special interest group to get a credential.”

Bennahum understands the committee’s concern about lobbying restrictions, but believes the current rules are too simplistic. “The problem is that the instrument used to address those concerns is so crude and blunt,” he says. “It needs a scalpel and not a sledgehammer.”

Nonprofit news organizations are not new. Magazines like Mother Jones and The American Prospect — and, yes, In These Times — have been operating as nonprofit organizations for decades. What’s new is the urgency of journalism’s crisis and the blooming of online, local—often nonprofit—newsrooms across the country, such as VoiceofSanDiego.org and MinnPost.com.

As newspapers continue their death spiral, it’s heartening to see these innovative attempts to support freely available, quality journalism. But a news article is only as good as its sources. If nonprofit political journalists are routinely kept away from the Capitol—and the elected officials who work there—they’ll inevitably end up relying more on press releases and secondary sources for their reporting. And nonprofit organizations won’t have a prayer of joining the White House press corps if they’ve already been denied membership at the congressional press galleries.

“For those of us who try to cover the workings of Congress, [the press galleries are] ground zero, and you want to be there,” Bennahum says.

But nonprofit media aren’t only facing problems in Washington: Many state capitals look to the nation’s capital to set their own press gallery rules. (Bennahum says the Center’s Colorado Independent has encountered similar restrictions when trying to cover the Denver statehouse.) This is bad news for any citizen wondering where his state income tax dollars go, especially considering that the ranks of reporters covering the nation’s statehouses have decreased by 32 percent in the past six years, according to a recent American Journalism Review study.

“Part of our call for reform is that we know it will have a cascading effect [at the state level],” Bennahum said.

It’s beginning to make waves, in Washington at least. During a Senate hearing on the “Future of Journalism” held in May, Sen. John Kerry (D-Mass.) suggested one way to recognize the contributions of online journalists covering Congress. “We can make sure that the rules for credentialing congressional reporters are modernized,” Kerry said.

Here’s to hoping rule reform comes quick. The growing number of empty press gallery chairs should make us nervous. We need competent, fearless reporters to fill them, regardless of their tax status.

This entry was posted in RagBlog and tagged Congress, Journalism, Political Press. Bookmark the permalink.