Sarah the Scoundrel : The High Art of Lying 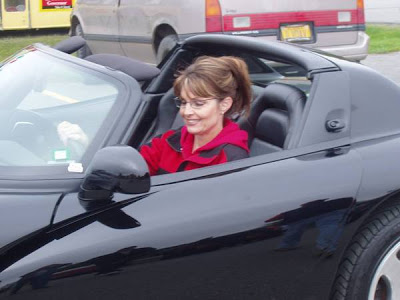 Sarah Palin: Drive-by liar?
‘When a candidate repeatedly lies about herself and her accomplishments, the lies reflect profound character disorders.’
By Sherman De Brosse / The Rag Blog / October 10, 2008

See video of Sarah Palin defending the ‘Bridge to Nowhere’ during 2006 campaign for governor, Below.

Sarah Palin has set a new standard of mendaciousness in politics. Americans are usually only slightly annoyed when one candidate tells a flat-out lie about an opponent. Palin and McCain have taken this to a new level, repeating the same lies even after numerous fact checkers disprove their claims. But these are only lies about an opponent, so people think they do not reflect on the liar’s character. Maybe they are only white, excusable lies.

But when a candidate repeatedly lies about herself and her accomplishments, the lies reflect profound character disorders. Her claim to having initiated action to act on behalf of Darfur demonstrates a shocking opportunism and that she has no respect for truth.

It is no surprise that Governor Sarah Palin lied about the State of Alaska ending its investment in Sudan. She claimed that as soon as she learned of the Darfur situation she took the lead in the divestment cause. In fact, she ignored a 2007 postcard campaign aimed at getting her to act. Save Darfur people also met with her staff in 2007. She did nothing. The fact is that the Palin Administration openly stated its opposition to divestment in 2008 and prevented it from coming to a vote! This is what her deputy revenue commissioner said in a hearing:

The legislation is well-intended, and the desire to make a difference is noble, but mixing moral and political agendas at the expense of our citizens’ financial security is not a good combination

The hearing minutes are on line as of this date. State Representative Les Gara said that killed the bill. He said, “I walked out of that hearing livid.” The committee would not vote on divestiture. The Alaska Permanent Fund still had the $22 million invested in Sudan as of a few weeks ago.

Some say she has the power as chief executive to change the investment. In the debate, she said action will be taken when the legislature reconvenes.

She lied about when she knew about the problem and about taking leadership at the outset. Perhaps she came to see Darfur as a winning political issue a little belatedly and decided she could still claim this as a political feather.

She retained two clear lies in her standard stump speech long after they were disproven.

1.) She boasted that she told Congress “thanks but no thanks” on the Bridge to Nowhere. The fact is Congress pulled the plug on the bridge and she then reversed her position. She had supported it.

2.) She said she opposed earmarks. The fact is she zealously pursued them as mayor and is seeking them as governor.

There are other important questions to be raised.

3.) She said she did not use religion in her first campaign for mayor. In fact she criticized the incumbent for not going to church enough.

4.) She told Wasilla employees their jobs were safe, and then she set about firing six department heads.

5.) She told the police chief she was firing him because the NRA disliked him. Then she changed her story and said the man intimidated her.

6.) The evidence is clear that she wanted to censor books in the library and that she tried to fire the chief librarian for not going along with censorship. Then she said the discussion was only hypothetical.

How can we believe anything this woman says. Can we believe her denials about Troopergate when she did so much to block the investigation?

For whatever reason, she believes it is right for her to lie whenever it accomplishes her political purpose. Her distorted claim that Obama’s limited ties to William Ayers constitute proof of lack of patriotism remind us of the axiom that patriotism is the last resort of a scoundrel. Her own words prove that she is, indeed, a scoundrel.

Sherman De Brosse is the peudonym for a retired history professor who was once chased off the Ohio University campus for protesting the John Birch Society. He is a contributor to The Rag Blog and also blogs at Sherm Says and on DailyKos.

Sarah Palin defending the ‘Bridge to Nowhere’ during the 2006 election: