Chomsky: "Progressive Legislation and Social Welfare Have Been Won by Popular Struggles, Not Gifts from Above" 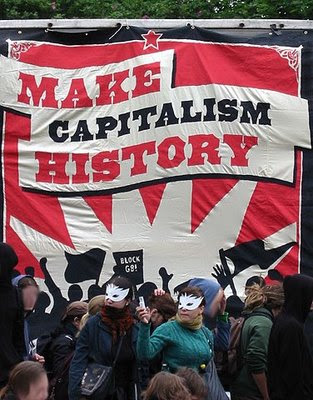 Anti-Democratic Nature of US Capitalism is Being Exposed
By Noam Chomsky / October 10, 2008

Bretton Woods was the system of global financial management set up at the end of the second World War to ensure the interests of capital did not smother wider social concerns in post-war democracies. It was hated by the US neoliberals – the very people who created the banking crisis, writes Noam Chomsky.

THE SIMULTANEOUS unfolding of the US presidential campaign and unraveling of the financial markets presents one of those occasions where the political and economic systems starkly reveal their nature.

Passion about the campaign may not be universally shared but almost everybody can feel the anxiety from the foreclosure of a million homes, and concerns about jobs, savings and healthcare at risk.

The initial Bush proposals to deal with the crisis so reeked of totalitarianism that they were quickly modified. Under intense lobbyist pressure, they were reshaped as “a clear win for the largest institutions in the system . . . a way of dumping assets without having to fail or close”, as described by James Rickards, who negotiated the federal bailout for the hedge fund Long Term Capital Management in 1998, reminding us that we are treading familiar turf. The immediate origins of the current meltdown lie in the collapse of the housing bubble supervised by Federal Reserve chairman Alan Greenspan, which sustained the struggling economy through the Bush years by debt-based consumer spending along with borrowing from abroad. But the roots are deeper. In part they lie in the triumph of financial liberalisation in the past 30 years – that is, freeing the markets as much as possible from government regulation.

These steps predictably increased the frequency and depth of severe reversals, which now threaten to bring about the worst crisis since the Great Depression.

Such interventionism is a regular feature of state capitalism, though the scale today is unusual. A study by international economists Winfried Ruigrok and Rob van Tulder 15 years ago found that at least 20 companies in the Fortune 100 would not have survived if they had not been saved by their respective governments, and that many of the rest gained substantially by demanding that governments “socialise their losses,” as in today’s taxpayer-financed bailout. Such government intervention “has been the rule rather than the exception over the past two centuries”, they conclude.

In a functioning democratic society, a political campaign would address such fundamental issues, looking into root causes and cures, and proposing the means by which people suffering the consequences can take effective control.

The financial market “underprices risk” and is “systematically inefficient”, as economists John Eatwell and Lance Taylor wrote a decade ago, warning of the extreme dangers of financial liberalisation and reviewing the substantial costs already incurred – and proposing solutions, which have been ignored. One factor is failure to calculate the costs to those who do not participate in transactions. These “externalities” can be huge. Ignoring systemic risk leads to more risk-taking than would take place in an efficient economy, even by the narrowest measures.

The task of financial institutions is to take risks and, if well-managed, to ensure that potential losses to themselves will be covered. The emphasis is on “to themselves”. Under state capitalist rules, it is not their business to consider the cost to others – the “externalities” of decent survival – if their practices lead to financial crisis, as they regularly do.

Financial liberalisation has effects well beyond the economy. It has long been understood that it is a powerful weapon against democracy. Free capital movement creates what some have called a “virtual parliament” of investors and lenders, who closely monitor government programmes and “vote” against them if they are considered irrational: for the benefit of people, rather than concentrated private power.

Investors and lenders can “vote” by capital flight, attacks on currencies and other devices offered by financial liberalisation. That is one reason why the Bretton Woods system established by the United States and Britain after the second World War instituted capital controls and regulated currencies.*

The Great Depression and the war had aroused powerful radical democratic currents, ranging from the anti-fascist resistance to working class organisation. These pressures made it necessary to permit social democratic policies. The Bretton Woods system was designed in part to create a space for government action responding to public will – for some measure of democracy.

John Maynard Keynes, the British negotiator, considered the most important achievement of Bretton Woods to be the establishment of the right of governments to restrict capital movement.

In dramatic contrast, in the neoliberal phase after the breakdown of the Bretton Woods system in the 1970s, the US treasury now regards free capital mobility as a “fundamental right”, unlike such alleged “rights” as those guaranteed by the Universal Declaration of Human Rights: health, education, decent employment, security and other rights that the Reagan and Bush administrations have dismissed as “letters to Santa Claus”, “preposterous”, mere “myths”.

In earlier years, the public had not been much of a problem. The reasons are reviewed by Barry Eichengreen in his standard scholarly history of the international monetary system. He explains that in the 19th century, governments had not yet been “politicised by universal male suffrage and the rise of trade unionism and parliamentary labour parties”. Therefore, the severe costs imposed by the virtual parliament could be transferred to the general population.

But with the radicalisation of the general public during the Great Depression and the anti-fascist war, that luxury was no longer available to private power and wealth. Hence in the Bretton Woods system, “limits on capital mobility substituted for limits on democracy as a source of insulation from market pressures”.

The obvious corollary is that after the dismantling of the postwar system, democracy is restricted. It has therefore become necessary to control and marginalise the public in some fashion, processes particularly evident in the more business-run societies like the United States. The management of electoral extravaganzas by the public relations industry is one illustration.

“Politics is the shadow cast on society by big business,” concluded America’s leading 20th century social philosopher John Dewey, and will remain so as long as power resides in “business for private profit through private control of banking, land, industry, reinforced by command of the press, press agents and other means of publicity and propaganda”.

Differences can be detected in the current election as well. Voters should consider them, but without illusions about the political parties, and with the recognition that consistently over the centuries, progressive legislation and social welfare have been won by popular struggles, not gifts from above.

Those struggles follow a cycle of success and setback. They must be waged every day, not just once every four years, always with the goal of creating a genuinely responsive democratic society, from the voting booth to the workplace.

* The Bretton Woods system of global financial management was created by 730 delegates from all 44 Allied second World War nations who attended a UN-hosted Monetary and Financial Conference at the Mount Washington Hotel in Bretton Woods in New Hampshire in 1944.

Bretton Woods, which collapsed in 1971, was the system of rules, institutions, and procedures that regulated the international monetary system, under which were set up the International Bank for Reconstruction and Development (IBRD) (now one of five institutions in the World Bank Group) and the International Monetary Fund (IMF), which came into effect in 1945.

The chief feature of Bretton Woods was an obligation for each country to adopt a monetary policy that maintained the exchange rate of its currency within a fixed value.

The system collapsed when the US suspended convertibility from dollars to gold. This created the unique situation whereby the US dollar became the “reserve currency” for the other countries within Bretton Woods.

Noam Chomsky is professor emeritus of linguistics at the Massachusetts Institute of Technology. His writings on linguistics and politics have just been collected in The Essential Chomsky, edited by Anthony Arnove, from the New Press.

1 Response to Chomsky: "Progressive Legislation and Social Welfare Have Been Won by Popular Struggles, Not Gifts from Above"