Sex Crimes in the White House 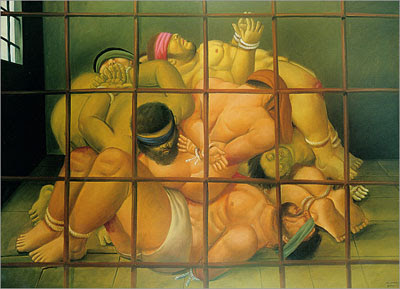 Naomi Wolf is a best-selling author and essayist.

NEW YORK – Sex crime has a telltale signature, even when those directing the outrages are some of the most powerful men and women in the United States. How extraordinary, then, to learn that one of the perpetrators of these crimes, Condoleezza Rice, has just led the debate in a special session of the United Nations Security Council on the use of sexual violence as a weapon of war.

I had a sense of déjà vu when I saw the photos that emerged in 2004 from Abu Ghraib prison. Even as the Bush administration was spinning the notion that the torture of prisoners was the work of “a few bad apples” low in the military hierarchy, I knew that we were seeing evidence of a systemic policy set at the top. It’s not that I am a genius. It’s simply that, having worked at a rape crisis center and been trained in the basics of sex crime, I have learned that all sex predators go about things in certain recognizable ways.

We now know that the torture of prisoners was the result of a policy set in the White House by former Secretary of Defense Donald Rumsfeld, Vice President Dick Cheney, and Rice — who actually chaired the torture meetings. The Pentagon has also acknowledged that it had authorized sexualized abuse of detainees as part of interrogation practices to be performed by female operatives. And documents obtained by the American Civil Liberties Union have Rumsfeld, in his own words, checking in on the sexualized humiliation of prisoners.

The sexualization of torture from the top basically turned Abu Ghraib and Guantánamo Bay into an organized sex-crime ring in which the trafficked sex slaves were US-held prisoners. Looking at the classic S and M nature of some of this torture, it is hard not to speculate that someone setting policy was aroused by all of this. And Phillipe Sands’ impeccably documented Torture Team: Rumsfeld’s Memo and the Betrayal of American Values, now proves that sex crime was authorized and, at least one source reports, eroticized: Diane Beaver, the Staff Judge Advocate at Guantanamo who signed off on many torture techniques, told Sands about brainstorming sessions that included the use of “sexual tension,” which was “culturally taboo, disrespectful, humiliating and potentially unexpected.”

“These brainstorming meetings at Guantanamo produced animated discussion,” writes Sands. “‘Who has the glassy eyes?” Beaver asked herself as she surveyed the men around the room, thirty or more of them. She was invariably the only woman in the room, keeping control of the boys. The younger men would get excited, agitated, even: “You could almost see their dicks getting hard as they got new ideas” [reported Beaver]. A wan smile crossed Beaver’s face: “And I said to myself, you know what, I don’t have a dick to get hard, I can stay detached.”‘ [Sands, p 63]

The nonsexual torture that was committed ranged from beatings and suffocation, electrodes attached to sensitive areas, and forced sleep deprivation, to prisoners being hung by the wrists from the ceiling and placed in solitary confinement until psychosis was induced. These abuses violate both US and international law. Three former military attorneys, recognizing this blunt truth, refused to participate in the “military tribunals” — rather, “show trials” — aimed at condemning men whose confessions were elicited through torture.

Though we can now debate what the penalty for waterboarding should be, America as a nation, maintaining an odd silence, still cannot seem to discuss the sex crimes involved.

Why? It’s not as if the sex crimes that US leaders either authorized or tolerated are not staring Americans in the face: the images of male prisoners with their heads hooded with women’s underwear; the documented reports of female US soldiers deployed to smear menstrual blood on the faces of male prisoners, and of military interrogators or contractors forcing prisoners to simulate sex with each other, to penetrate themselves with objects, or to submit to being penetrated by objects. Indeed, the Military Commissions Act of 2006 was written deliberately with loopholes that gave immunity to perpetrators of many kinds of sexual humiliation and abuse.

The perpetrator is also likely to engage in ever-escalating rationalizations, often arguing that the offenses serve a greater good. Finally, the victim is blamed for the abuse: in the case of the detainees, if they would only “behave,” and confess, they wouldn’t bring all this on themselves.

Silence, and even collusion, is also typical of sex crimes within a family. Americans are behaving like a dysfunctional family by shielding sex criminals in their midst through silence.

Just as sex criminals — and the leaders who directed the use of rape and sexual abuse as a military strategy — were tried and sentenced after the wars in Bosnia and Sierra Leone, so Americans must hold accountable those who committed, or authorized, sex crimes in US-operated prisons. Throughout the world, this perverse and graphic criminality has added fuel to anxiety about US cultural and military power. These acts need to be called by their true names — war crimes and sex crimes — and people in America need to demand justice for the perpetrators and their victims. As in a family, only when people start to speak out and tell the truth about rape and sexual assault can the healing begin.

1 Response to Sex Crimes in the White House