This time-tested poet/activist writes with irony, outrage, ardor, and not a little humor. 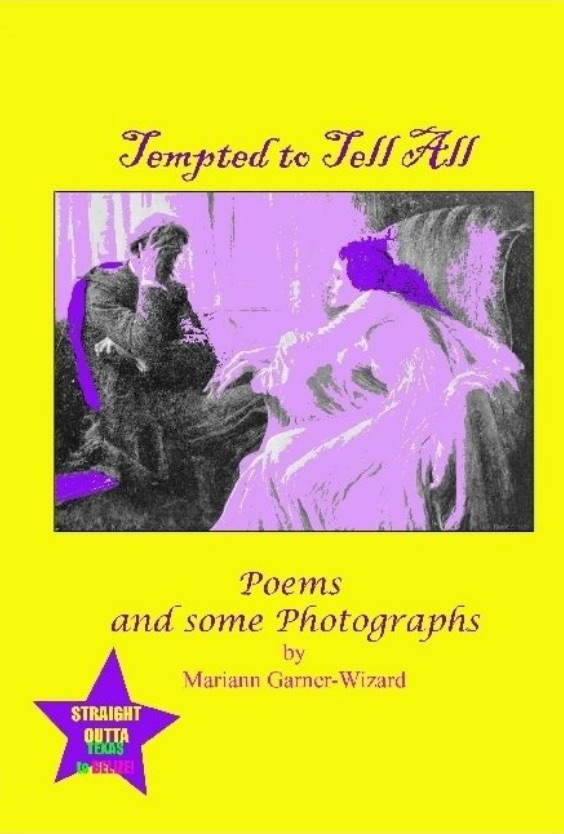 Mariann Garner-Wizard introduces her latest book of poetry, Tempted to Tell All, with a quote from Aravind Adiga’s The White Tiger about the power of poems to “spill out” secrets that can enable the poor to win their “ten-thousand-year brain war” with the rich. This collection, written during the last months of Mariann’s over 50 years in Austin and the three years since she moved away, unapologetically spills out these secrets — and more.

Whether “tearing aside the curtain” to champion social justice, commemorating friends and fellow revolutionaries who have passed on, celebrating love and passion, contemplating life’s meaning, or simply reflecting on the importance of living in the moment, this time-tested poet/activist writes with irony, outrage, ardor, and not a little humor.

“Witness Protection,” one of the most powerful political poems in this collection, is an insightful, urgent call for action. Written in 2014, the poem is even more relevant in the current dark days of Trump rule. Certainly, with the recent anguish at the border where children have been summarily imprisoned and wrenched from the arms of their asylum-seeking parents, and more recently whole families teargassed, we have, in Mariann’s words, “seen things that would make a rock cry.” Like the author, we all need protection from the terrible consequences of our collective failure to wake up.

“Excerpts from Lee Otis Johnson’s Body,” was written at the behest of the late community organizer, Robert E. Lee III. This epic, consisting of three parts of a larger unfinished work, aims at writing the dignity back into the life of Johnson, who as a former leader of the Student Nonviolent Coordinating Committee (SNCC), was sentenced back in the Nineteen Sixties to 30 years in prison for possession of a single marijuana cigarette. Contextualizing Johnson’s struggle in Houston, a city born of Yankee founders determined “to extract every ounce of profit from each enterprise and resource,” the poem mourns “the theft of student aspirations and parents’ dreams” and protests the fact that Johnson ended up vilified and buried in a pauper’s grave.

In the same vein, “Speaking of Crimes Against Humanity” focuses on the hypocrisy of U.S. conquerors bewailing the destruction by guerrilla forces of ancient artifacts in the Middle East. “How dare we call it bad!” Mariann’s lines thunder, pointing out the sordid history of U.S. world domination including genocide committed against Native peoples at home and the unleashing of the horror of nuclear weapons on Hiroshima. In answer to the question, “Mustn’t the old make way for the new?” comes the righteous resounding retort: “Ask the Iroquois or the Sioux!/ Ask the Aztec or the Incan;/ take your time and let it sink in./ Intolerance is nothing new./ Ask the Tutsi or the Jew.”

The title poem, “Tempted to Tell All,” constitutes Mariann’s 2016 farewell to Austin and the problems of living in the belly of the beast. Recounting the worsening economic and political situation, the poem decries the trust put into rigged elections by ordinary Americans and expresses indignation that the system is loaded against the poor. “To do a job right, you have to use the right tool,” Mariann advises. “Y’all keep on electing promises and neglecting powers;/ I’ma go off to Belize an’ smell the flowers!”

The largest single group of poems making up this book is love poems. These are honest, electric, sometimes ecstatic verses, opening a door into Mariann’s life in the Caribbean with Edwardo Ernesto “Ras Pelaz” Vasquez, whose photograph adorns some of the pages. One picture portrays the author and her new life partner above the caption, “The Sun and the Moon,” with the classic Caribbean ceramics of the two heavenly spheres, a wedding gift, on the wall behind them.

A sweet poem of adoration, “Charming” proclaims in its first stanza: “Anyone with eyes can see you are a prince,/ Wherever your kingdom might have been, it was long ago lost,/ so you are royal here and now,/ ruling with kindness, a helping hand, and/ that voice that opens men’s hearts,/ Natural Man, your dignity undimmed/ by dusty feet and faded shirt.” Matching in tone are “3 Haikus for rasta,” one of which exults: “That he is mine–/this wild bird, this lion!–/ sobers me, yet is my wine.” Another, “Easy?” notes that “Falling in love is easy/Living in love is hard,” yet concludes, “We hold fast to our promise,/ take a breath, hear out the Other,/ do better, and find, between dramatic crises,/ strength to reach for, peace to touch.”

Other poems reflect Mariann’s love affair with her new home, its tastes, its sounds, its peculiarities and perils. “Smell the Morning!” is an affectionate, wry early-morning account of being awakened by garbage trucks, while “Gracias a Chac Mool” in Spanish, gives tribute to the Mayan rain god. “Fruits of Belize” takes us on a culinary tour, reveling in the tastes of messy mangos, Belize’s popular snack “choco bananas,” and the exotic sapodilla fruit. About the latter, the author quips, “It’s a good thing no one thinks that Eden was over here,/ or the sapodilla might be blamed, instead of apple’s wormy sphere,/ for Eve’s mistake!” Still, the Mayans used the fruit, “And if it brought some knowledge, their gods did not begrudge it./ The lovely sapodilla: enjoy, but do not judge it.” In “Walking on Caliche,” the poet compares the limestone caliche of her native Texas to the “white marl” of Belize that houses “scrubby, stubborn, sharp-tongued things.” Though warned of the pitfalls of white marl, she reflects that she has been successfully walking on it her entire life.

Other poems reflect Mariann’s philosophical and even spiritual views. For example, “Hereing” tells of a pleasure-loving, living-in-the-moment cat who is quick to learn relevant English words, especially if they lead to an ear-rub. The lesson from the cat? “Be hear now/ So let me learn to here what each moment has to say,/ this curled cat, this breeze, the fresh wash,/ this little morning poem.”

“We Are All Going,” is Mariann’s vision of our mutual destination: a “far country, where the sun shines every day,” where “bright colors serenade us on every corner,” and “everyone we meet will be a friend.” Observing that “we go at our own pace, each by our own paths,” the poet leaves us with this thought: “Travel light wherever you go, light of heart, light of being./ Leave nothing but footprints and memories,/ want nothing but love and grace./ Let there always be a smile upon your face.”

Lest matters philosophical and spiritual be deemed too serious, too preacherly, however, Mariann has included in her collection selections like the archly irreverent “Becoming Hindu Haikus.” These three short humorous poems ask, “Who can resist/ “Endless dancing,/ monkey gods/ the relief of belief?” and “What’s not to like?” in a religion with “sacred cows, elephants, lovers,/ reincarnation!”

The collection’s final poem, “Entropie,” sums up the poet’s optimism even as “suns burn down, nebulae fall,/ black holes proliferate and all/ that has been seen before winks out.” Though she concedes “this pie would challenge the digestion/ of any gods still left to question,” she nevertheless anticipates the eventual eruption of “vast potential,” like “nine billion blackbirds” “bursting out” — “and somewhere out there, you and me.”

Tempted to Tell All tells us a lot, a lot about righting wrongs, experiencing love and connection, and enjoying the act of living with meaning and purpose. Mariann Wizard is a poet who writes like she speaks — energetically, whimsically, perceptively, and with a lot of Texas sass. If you know Mariann, reading this volume is like sitting down with her over coffee and sharing her latest insights, all the while getting a glimpse of her new life in Belize. And if you haven’t had the privilege of meeting her, let’s just say you’re in for a treat.

[Sharon Shelton is a former Rag worker, longtime feminist, and retired English professor who wrote “The Rag and Women’s Liberation” in the book, Celebrating the Rag.]