The two-day event was designed to ‘improve our experience of community… by transforming public spaces and making them into special places.’ 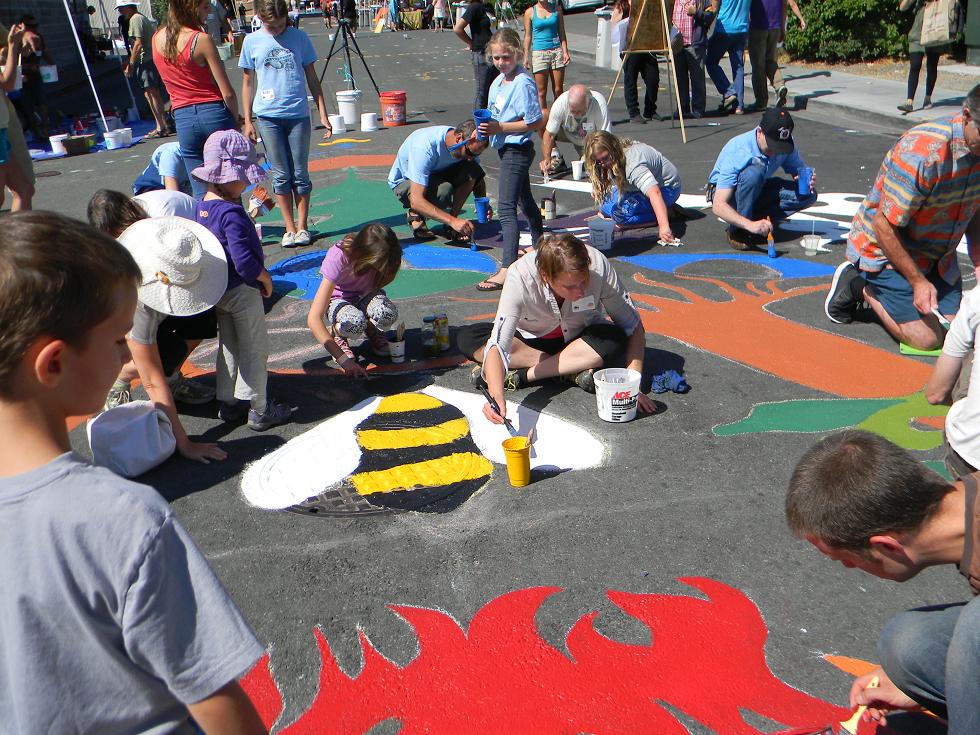 In Sebastopol, California: Painting the village red… and yellow, and… Photo by Marty Roberts / Cittaslow Sebastopol.

On the final day, a colorful, active parade marched from the weekly farmers’ market in the downtown plaza through a newly-painted street with murals of salmon, dogs, coyote tracks, a Spirit Bird, and other wildlife. Over 400 people, including many children, participated in that painting. One theme of the march was climate protection, coinciding with the People’s Climate March (PCM) in New York City and elsewhere around the planet on Sept. 21. 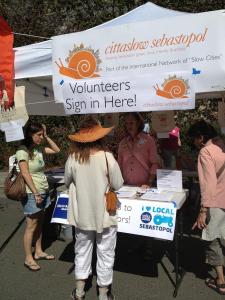 In booth is former Mayor Sarah Gurney. On left is Maggie Fleming of Transition US. Photo by Marty Roberts.

VBCs originated in Portland, Oregon, instigated by the group City Repair, which has hosted them for 14 years. They spread to over 50 places in the United States, including Olympia, Washington, Minnesota’s Twin Cities, and Asheville, North Carolina. VBCs have also happened in Canada, Brazil, India, and Australia. With fewer than 8,000 residents, Sebastopol — located in semi-rural Sonoma County — may be the smallest town to host a VBC. People came from throughout the San Francisco Bay Area and beyond for Sebastopol’s VBC.

An attractive 40-page program welcomed residents and visitors “to community generated, hands-on projects and celebrations.” It outlined numerous activities — placemaking, the daily Open Village, evening talks, a workshop by City Repair founder Mark Lakeman, concerts, yoga, a healing village, and film showings. The goals included to “improve our experience of community and make lasting improvements in our town by transforming public spaces and making them into special places.”

Among the hands-on projects that beautified the town were building a cob bus stop, cob oven, and bench from straw and clay.

Among the hands-on projects that beautified the town were building a cob bus stop, cob oven, and bench from straw and clay, a fence on one side of the Grange Hall, and gardening. Some of these ongoing efforts were begun before the 10 days and will continue after.

Reclaiming healthy food was among the themes. Participants dug, raked, weeded, and planted gardens. VBC collaborated with the Ceres Community Project, which engages teens in growing and cooking nourishing food for community members with serious illnesses. 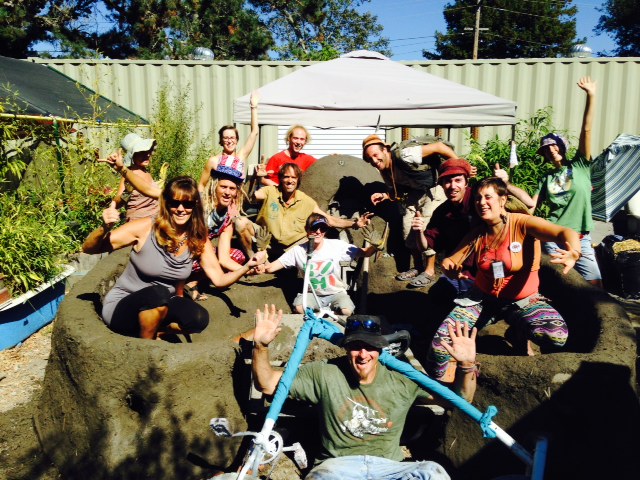 On most afternoons, a large tent outside the Grange provided an Open Village with a clothing swap, bike repair station, and snacks, tea, wine, and beer. It offered a “Cross-Pollination Lounge,” where people were invited to “create the village you want to live in,” swap resources, host a conversation, partake of free seeds and books, or visit the kids corner.

Among the VBC’s many sponsors are the following: Transition Sebastopol, dedicated to “building community resilience”; Cittaslow Sebastopol, which indicates that the town qualifies as one of a growing number of “slow cities” around the globe; the Grange, an agriculture-based group which has existed for nearly 150 years, since the 1880s in Sebastopol; and The Barlow, a collection of local merchants along a street that was painted by volunteers.

“We chose to partner with the Village Builders because we loved the idea of engaging the community to create public art and participate in ‘placemaking,’” noted Cittaslow’s Tasha Beauchamp. “From our Eco-Tourism Open House we learned that it was a community priority to make a stronger connection between The Barlow and the downtown. The murals were a perfect way to take the Intersection Repair concept and apply it to create the bridge between the new and the old parts of our city.”

‘We gather to take responsibility for our times, to create positive change, to reclaim our commons.’

“We gather to take responsibility for our times, to create positive change, to reclaim our commons, to connect ourselves with our place,” declared Jeanna Collet at the VBC’s opening. The City Council had voted unanimously to co-sponsor the VBC. Vice-Mayor Patrick Slater attended the opening and the final evening of presentations. Other City Council members attended some of the many events. 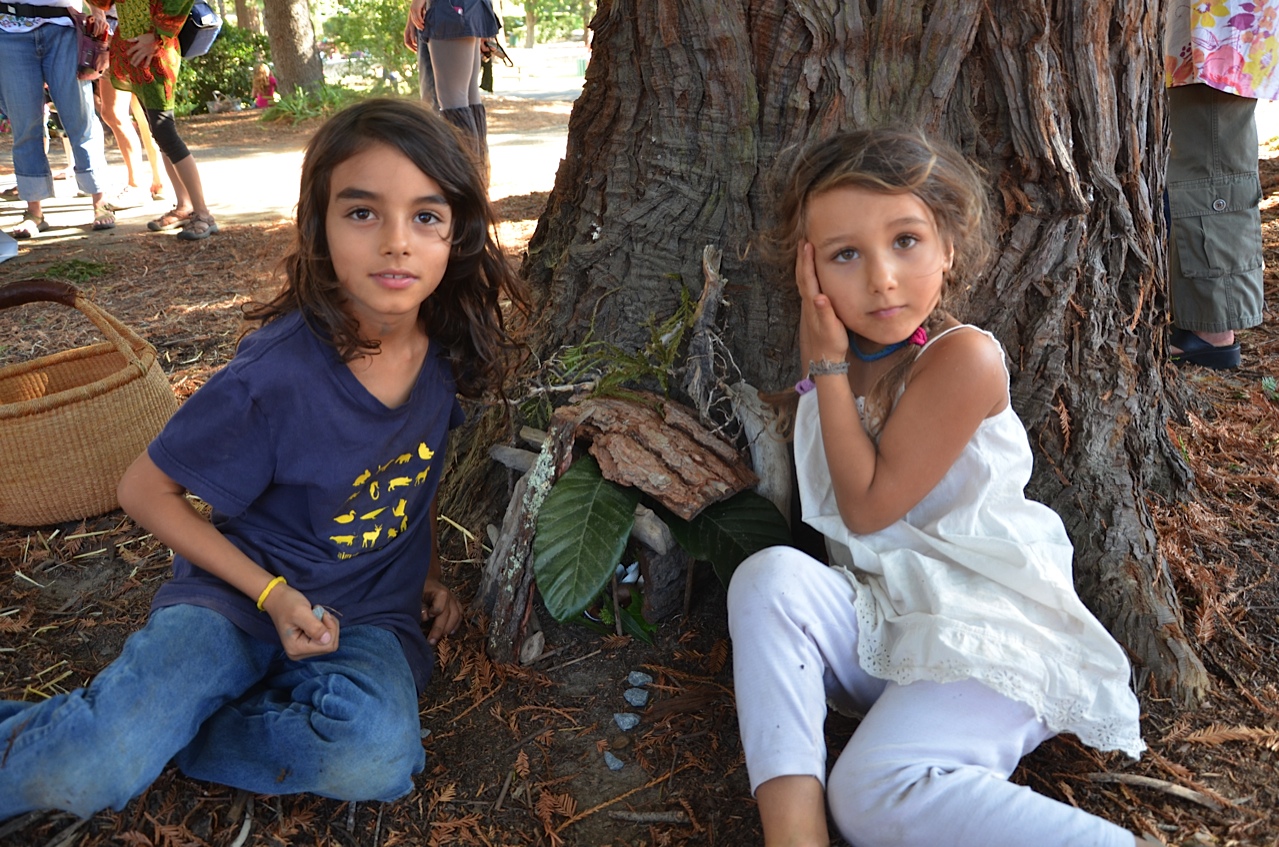 Mayor Robert Jacob reported recently meeting in Portland with City Repair’s Lakeman, whom he invited to come to Sebastopol to meet with City officials. “What makes a community like Sebastopol unique is service,” Mayor Jacob declared on the final evening of presentations. “People continue to give of themselves.” He announced a new City Repair Ordinance that is almost complete, co-authored by City Council member and former mayor Sarah Gurney, who has been an active VBC supporter.

“We are planting seeds this year, such as projects and ideas,” said Sebastian Collet, an architect who returned home to Sebastopol after working on Portland’s VBC. He lives on a four-generation family compound on two acres in Sebastopol. “I’m glad that we’ve created a safe container where our one-year-old Obie can wonder around,” he noted on the VBC’s last day.

“We want people to think about the commons and who should decide about it,” Collet explained. “We want people to take ownership for common space and to dream up the world they want to live in. My intention is to build bridges. I love to build, including relationships with each other. I want to spark people’s imaginations.”

“Ours is a disoriented and disorienting world,” noted VBC’s Cassandra Ferrera. “I’m committed to our remembering our place,” she added. Ferrera has been one of the main persons to meet with the Sebastopol City Council. “Our City Council wants this to happen,” she said. “Mayor Jacob was just in Portland to find out how to enable this in Sebastopol. We have an active partnership with the City.” 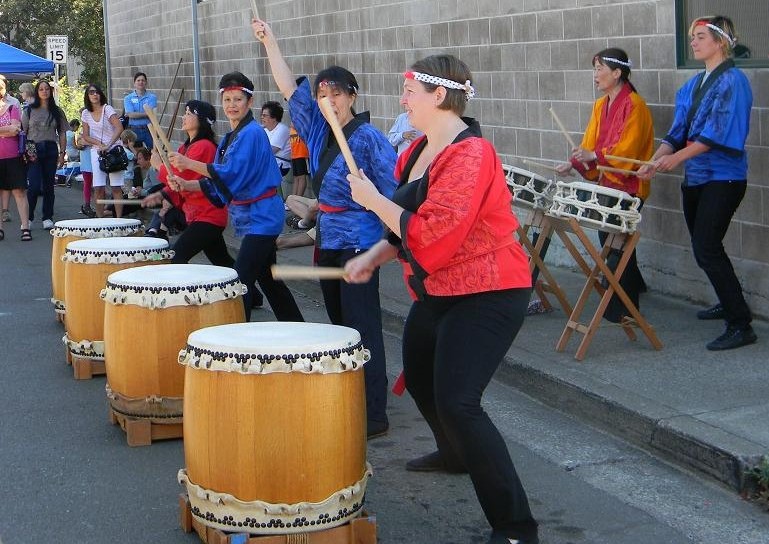 Drumming up a storm in Sebastopol. Photo by Marty Roberts / Cittaslow Sebastopol.

Portland’s Lakeman provided one of the VBC’s highlights on the final day of presentations with a highly-interactive, practical, four-hour workshop entitled “Re-Wilding the Commons.” He explained that “re-wilding means our re-inhabiting. This is our home. We have a birthright. Unlike what we have been told, we are not alone. We are each part of a larger self.”

Lakeman invited participants to stand and then sit in a circle, which was later divided into smaller circles, which addressed questions such as the following: “What do you love about your place? What issues and opportunities are there where you live?”

By the end of the workshop there were three circles of people creatively re-designing an intersection of streets in their neighborhoods. They were soon sitting on the floor de-constructing carcentric crossroads with a stronger presence of nature.

Cars are recent innovations. Streets should be more for talking and greeting.

“Cars are recent innovations,” Lakeman declared. “Streets should be more for talking and greeting. An intersection of streets should be mainly for connecting and breaking isolation. In permaculture, we learn that as we come out of isolation we can build real intimacy. Permaculture has to do with patterns, identifying them and developing new ones. Diversity is at the edges. The problem is the solution.”

“The Earth is treated as a commodity,” Lakeman asserted. “Capitalism and democracy collide.”

“Permaculture is an ecological design approach based on principles of natural systems,” added Erik Ohlsen, owner of Permaculture Artisans. “Permaculture seeks to regenerate the ecological services of the earth while developing and maintaining basic human infrastructure and production of agricultural goods through mutually beneficial relationships between humans and their environment. Permaculture is a global movement designing and implementing a resilient future; it integrates economic, social and ecological solutions for the planet and people.”

“We have two overwhelming global issues — the concentration of power and wealth in a few hands and climate change,” declared author Starhawk in an interview before her speech on social design. “The solution is community-based caring, rather than greed and exploiting others. City Repair is so creative. It brings people to express themselves and present solutions.” 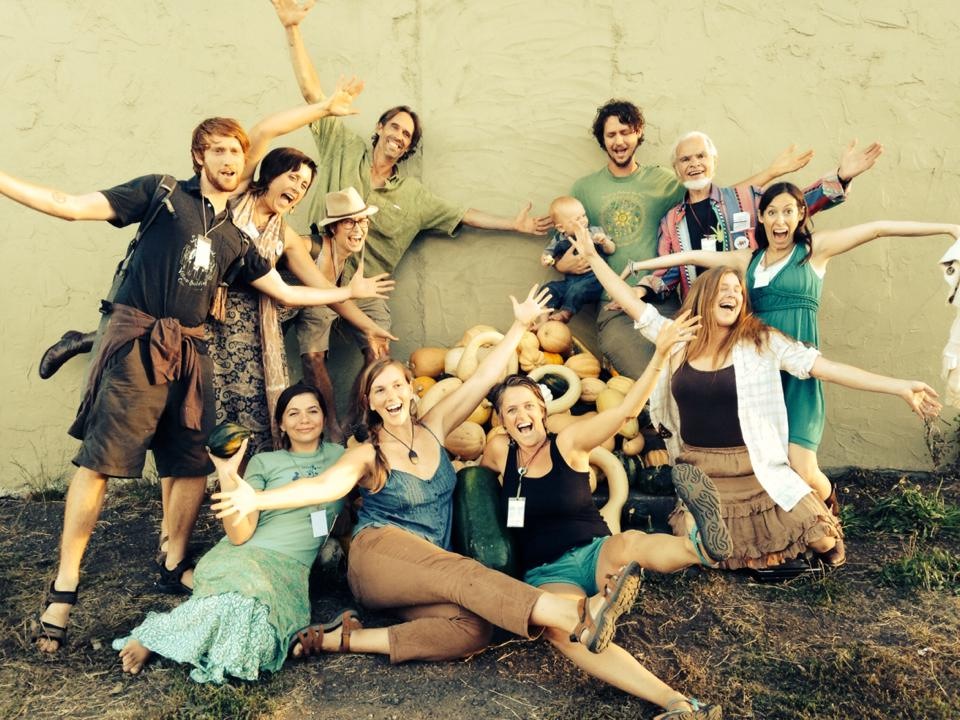 The Sebastopol VBC volunteer crew. That’s The Rag Blog‘s Shepherd Bliss on the right in the back row — with the white beard.

The author of The Empowerment Manual and many other books, Starhawk advocated decentralized approaches to leadership. The long-time activist in Occupy San Francisco and other groups spoke about the difficulties of balancing direct democracy with getting things done. “We need a clear understanding of power. There is power over — top down with bosses. There is another power, when power comes from within.”

‘The commons are actually reclaiming me and instilling a sense of place and home.’

“The commons are actually reclaiming me and instilling a sense of place and home,” said organizer Maggie Fleming, who co-directs Transition US. “Through these nature-based projects, we’ve been reconnecting with our natural environment and extending our definition of a village to include all the plants and wildlife in our community.”

“VBC has had something for everyone,” noted Fleming, “activities for kids, wisdom sharing from elders, natural building, art, mischief and shenanigans, music, dance and yoga, conversations about community, talks by local luminaries and placemaking leaders, ritual, and celebration.”

“I am particularly interested in how we can change the cultural narrative we are all guided by from the popular media, to one that honors and respects the earth,” explained organizer Julia Bystrova. “I am scheming to derail the culture that imprisons us,” she added.

“My intention is to slow the destruction of the Earth,” noted Marissa Mommaerts of the Post-Carbon Institute and Transition US. “We need to address issues like racism and sexism,” she added.

“If we are to create a just society for posterity, we will need to opt out of the dominant consumer culture,” added organizer Jeremiah Garcia. “We need to shift away from a fossil fuel economy and transport ourselves more by bikes,” asserted team member Lindsey Whited. 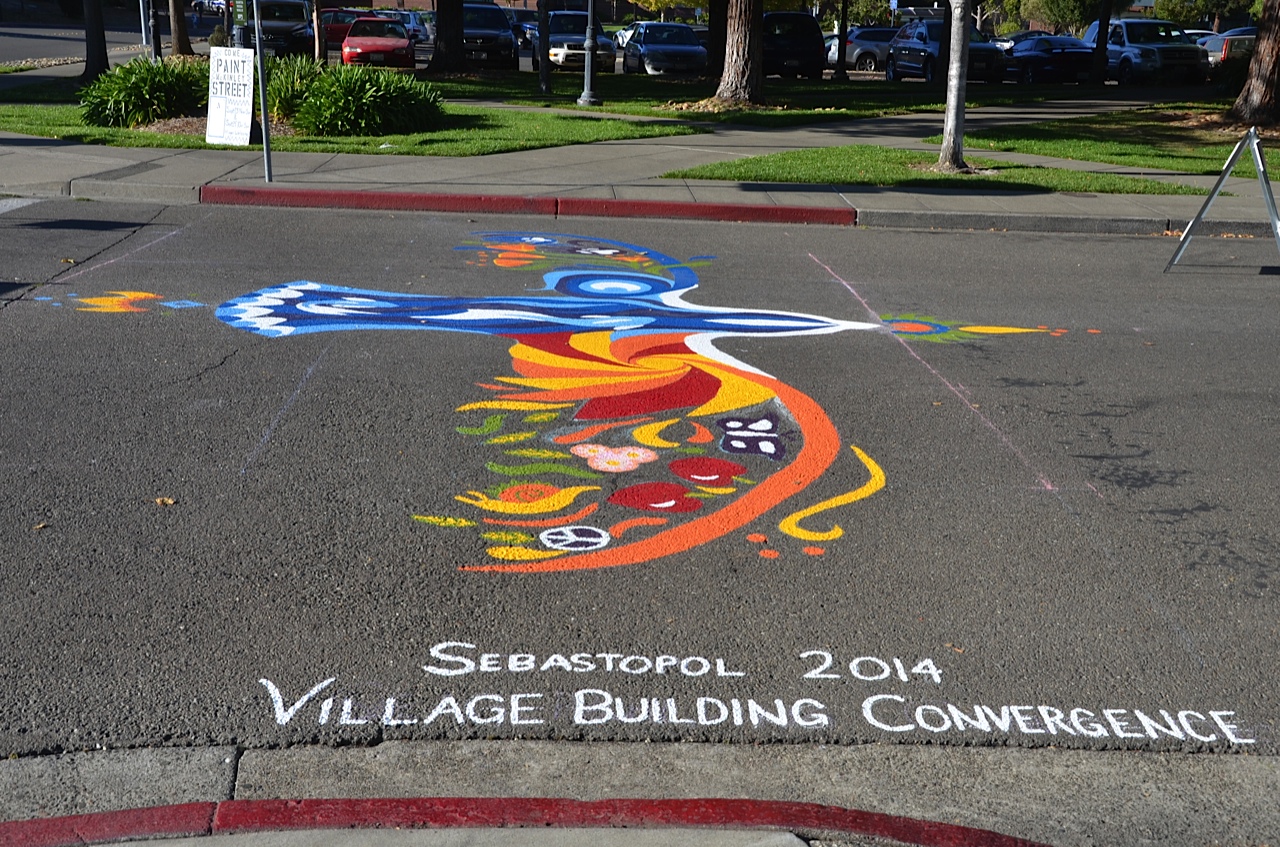 Over and out. Photo by Sebastian Collet.

Sebastopol’s VBC reached beyond city limits. It organized a tour of the rural La Tierra Community, which has existed for 26 years and currently has 17 residents. And the group put together a trip to the Josie’s Garden in the city of Petaluma to assist in the transformation of an unused driveway into a neighborhood garden.

Our Front Yard Project: Sebastopol’s Living History Garden is an ongoing project located between City Hall and the Library. “So much of Daily Acts work has to do with connection and collaboration,” explained Ryan Johnston of that Petaluma-based group. It partnered with Permaculture Artisans to beautify that visible, well-trafficked area. “Our goal is to nourish community for generations to come,” added Johnston.

Plans for the Second Annual Sebastopol VBC are already being developed. A better world is possible.

Find out more at www.sebastopolvbc.org. Also read “Neighbors come together to build the village” by Shepherd Bliss on The Rag Blog.