Tom Hayden :
Marching for a green economy ‘built to last’ 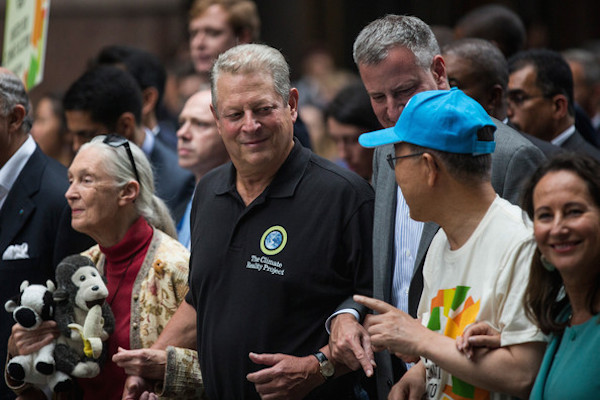 NEW YORK — With hundreds of thousands of marchers converging on the United Nations climate summit, New York Mayor Bill de Blasio took the opportunity to declare a massive initiative to reduce greenhouse gas emissions by 30 percent by 2030, calling it “a moral imperative.”

The 111-page plan, called One City: Built to Last, was strongly supported by the City Council and a diverse network of community-based organizations. Its major focus will be on retrofits of the city’s public and private buildings. In city-owned properties the goal is to cut emissions by 30 percent below 2006 levels in three years.

The New York announcement is consistent with a growing environmental strategy of building a clean energy economy from the bottom in the face of a U.S. Congress dominated by climate deniers.

In a New York Times op-ed September 21 a former U.S. environmental official, Daniel Esty, in a column titled, “Bottom-Up Climate Fix,” endorsed the strategy. He asked, “Why not invite leaders from states, provinces, cities and companies to join representatives of national governments in signing the anticipated 2015 climate change agreement?”

The strategy, piloted for years by California, is rapidly gaining traction due to timelines for greenhouse gas reductions set by the United Nations summit talks planned through 2015. The timelines are pressuring national leaders, including President Obama, to announce goals for measures to prevent an overheated planet by 2050. Taken together, U.S. states now embracing low-carbon energy policies represent 166 million Americans and $7 trillion GDP.

The Rockefeller Brothers Fund, founded on oil wealth, announced its plan to divest its $890 million from fossil fuel companies.

The UN deadline also prompted the Rockefeller Brothers Fund, founded on oil wealth, to announce its plan to divest its $890 million from fossil fuel companies. Nearly 200 institutions are in the process of divesting from fossil fuels and turning instead to renewable resources.

In the New York City case, a city Climate Action Plan was developed as early as 2006 but the focus of the De Blasio mayoral campaign and his early administration was on economic inequality. The dateline of the UN climate summit energized New York political and community leaders to speed up developing their urban environmental platform to showcase in New York. (Indeed, the announcement was carried on page one of The New York Times.)

The Mayor has long wanted to be “a climate hero,” according to one insider who helped develop the plan, making the climate march and UN summit a perfect context to vault the environmental agenda forward.

Under De Blasio, New York has a major opportunity to fuse the movements against inequality and carbon pollution into one vast laboratory of social change. The effects of pollution fall most heavily on people of color and working class communities, while the activist base of the environmental movement — as demonstrated by the New York march — is overwhelmingly white and young, organized by groups like 350.org and Avaaz.

If New Yorkers and de Blasio can integrate those movements into a strategy of building a clean energy economy, the U.S. will begin to restore credibility at the UN climate talks scheduled for Lima in late November. The demand of Third World countries is for a green infrastructure bank to cope with the ravages of climate change and develop along sustainable lines.

7 Responses to Tom Hayden :
Marching for a green economy ‘built to last’