Sky is Falling : The Press and Evan Bayh’s Retirement 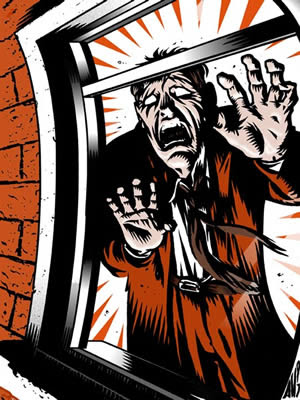 On February 15, 2010, the sky began to fall, at least according to media pundits. Incumbent Senator Evan Bayh announced that he was not running for a third term as senator from Indiana.

The press scurried to construct a frame on the story that would be compatible with corporate spin. The Democratic Party is doomed. No alternative candidate could possibly surface in this red state to maintain the Democratic Party edge in the Senate. The Bayh announcement, the stories said, followed on a flood of other announcements by Democrats. Bayh was just the latest of the entire class of incumbent Democrats who were fleeing the sinking ship.

Why did the Senator from Indiana choose to retire even though he had at least a ten-point lead on any possible Republican opponent and a multi-million dollar war chest for his campaign? Well, Bayh said he had had enough of partisanship, polarization, and the broken system called Congress. And he, the good centrist, had been unable to lead the ne’er do well partisans to the compromise table.

And, the media suggested, the sainted Democrat resigned out of frustration because the “left” in the Democratic Party could not be tamed. The sub-text in the news suggested that once again the system is coming crashing down because of those dogmatic politicians who support real health care reform, a jobs bill that would create jobs, finance reform with teeth, and a substantial reduction in wasteful spending justified by reckless war. When will they ever learn.

Democrats in the state of Indiana now will have a chance to select a candidate who can represent the interests of the people rather than the health care industry. The source of the Congressional gridlock has been the Republicans who have opposed every piece of legislation and every nominee to fill an administrative position recommended by the Democrats and the White House. And, the efforts to stifle governance by the Republicans have been aided and abetted by a handful of centrist Democrats such as Evan Bayh who oppose real health care reform and labor rights.

Bayh’s voting record earned him an Americans for Democratic Action rating of 70, which is fairly liberal (his fellow Hoosier Senator Richard Lugar has a rating of 25). But Bayh’s senatorial career is marked by extreme fluctuations from one congressional session to another. As Ezra Klein reported last April:

In the 109th Congress, Bayh’s voting pattern suddenly develops an uncharacteristic liberalism. He becomes the 19th most conservative member, with a record more liberal than, among others, Joe Biden. As context, these were also the years when Bayh was preparing for the presidential run that he eventually aborted.

In the 110th Congress, however, that flash of liberalism gives way to a career-high conservatism: He actually displaces Nelson as the Caucus’s most conservative member.

In addition to being an on-again off-again liberal and a reigning centrist today, Senator Bayh served as chairman of the Democratic Leadership Council from 2001 to 2005, and a member of the Senate Centrist Coalition and other centrist sounding legislative bodies. He was also a member of the Board of Directors of the National Endowment for Democracy.

Perhaps most important, his wife, Susan Bayh, has earned over $250,000 in stock options for serving on the board of the giant health insurance company Wellpoint. Though the Senator has denied being influenced by his wife’s corporate ties, he has expressed his preference for maintaining the primacy of the marketplace for health care.

My own preference would be — and you may have found common ground here this morning on Easter, which is appropriate — deal with the inefficiencies, figure out a way to make the private marketplace accomplish our public good, only have the government role as a backstop, as a last resort, if the private sector has just failed to meet the challenge. [Evan Bayh on Fox, Sunday, April 12, 2009]

Hoosier Democrats need to do what all progressive Democrats need do over the next election period. Identify progressive candidates who will address and commit themselves to the 2008 Obama campaign agenda (whether Obama supports it or not). That means meaningful health care reform, support for the Employee Free Choice Act, real climate change legislation, and a jobs package that will put millions of Americans back to work. In Indiana a candidate standing on that record would be a significant improvement over Evan Bayh.

3 Responses to Sky is Falling : The Press and Evan Bayh’s Retirement