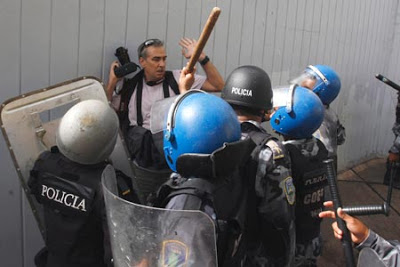 801 journalists have been killed since 1992, and the profession seems to be getting more dangerous — not less.

Hundreds of thousands of young people in the United States and across the globe picture themselves as someday becoming famous journalists. They see the profession as rather glamorous, and hope to be the next Woodward, Bernstein, Murrow, or Cronkite — covering great achievements like the moon landing, exposing injustices like abuse of the farmworkers, or bringing down a government by bringing to light its corrupt practices.

A very few of them might actually accomplish this, provided they have the stamina to work the long hours, the ability to recognize and write a great story, the courage to fight corporate ownership, and the ability to live on a less than stellar salary for many years. But while those may be roadblocks to the desired fame, there is an even darker side to journalism.

That darker side is that a journalist who seeks to write or report the truth, instead of being rewarded with fame and fortune, may actually be subjected to exile, imprisonment, or even death (and some just disappear). There are many governments, organizations, and people who don’t want the truth revealed, and are capable of doing vile things to suppress it.

This is not just true in developing nations or with tyrannical regimes, but all over the world including the United States (you may remember the murder of radio broadcaster Alan Berg a few years ago by white supremacists). Even here in the United States, which is supposedly a free country with a free press, it is not all that uncommon to find journalists jailed for something like refusing to reveal a confidential source (without which they could not properly do their job).

According to the Committee to Protect Journalists (CPJ), which tries to keep abuses of journalists in the public eye to help protect them, 136 journalists were imprisoned worldwide in 2009. Here are the eleven worst violators:

Fifteen other nations have imprisoned at least one journalist for trying to do his/her job, including a freelance journalist in Iraq, Ibrahim Jassam, who is being held by the United States military. The Iraqi Central Criminal Court has ruled there was no evidence to hold him and ordered his release, but the U.S. military has refused to do so. They continue to hold him in prison without evidence and without charges.

And while we’re on this subject, bloggers and other internet writers of news or politics shouldn’t be too smug or too sure of their own security. Over half of those currently in prison are “internet journalists.”

But in a way, those imprisoned are the lucky ones — because they are at least still alive. In 2009, at least 71 journalists were killed in the line of duty — the most since CPJ began keeping track in 1992. In fact, 801 journalists have been killed since 1992, and the profession seems to be getting more dangerous — not less. Here are the 20 deadliest countries for journalists:

While knowing the truth is necessary for freedom, reporting that truth is now, and always has been, a very dangerous profession.

1 Response to A Dangerous Profession : Worldwide Abuse of Journalists