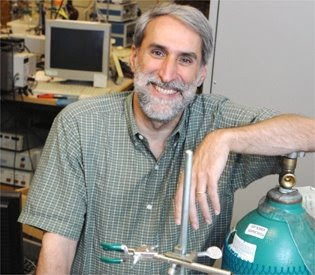 MIT’s Daniel Nocera.
‘Now we can seriously think about solar power as unlimited and soon’
August 2, 2008

CAMBRIDGE, Mass. – Within 10 years, homeowners could power their homes in daylight with solar photovoltaic cells, while using excess solar energy to produce hydrogen and oxygen from water to power a household fuel cell. If the new process developed at the Massachusetts Institute of Technology finds acceptance in the marketplace, electricity-by-wire from a central source could be a thing of the past.

“This is the nirvana of what we’ve been talking about for years,” said MIT’s Daniel Nocera, senior author of a paper describing the simple, inexpensive, and efficient process for storing solar energy in the July 31 issue of the journal “Science.”

“Solar power has always been a limited, far-off solution. Now we can seriously think about solar power as unlimited and soon,” Nocera said.

Until now, solar power has been a daytime-only energy source, because storing extra solar energy for later use is expensive and inefficient. But Nocera and his team of researchers have hit upon an elegant solution.

Inspired by the photosynthesis performed by plants, Nocera and Matthew Kanan, a postdoctoral fellow in Nocera’s lab, have developed a new process that will allow the Sun’s energy to be used to split water into hydrogen and oxygen gases.

Later, the oxygen and hydrogen can be recombined inside a fuel cell, creating carbon-free electricity to power buildings, homes or electric cars – day or night.

The key component in the new process is a new catalyst that produces oxygen gas from water – another catalyst produces valuable hydrogen gas.

The new catalyst consists of cobalt metal, phosphate and an electrode, placed in water.

When electricity from a photovoltaic cell, a wind turbine or any other source runs through the electrode, the cobalt and phosphate form a thin film on the electrode, and oxygen gas is produced.

Combined with another catalyst, such as platinum, that can produce hydrogen gas from water, the system can duplicate the water splitting reaction that occurs in plants during photosynthesis.

The new catalyst works at room temperature, in neutral pH water, and is easy to set up, Nocera said. “That’s why I know this is going to work. It’s so easy to implement,” he said.

Sunlight has the greatest potential of any power source to solve the world’s energy problems, said Nocera. In one hour, enough sunlight strikes the Earth to provide the entire planet’s energy needs for one year.

James Barber, a leader in the study of photosynthesis who was not involved in this research, called the discovery by Nocera and Kanan a “giant leap” toward generating clean, carbon-free energy on a massive scale.

“This is a major discovery with enormous implications for the future prosperity of humankind,” said Barber, the Ernst Chain Professor of Biochemistry at Imperial College London. “The importance of their discovery cannot be overstated since it opens up the door for developing new technologies for energy production thus reducing our dependence for fossil fuels and addressing the global climate change problem.”

Currently available electrolyzers, which split water with electricity and are often used industrially, are not suited for artificial photosynthesis because they are very expensive and require an environment that has little to do with the conditions under which photosynthesis operates.

More engineering work needs to be done to integrate the new scientific discovery into existing photovoltaic systems, but Nocera said he is confident that such systems will become a reality.

“This is just the beginning,” said Nocera, principal investigator for the Solar Revolution Project funded by the Chesonis Family Foundation and co-Director of the Eni-MIT Solar Frontiers Center. “The scientific community is really going to run with this.”

The project is part of the MIT Energy Initiative, a program designed to help transform the global energy system to meet the needs of the future and to help build a bridge to that future by improving today’s energy systems.

MITEI Director Ernest Moniz said, “This discovery in the Nocera lab demonstrates that moving up the transformation of our energy supply system to one based on renewables will depend heavily on frontier basic science.”

This project was funded by the National Science Foundation and by the Chesonis Family Foundation, which gave MIT $10 million this spring to launch the Solar Revolution Project, with a goal to make the large scale deployment of solar energy within 10 years.