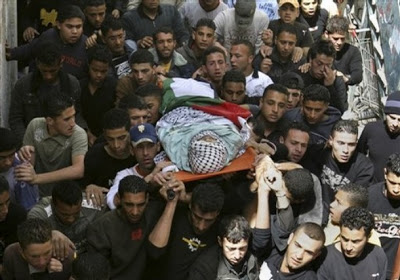 Palestinian mourners carry the body of Al-Aqsa Martyrs Brigades militant Hani Al-Kabi who was killed in an Israeli army raid in the Balata refugee camp, during his funeral in the West Bank town of Nablus, Friday, April 18, 2008. Photo by Nasser Ishtayeh / AP
Twilight Zone: ‘Worse than apartheid’
By Gideon Levy / July 15, 2008

I thought they would feel right at home in the alleys of Balata refugee camp, the Casbah and the Hawara checkpoint. But they said there is no comparison: for them the Israeli occupation regime is worse than anything they knew under apartheid. This week, 21 human rights activists from South Africa visited Israel. Among them were members of Nelson Mandela’s African National Congress; at least one of them took part in the armed struggle and at least two were jailed. There were two South African Supreme Court judges, a former deputy minister, members of Parliament, attorneys, writers and journalists. Blacks and whites, about half of them Jews who today are in conflict with attitudes of the conservative Jewish community in their country. Some of them have been here before; for others it was their first visit.

For five days they paid an unconventional visit to Israel – without Sderot, the IDF and the Foreign Ministry (but with Yad Vashem, the Holocaust Memorial and a meeting with Supreme Court President Justice Dorit Beinisch. They spent most of their time in the occupied areas, where hardly any official guests go – places that are also shunned by most Israelis.

On Monday they visited Nablus, the most imprisoned city in the West Bank. From Hawara to the Casbah, from the Casbah to Balata, from Joseph’s Tomb to the monastery of Jacob’s Well. They traveled from Jerusalem to Nablus via Highway 60, observing the imprisoned villages that have no access to the main road, and seeing the “roads for the natives,” which pass under the main road. They saw and said nothing. There were no separate roads under apartheid. They went through the Hawara checkpoint mutely: they never had such barriers.

Jody Kollapen, who was head of Lawyers for Human Rights in the apartheid regime, watches silently. He sees the “carousel” into which masses of people are jammed on their way to work, visit family or go to the hospital. Israeli peace activist Neta Golan, who lived for several years in the besieged city, explains that only 1 percent of the inhabitants are allowed to leave the city by car, and they are suspected of being collaborators with Israel. Nozizwe Madlala-Routledge, a former deputy minister of defense and of health and a current member of Parliament, a revered figure in her country, notices a sick person being taken through on a stretcher and is shocked. “To deprive people of humane medical care? You know, people die because of that,” she says in a muted voice.

The tour guides – Palestinian activists – explain that Nablus is closed off by six checkpoints. Until 2005, one of them was open. “The checkpoints are supposedly for security purposes, but anyone who wants to perpetrate an attack can pay NIS 10 for a taxi and travel by bypass roads, or walk through the hills.

The real purpose is to make life hard for the inhabitants. The civilian population suffers,” says Said Abu Hijla, a lecturer at Al-Najah University in the city.

In the bus I get acquainted with my two neighbors: Andrew Feinstein, a son of Holocaust survivors who is married to a Muslim woman from Bangladesh and served six years as an MP for the ANC; and Nathan Gefen, who has a male Muslim partner and was a member of the right-wing Betar movement in his youth. Gefen is active on the Committee against AIDS in his AIDS-ravaged country.

“Look left and right,” the guide says through a loudspeaker, “on the top of every hill, on Gerizim and Ebal, is an Israeli army outpost that is watching us.” Here are bullet holes in the wall of a school, there is Joseph’s Tomb, guarded by a group of armed Palestinian policemen. Here there was a checkpoint, and this is where a woman passerby was shot to death two years ago. The government building that used to be here was bombed and destroyed by F-16 warplanes. A thousand residents of Nablus were killed in the second intifada, 90 of them in Operation Defensive Shield – more than in Jenin. Two weeks ago, on the day the Gaza Strip truce came into effect, Israel carried out its last two assassinations here for the time being. Last night the soldiers entered again and arrested people.

It has been a long time since tourists visited here. There is something new: the numberless memorial posters that were pasted to the walls to commemorate the fallen have been replaced by marble monuments and metal plaques in every corner of the Casbah.

“Don’t throw paper into the toilet bowl, because we have a water shortage,” the guests are told in the offices of the Casbah Popular Committee, located high in a spectacular old stone building. The former deputy minister takes a seat at the head of the table. Behind her are portraits of Yasser Arafat, Abu Jihad and Marwan Barghouti – the jailed Tanzim leader. Representatives of the Casbah residents describe the ordeals they face. Ninety percent of the children in the ancient neighborhood suffer from anemia and malnutrition, the economic situation is dire, the nightly incursions are continuing, and some of the inhabitants are not allowed to leave the city at all. We go out for a tour on the trail of devastation wrought by the IDF over the years.

Edwin Cameron, a judge on the Supreme Court of Appeal, tells his hosts: “We came here lacking in knowledge and are thirsty to know. We are shocked by what we have seen until now. It is very clear to us that the situation here is intolerable.” A poster pasted on an outside wall has a photograph of a man who spent 34 years in an Israeli prison. Mandela was incarcerated seven years less than that. One of the Jewish members of the delegation is prepared to say, though not for attribution, that the comparison with apartheid is very relevant and that the Israelis are even more efficient in implementing the separation-of-races regime than the South Africans were. If he were to say this publicly, he would be attacked by the members of the Jewish community, he says.

Under a fig tree in the center of the Casbah one of the Palestinian activists explains: “The Israeli soldiers are cowards. That is why they created routes of movement with bulldozers. In doing so they killed three generations of one family, the Shubi family, with the bulldozers.” Here is the stone monument to the family – grandfather, two aunts, mother and two children. The words “We will never forget, we will never forgive” are engraved on the stone.

No less beautiful than the famed Paris cemetery of Pere-Lachaise, the central cemetery of Nablus rests in the shadow of a large grove of pine trees. Among the hundreds of headstones, those of the intifada victims stand out. Here is the fresh grave of a boy who was killed a few weeks ago at the Hawara checkpoint. The South Africans walk quietly between the graves, pausing at the grave of the mother of our guide, Abu Hijla. She was shot 15 times. “We promise you we will not surrender,” her children wrote on the headstone of the woman who was known as “mother of the poor.”

Lunch is in a hotel in the city, and Madlala-Routledge speaks. “It is hard for me to describe what I am feeling. What I see here is worse than what we experienced. But I am encouraged to find that there are courageous people here. We want to support you in your struggle, by every possible means. There are quite a few Jews in our delegation, and we are very proud that they are the ones who brought us here. They are demonstrating their commitment to support you. In our country we were able to unite all the forces behind one struggle, and there were courageous whites, including Jews, who joined the struggle. I hope we will see more Israeli Jews joining your struggle.”

She was deputy defense minister from 1999 to 2004; in 1987 she served time in prison. Later, I asked her in what ways the situation here is worse than apartheid. “The absolute control of people’s lives, the lack of freedom of movement, the army presence everywhere, the total separation and the extensive destruction we saw.”

Madlala-Routledge thinks that the struggle against the occupation is not succeeding here because of U.S. support for Israel – not the case with apartheid, which international sanctions helped destroy. Here, the racist ideology is also reinforced by religion, which was not the case in South Africa. “Talk about the ‘promised land’ and the ‘chosen people’ adds a religious dimension to racism which we did not have.”

Equally harsh are the remarks of the editor-in-chief of the Sunday Times of South Africa, Mondli Makhanya, 38. “When you observe from afar you know that things are bad, but you do not know how bad. Nothing can prepare you for the evil we have seen here. In a certain sense, it is worse, worse, worse than everything we endured. The level of the apartheid, the racism and the brutality are worse than the worst period of apartheid.

“The apartheid regime viewed the blacks as inferior; I do not think the Israelis see the Palestinians as human beings at all. How can a human brain engineer this total separation, the separate roads, the checkpoints? What we went through was terrible, terrible, terrible – and yet there is no comparison. Here it is more terrible. We also knew that it would end one day; here there is no end in sight. The end of the tunnel is blacker than black.

“Under apartheid, whites and blacks met in certain places. The Israelis and the Palestinians do not meet any longer at all. The separation is total. It seems to me that the Israelis would like the Palestinians to disappear. There was never anything like that in our case. The whites did not want the blacks to disappear. I saw the settlers in Silwan [in East Jerusalem] – people who want to expel other people from their place.”

Afterward we walk silently through the alleys of Balata, the largest refugee camp in the West Bank, a place that was designated 60 years ago to be a temporary haven for 5,000 refugees and is now inhabited by 26,000. In the dark alleys, which are about the width of a thin person, an oppressive silence prevailed. Everyone was immersed in his thoughts, and only the voice of the muezzin broke the stillness.