SPORT / Dave Zirin : Why the NFL is Thinking Pink 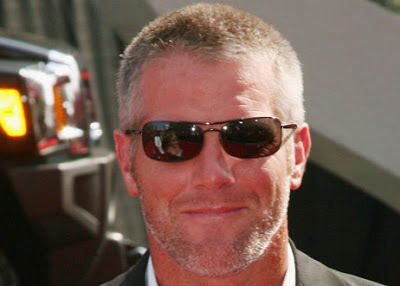 You may have noticed an abundance of pink on the fields of the National Football League this month. Between the pink sneakers, pink mouth guards, and pink wristbands, one would be excused for wondering how the machismo-drenched league became so fabulous overnight.

Welcome to the NFL’s celebration of Breast Cancer Awareness month. But there are reasons beyond the altruistic for the league’s sudden concern with women’s health. In September the league launched a $10 million public relations effort to woo female fans, which included the marketing of NFL jeans, sandals, and yoga mats. The 33 men that run the NFL have determined that this explosion of pink is just another way to say, “We care about our female fans: from their yoga to their tumors.”

Courageous as it may be to take a stand on the polarizing issue that is breast cancer, the NFL’s new efforts to woo the female fan come off as desperate and patronizing. Women go to the games for the same reason as men: to have fun and cheer themselves hoarse. But the NFL has taken on this campaign because there are those in the owner’s box who fear the league has financially peaked.

In a country where teams ensconced in Buffalo and Jacksonville are struggling to stay solvent, the internal expansion market has run dry. In a nation still in the grips of a Great Recession, attendance is down across the board. In a world where hatred of American football is a point of national pride, the NFL isn’t going to find revenue streams overseas. In an economic climate where the well of public subsidies is parched, the need to expand the fan base has become something of mania. Enter the pink.

This concern for female sensitivities is also the reason why Minnesota Vikings quarterback Brett Favre might be in a whole world of trouble. For those living in witness protection, Favre is being investigated by the NFL for violating the league’s personal conduct policy. The website deadspin.com posted voice messages and penis-pictures Favre is alleged to have sent to team employee Jenn Sterger, when both were with the New York Jets.

Two Jets masseuses have since emerged with similar stories, albeit without the now ubiquitous photos of Favre’s “Mississippi Burning.” These photos now wallpaper the internet and yes, this is another one of those sports stories that makes us all want to bathe in bleach. Brett Favre’s dong is like Lebron James: we are all witnesses. 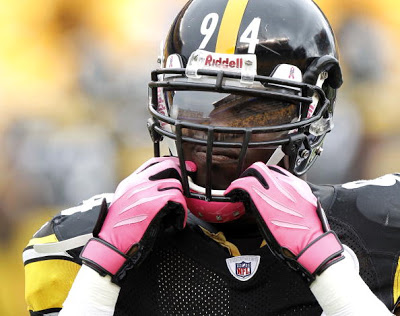 Photo from Getty Images.
It also puts Favre in the position of now having to scramble to defend his career, legacy, and status as an athletic icon. Love him or hate him, Favre has had without question, one of the most remarkable careers in the history of sports. In 19 NFL seasons, he has as of this writing, 290 consecutive starts, 500 touchdown passes, and 70,000 yards passing: all records. Now his consecutive start streak could be snapped along with his reputation.

The sad truth is that in an era where sports scandals swirl all around us, redemption is a young person’s game. If you are Michael Vick or Tiger Woods or Alex Rodriguez, and can emerge from disgrace to excel on the field, much is forgiven and forgotten. If you are Roger Clemens or Barry Bonds or Mark McGwire, the last memory becomes indelible.

It doesn’t matter if your crimes are misdemeanors, felonies, or just an inability to control your libido. The field is like Lourdes and you are a SportsCenter highlight away from forgiveness.

Favre, however, is 41, missing throws he used to make in his sleep and for the first time in his long career, hearing from columnists that he should be benched. Roger Goodell, longing for that pink dollar, might agree.

But if Goodell thinks that female football fans will be twirling their parasols and raising their mint juleps in gratitude for his chivalry, then the Commish clearly hasn’t spent enough time in the stands of NFL games. If Goodell really wants to respect female fans, he should ban the cheerleaders, ban the sexist beer commercials, and continue to enforce equity and access for women journalists.

All the rest of this is smoke and mirrors for a league flailing for dollars. Favre may have royally crossed the line but larger concerns will determine the price that he pays.

[Dave Zirin is the author of Bad Sports: How Owners are Ruining the Games we Love (Scribner). Contact him at edgeofsports@gmail.com. This article also appears at The Nation.]

2 Responses to SPORT / Dave Zirin : Why the NFL is Thinking Pink