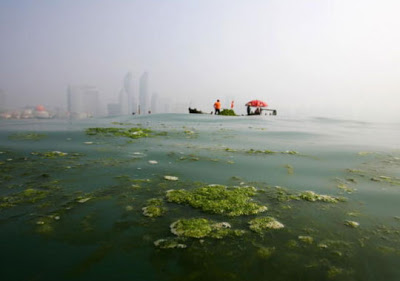 Chinese fishmen remove green algae from the sea on July 4, 2008 in Qingdao, Shandong, China. More than 1,000 boats and 5,000 fishmen have been mobilized to clean up green algae which has invaded the Olympic sailing venue. Photo by Guang Niu / Getty Images.
Olympic Sailors Facing Polluted Seas
By D’Arcy Doran / July 7, 2008

World class sailors are rarely afraid of water but the bright green algae that adorns the surface of their Beijing Olympics venue has left many boaters fearing for their health.

The grass-like growths that have choked parts of the sailing course at Qingdao has thrown an unwelcome spotlight on China’s environmental record and forced an ongoing cleanup by more than 10,000 people. Boats, bulldozers and the military have been deployed to remove the eyesore.

But for many Olympic sailors it’s what they can’t see in the water that is their greatest concern. After several test events in Qingdao, sailors realize they have an added opponent at this Olympics — pollution.

“You don’t really want to go sailing around in pollution and I’ve never sailed in a place that’s more polluted than this,” said Australian coach Euan McNicol, a former skiff world champion.

Almost every team has stories of members falling ill, or cuts and scrapes getting infected after contact with the Qingdao water.

The most shocking story is that of Australian sailor Elise Rechichi, who swallowed water when she slipped on a boat ramp during a test event here in 2006. It took her 10 months to recover from severe gastric trauma that had her in and out of hospital.

“It’s made us all reasonably wary of what’s going on,” McNicol said, adding Rechichi was not currently training in Qingdao, but she will be back in August.

With the Olympics only a month away, athletes cannot risk falling sick and are taking few chances.

“Everybody is being very careful about the pollution, making sure they don’t drink the water, trying not to have too much contact with the water, and not swallowing it,” Swiss coach Nicolas Novara said.

On Saturday, officials briefly claimed victory over the algae saying the course had been cleared.

But Qu Chun, the 2008 Olympic sailing competition manager said the bloom has not been totally wiped out, estimating that 2-5 percent of the course was still affected, down from nearly a third a week earlier.

Officials have said the algae is the result of a hot spell after heavy rain, but environmentalists said such blooms are largely due to sewage and agricultural pollutant run-off.

Israeli windsurfer Maayan Davidovich believes the cleanup work could be paying off. In her latest two week training stint in Qingdao she managed to avoid falling into the water.

“It’s not clean, but two years ago it was much worse, you would see bags and things floating in. Now you’re not seeing bags,” she said.

Canadian coach Dave Hughes said the water quality has improved a lot, but there are still spots where sailors track through what smell like sewage.

“You have two schools of people: those who complain about it — because it really is a terrible venue in terms of sailing, it’s horrendous — or those who just say it is what it is and you approach it as best you can,” Hughes said.

Qu, the competition manager, who competed for China 20 years ago and managed his country’s sailing team during the 2000 Olympics in Sydney, disputes that Qingdao is more polluted than other courses around the world.

“The water’s not poison and it won’t harm the athletes,” he said.

He said the stomach problems experienced by athletes following previous races in Qingdao could be caused by a variety of factors, such as not being used to Chinese food.

The government has invested heavily to clean up Qingdao’s water, he said, with new facilities moving sewage away from the coast and into the deep sea.

“Now you can see the bottom of the marina, before I couldn’t see it,” Qu said.

This entry was posted in RagBlog and tagged China, Environment, Olympics, pollution, Sports. Bookmark the permalink.