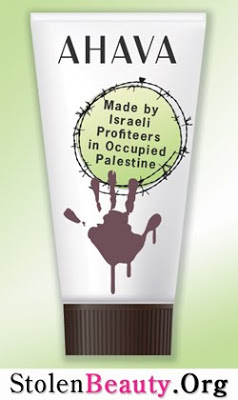 More than 30 people carried picket signs in front of the Gateway Shopping Center in Austin on Saturday, April 24, urging shoppers to boycott ULTA Beauty for refusing to take Ahava Dead Sea cosmetics off their shelves.

The Austin protests, which began the previous week at the Sunset Valley ULTA store, are part of an international campaign to call attention to resources taken from illegal Israeli settlements. The UN has declared the Israeli settlements in Palestine to be a violation of international law and Ahava violates the fourth Geneva Convention by exploiting Palestine’s natural resources.

More on the boycott campaign can be found at www.StolenBeauty.org. 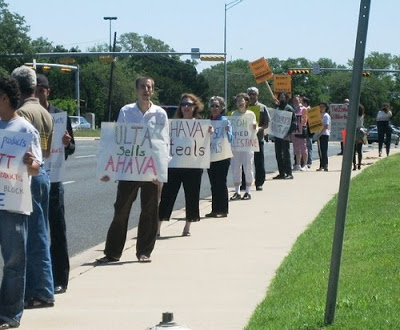 We’ve joined this international campaign to call attention to the illegal Israeli settlements and the theft of Palestinian resources. By telling shoppers to boycott ULTA, we are calling attention both to the occupation and to the fact that Ahava is marked as “made in Israel” when it is really made in occupied Palestine.

The boycott efforts have been organized by the Interfaith Community for Palestinian Rights, CodePink, and the UT Palestinian Solidarity Committee. Members of the groups have approached the managers of four ULTA stores and asked them to remove Ahava products but they refused.