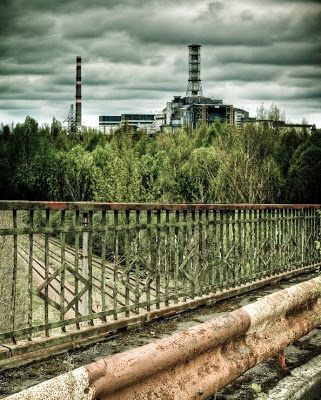 After the explosion at Reactor 4 [at Chernobyl] the people of Pripyat flocked to the railway bridge just outside the city to get a good view of the reactor to see what had happened.

Initially, everyone was told that the radiation level was minimal and that they were safe. Little did they know that much of the radiation had been blown onto this bridge in a huge spike.

They saw beautiful rainbow coloured flames of the burning graphite nuclear core, whose flames were higher than the smoke stack itself. All of them are dead now — they were exposed to levels of over 500 roentgens, which is a fatal dose.

For the ecology and the economy:
Chernobyl demands a REAL climate bill

This week 24 years ago, untold quantities of lethal radiation began pouring into the atmosphere from the catastrophic explosion at Chernobyl Unit 4. Nearly a million people have died because of it.

And on this horrific anniversary we have now seen the stumble of a very bad climate bill. The events are directly related.

But after nearly a quarter-century of industry denial, the New York Academy of Sciences has published, Chernobyl: Consequences of the Catastrophe for People and the Environment, the definitive catalog and analysis. Drawing on some 5,000 studies, three Russian scientists have placed the ultimate death toll at 985,000.

The authors include Russian biologist Dr. Alexey Yablokov, former environmental advisor to the president of Russia; Dr. Alexey Nesterenko, a biologist in Belarus; and Dr.Vassili Nesterenko, a physicist who was, at the time of the accident, director of the Institute of Nuclear Energy of the National Academy of Sciences of Belarus. The book has been edited by Dr. Janette Sherman, a toxicologist expert in the health impacts of radioactivity.

As Karl Grossman has shown, Chernobyl’s death toll stretches worldwide. Its apocalyptic cloud blanketed Europe and blew across the northern tier of the United States. Sheep in Scotland and milk in New England were heavily contaminated, along with countless square miles of land and sea.

Ohio’s Davis-Besse may have come within a fraction of an inch of such a disaster, and has again been found with potentially apocalyptic structural flaws. Michigan’s Fermi I and the infamous Three Mile Island Unit 2 did melt.

Now the brand new Toshiba-Westinghouse AP-1000 design has been deemed by the Nuclear Regulatory Commission as unable to withstand earthquakes, hurricanes, or tornadoes, and has turned up with a critical generic flaw that could cause it to explode.

Which is where the climate bill comes in.

Widespread reports of what it contained were to be clarified with its planned introduction on Chernobyl Day. But co-sponsor Lindsay Graham (R-SC) abruptly withdrew, apparently amidst partisan wrangling over immigration.

By all accounts this bill included a fossil industry wish-list, with big money for “clean coal,” off-shore drilling, a disembowelment of the EPA, and much more. With oil fires raging at sea and miners being buried in the coal fields, how this bill would actually solve the climate crisis remains unclear.

What WAS clear was subsidies that John Kerry (D-MA) said would put taxpayers on the hook for at least a dozen new reactors, and possibly far more.

The details are temporarily moot, but the portent is not.

Chernobyl exploded in a remote backwater of an impoverished region. But by official accounts from Ukraine and Belarus, it did $500 billion in damage just there. Nowhere in the U.S. would the property damage be remotely that small. The near-million death toll would be a mere fraction of how many would die here.

Nothing in any known draft of this now-in-limbo climate bill demands private insurance against such a catastrophe. Nor does it have a solution for what to do with 60,000 tons of high-level radioactive waste, or thousands more yet to come.

Nor does it begin to answer the reality that every cent thrown down the reactor rat-hole could quickly save far more energy than such a reactor could produce — if it ever did come on line after the seven-to-ten years it would take to license and build such a boondoggle.

No sane attempt to save the global ecology could ever include more money for precisely the most dangerous, destructive, dirty, and deficit-ridden energy technology ever devised.

Let’s hope this bill’s yank away from Chernobyl Day will take it to the desperately needed safe haven of a Solartopian plan built around renewables, conservation and efficiency.

Neither the planetary ecology nor the U.S. economy can afford anything less.

Nothing else would deserve the label “Climate Bill.”

1 Response to Lethal Denial : Chernobyl and the Climate Bill