The news last week tells me it’s time to confess some doozies. 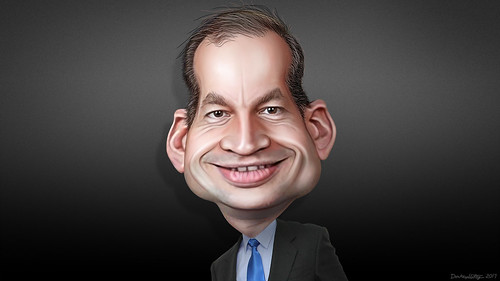 My method of practicing the pundit trade is to own my errors, and the news last week tells me it’s time to confess some doozies.

I wrote a piece for The Rag Blog on June 18, 2017, where I questioned the wisdom of impeaching Donald Trump based on running down his cabinet in the order of succession. In my evaluation of each Trumpian appointment, I mentioned matters that made the overall result predictable as night follows day. That overall result was a pack of billionaires with their hands in the public till, corruption on a level unknown since Warren Harding.

I did not hold it against Trump’s appointees that they would be charged with implementing policies I find contrary to the public interest. My criticisms had to do with competence and honesty. For purposes of testing honesty, obvious conflicts of interest coded as dishonesty. I did not include the military men because the context was moving up to be president, and I expected most of my readers would not want to elevate a general. The persons in the line of succession elected directly by the voters do not count against President Trump.

Applying those standards, and leaving aside one appointee who could not be POTUS because she was born outside the country, only three cabinet secretaries passed the smell test.

I rise now to confess error and apologize for claiming that Trump had allowed three non-military persons to slip into his cabinet who were honest and competent.

The first to fall was Dr. David Shulkin, Secretary of Veterans Affairs.

The first to fall was Dr. David Shulkin, Secretary of Veterans Affairs. Shulkin’s sins were small beer in the context of the Trump cabinet, and his record had been promising. He was the only Trump appointee confirmed 100-0 and if I had been voting it would have been 101-0.

His claim to fame in the VA happened shortly after President Barack Obama appointed him to an undersecretary position. Shulkin set out to have a VA “summit meeting” on how the VA could attack the problem of combat veteran suicides. His staff informed him that organizing it would take 10 months. Shulkin responded that in that time 6,000 veterans would die and demanded that it get done in a month, which it was.

The public reason Shulkin got the boot was that he took his wife on a European vacation at taxpayer expense and then lied about it. That’s my summary of some complicated charges and responses. Treasury Secretary Steven Mnuchin has been caught in similar activities and Mnuchin still serves. The amount Shulkin got caught stealing was trivial in the context of the stealing by most of the Trump cabinet, but he damn well should have known better.

The private reason for Shulkin’s firing was the reason he should have known better than to think he could conduct himself like the rest of the cabinet. He was conducting a very public policy war over privatizing VA health care, a war he could only fight because all the major veterans’ organizations were on his side. To get some veteran patina on the privatization side, Trump had to resort to a Koch Brothers funded Astroturf outfit, Concerned Veterans for America, that fooled nobody. It became easier to get rid of the guy leading the charge for most veterans.

One down and two to go.

Interior Secretary Ryan Zinke was bad for the country because he supported the destruction of public lands for private profit, but you could say that about anybody Trump was likely to appoint to Interior.

On Oct. 19, 2018, PBS News Hour aired a report on Zinke’s stealing, a matter that the Interior Inspector General was investigating.

On Oct. 30, 2018, the IG referred Zinke’s case to the Department of Justice for criminal prosecution.

That’s two of three, and the only one left I thought passed the competent and honest wickets was Secretary of Labor Alex Acosta.

Last week, a really odd plea bargain crafted by Acosta when he was a federal prosecutor in Miami blew up.

Epstein’s “business model” involved recruiting girls of high school or middle school age to give him massages at his Florida mansion for two or three hundred dollars. The girls would then be pressured into sex acts, which Epstein would document and use to coerce the victims to more extreme sex acts and to recruit more girls.

An FBI investigation had identified over 30 victims and it was still ongoing when Acosta entered into an agreement that pulled the plug on the FBI. There was already enough to put Epstein in the Club Fed for the rest of his life.

Acosta allowed Epstein to plead guilty to two counts of soliciting a minor.

Acosta allowed Epstein to plead guilty to two counts of soliciting a minor for prostitution in Florida state court. On those pleas, Epstein served 13 months of an 18 month sentence in a private section of the jail that he was allowed to leave for as long as 16 hours at a time on “work release.” This for a billionaire who does not work, but if he did all he would require is a laptop computer and a telephone. Most jail inmates can’t have a laptop computer and a dedicated phone line, but those amenities would amount to lesser concessions by the Sheriff than the fake work release.

Normally, state convictions do not cut off federal prosecutions because the states and the federal government (and Indian tribal courts) are “separate sovereigns,” meaning that each sovereign may bring charges for the same conduct.

The first oddity is that in this case, Acosta agreed to pull the plug on the FBI investigation in return for the state court pleas.

The second oddity is that Acosta emphasized the pulling of the plug by agreeing that nobody who assisted Epstein’s underage sex ring or who was gifted with a girl for a night would be prosecuted. It’s not unheard of for one of several co-defendants to take a fall for the rest, but in this case Acosta agreed to a free walk for an unknown number of un-named persons involved in sex with children.

When the FBI was called off they had just passed 30 victims.

When the FBI was called off they had just passed 30 victims. A subsequent investigation by the Miami Herald exceeded 60 victims and it’s common knowledge in Miami that those girls were having sex with very powerful and very wealthy people. Several Jane Does who were unhappy with how the man who victimized them skated past criminal liability have filed civil suits against Epstein.

Among their allegations are that, while underage, they were forced to have sex with one of Epstein’s lawyers, Alan Dershowitz, and UK’s Prince Andrew. Dershowitz and a spokesman for Buckingham Palace have vigorously denied the allegations and Dershowitz has stated his intention to come after the law licenses of the attorneys representing the Jane Does.

Last week, Congress opened an investigation into how so many child sexual abuse cases were made to disappear so quietly to benefit so many big shots. Acosta will have some ‘splainin’ to do and his disgrace ends my confession of error when I claimed that Trump had appointed a cabinet of incompetents and crooks with three exceptions.

The only Trump appointees still serving are the aforementioned Treasury Secretary Mnuchin, Secretary of Commerce Wilbur Ross (most recently in the news for suggesting that federal employees hurting from the government shutdown get payday loans), Secretary of Education Betsy DeVos, and Secretary of Energy Rick Perry.

I had judged Mnuchin and Ross dishonest, although Mnuchin only for conflicts of interest, where Ross already had a record of sleaze. I had judged DeVos and Perry incompetent. DeVos knew so little about education and was so hostile to public education that she almost did not get confirmed and Perry — who had wanted to do away with the Department of Energy when he ran for POTUS — was unaware that DOE is responsible for regulation of nuclear power facilities.

Leaving aside the errors I admit today, Trump still appointed the most corrupt and incompetent cabinet since, at least, Warren G. Harding’s administration.

The three appointees I claimed were clean have shown by their conduct that I had insufficient information and, had I been voting on their confirmations, I would have voted incorrectly.