Ted McLaughlin : Our Fear of the ‘S’ Word 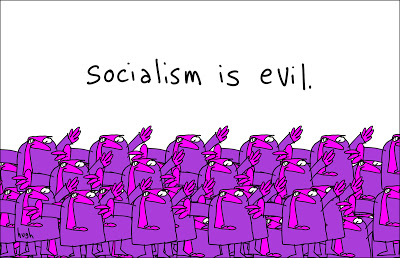 Graphic from gapingvoid.
Do the American people like socialism
as long as we don’t call it that?

There is little doubt that for most Americans, “socialist” would be about the worst thing they could be called. Americans seem convinced that having a socialist system of economics (and it is an economic system — not a type of government) would be against everything America stands for. They feel this way because the word has been demonized for decades in this country by right-wingers and corporate interests.

Most Americans equate socialism with communism (a different economic system) and dictatorship (a type of government). The truth is that socialism has little to do with either one. I don’t think most Americans even know what socialism is. To them it is just an evil lurking in the shadows waiting to steal our freedom, something akin to slavery or tyranny.

But there is an interesting survey that tends to show we, as Americans, may be more afraid of the word than the reality. There’s no doubt Americans are afraid of the word, but the survey by Michael I. Norton of the Harvard Business School and Dan Ariely of Duke University shows that a huge majority of Americans may actually think socialism produces a fairer and better result than our own biased-toward-the-rich capitalist system.

Their survey, which included a large group of 5,522 American citizens, showed a couple of very interesting things. The first is that most Americans don’t realize just how out-of-whack the distribution of wealth is in America.

Survey respondents believed that the richest 20% of Americans control about 59% of the country’s wealth. The truth is much worse. In 2005, the richest 20% actually controlled about 84% of the wealth in America (and that percentage has undoubtedly grown in the last five years).

They may be afraid of the word “socialism,” but they believe the results of socialism are better — as long as you don’t use the “S” word to describe it. In other words, years of propaganda and scare tactics have frightened them into accepting a system they know is fair only for the richest few Americans.

Americans are really socialists at heart and believe in a fairer system of wealth distribution. They have just been convinced by decades of propaganda to vote against the their best interests of those of their fellow citizens, and that’s just sad.

3 Responses to Ted McLaughlin : Our Fear of the ‘S’ Word