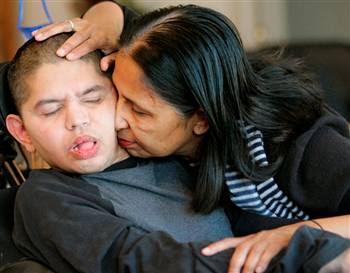 Farhat Chishty, right, spends time with her mentally retarded son Haseeb Chishty at Denton State School in Denton, Texas, Jan. 16, 2008. In 2002 Haseeb nearly died after a beating by a care worker and is now confined to a wheelchair and unable to feed himself or use the bathroom. Photo by Donna McWilliam / AP.

DENTON, Texas – For more than a century, thousands of mentally disabled Americans were isolated from society, sometimes for life, by being confined to huge public hospitals.

In at least one place, they still are.

Critics allege that Texas remains stuck in an era when the mentally disabled were hidden away in large, impersonal facilities far from relatives and communities.

“In Texas, it’s like a time warp,” said Jeff Garrison-Tate, an advocate who wants to close the 13 hospitals called “state schools” and move patients into group homes.

For the third time in three years, the criticism has attracted the attention of the Justice Department, which on Tuesday accused Texas of violating residents’ constitutional rights to proper care.

Investigators found that dozens of patients died in the last year from preventable conditions, and officials declared that the number of injuries was “disturbingly high.”

In addition, hundreds of documents reviewed by The Associated Press show that some patients have been neglected, beaten, sexually abused or even killed by caretakers. Inspection reports also describe filthy rooms and unsanitary kitchens.

Many of the nation’s mental hospitals were first built in the 1800s, when they were often called insane asylums. But by the 1960s, most experts concluded that patients fared better in smaller, community-based settings.

The American Association on Intellectual and Developmental Disabilities says large care facilities — usually those with at least 16 residents — “enforce an unnatural, isolated, and regimented lifestyle that is not appropriate or necessary.”

Because of those concerns, eight states have abolished large institutions for the mentally disabled. Another 13 states closed most of their largest facilities, leaving just one open in each state.

But Texas has remained “the institution capital of America,” said Charlie Lakin, director of the Research and Training Center on Community Living at the University of Minnesota.

Other states with large populations such as New York and California — which have rates of 11.2 and 7.5 people, respectively — rely far less on large institutions.

Federal law requires the mentally disabled to be treated in “the most integrated setting” possible — a factor that led to the Justice Department rebuke of Texas.

Laura Albrecht, a spokeswoman for the Texas Department of Aging and Disability Services, said the agency is expanding community-based services. Texas officials say keeping the facilities open is a matter of preserving as many treatment options as possible.

But critics allege that “warehousing” patients in large institutions invites abuse. Patients are isolated from their families and communities, making regular contact with loved ones more difficult. And caretakers often get overwhelmed by the large numbers of patients, Garrison-Tate said.

In Texas, officials verified 465 incidents of abuse or neglect against mentally disabled people in state care in fiscal year 2007. Over a three-month period this summer, the state opened at least 500 new cases with similar allegations, according to federal investigators.

An AP investigation earlier this year revealed that more than 800 state employees have been fired or suspended since the summer of 2003 because they abused, neglected or exploited mentally disabled residents.

And in the one-year period ending in September, as many as 53 deaths in the facilities were due to potentially avoidable conditions such as pneumonia, bowel obstructions or sepsis, the Justice Department said. Some families tell horror stories of their loved ones in the state facilities. For instance, Michelle Dooley said her son spent three months in the Austin State School, which she described as a place of “dingy yellow floors and patients running around without any clothes on.”

During his time there, he refused to leave his bed and often languished in his own excrement, she said.

Dooley eventually moved her son into a group home in Denton where treatment costs average about $50,000 per year — roughly half as much as the costs at state schools, Garrison-Tate said. Medicaid often picks up most of those costs.

“It was just horrible,” Dooley said. “If he goes back to a state facility, he will shut down and die.”

More seriously, two employees were fired after throwing a resident into a pool while he was wearing a restraint jacket. The employees had made a bet with the resident that he would be unable to dunk another resident under water. When he lost the bet, the employees restrained him and threw him in the water, according to the reports.

Other families say they are happy with the state care.

Neil Davidson said his daughter Susan, who has cerebral palsy and is mentally retarded, has flourished during her 10 years at the Lubbock State School.

“I’m very impressed with the level of care she has received,” Davidson said. “As far as I am concerned, it’s Mr. Rogers’ neighborhood. Everybody is looking out for everybody else.”

A visit to the Denton State School, the largest in Texas, reveals a sprawling campus spread across well-kept lawns. Superintendent Randy Spence described the place as a “happy, homelike atmosphere.”

“The vast majority of our employees love the people they work with,” said Cecilia Fedorov, another spokeswoman for the Department of Aging and Disability Services. “They think of them as extended family.”

But Denton is also the site of Texas’ most notorious case of state school abuse.

In 2002, a care worker repeatedly kicked and punched a resident in the stomach and groin. Haseeb Chishty nearly died after that beating. He is now confined to a wheelchair and unable to feed himself or use the bathroom.

“It got to the point where it was fun beating him, torturing him,” said former care worker Kevin Miller, who is now serving 15 years for aggravated assault.

In a statement videotaped by Chishty’s lawyer, Miller said he and many of his fellow care workers used methamphetamines, cocaine and Oxycontin on the job.

Chishty’s mother filed a lawsuit against the facility, but it went nowhere. In Texas, government entities are all but immune from lawsuits.

Some critics want to close the state schools. But because the Texas Legislature created each one, only lawmakers can close them.

Many of the institutions are large employers in small towns, and they often pay more than other jobs in rural areas. Lawmakers fear taking action that would lead to layoffs, Garrison-Tate said.

“Even if we said we wanted to close all state schools, the community resources aren’t there at this time,” said state Rep. Larry Phillips, chairman of a legislative committee studying the facilities.

Kelly Reddell, the lawyer whose client’s son was beaten nearly to death, said the state is not doing right by its mentally disabled.

“The very nature of the institutional setting, I think, creates the environment for the abuse to take place,” she said. “How in the world can you think this system is the best and it makes sense?”

Thanks to Wayne Johnson / The Rag Blog