Texas Plans to Harness All the Hot Air 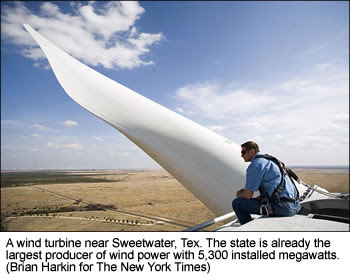 AUSTIN – Texas regulators have approved a $4.93 billion wind-power transmission project, providing a major lift to the development of wind energy in the state.

The planned web of transmission lines will carry electricity from remote western parts of the state to major population centers like Dallas, Houston, Austin and San Antonio. The lines can handle 18,500 megawatts of power, enough for 3.7 million homes on a hot day when air-conditioners are running.

The project will ease a bottleneck that has become a major obstacle to development of the wind-rich Texas Panhandle and other areas suitable for wind generation.

Texas is already the largest producer of wind power, with 5,300 installed megawatts – more than double the installed capacity of California, the next closest state. And Texas is fast expanding its capacity.

Transmission companies will pay the upfront costs of the project. They will recoup the money from power users, at a rate of about $4 a month for residential customers.

Details of the plan will be completed by Aug. 15, according to Damon Withrow, director of government relations at the Public Utility Commission, which voted 2 to 1 to go ahead with the transmission plan. The lines will not be fully constructed until 2013.

“The lack of transmission has been a fundamental issue in Texas, and it’s becoming more and more of an issue elsewhere,” said Vanessa Kellogg, the Southwest regional development director for Horizon Wind Energy, which operates the Lone Star Wind Farm in West Texas and has more wind generation under development. “This is a great step in the right direction.”

Ms. Kellogg said that the project would be a boon for Texas power customers, whose electricity costs have risen in conjunction with soaring natural gas prices across the state. “There’s nothing volatile about the wind in terms of the price, because it’s free,” she said.

“We think it’s going to lower costs, lower pollution and create jobs. We think that for every $3 invested, we’ll probably see about an $8 reduction in electric costs,” said Tom Smith, the state director.

The transmission problem is so acute in Texas that turbines are sometimes shut off even when the wind is blowing.

“When the amount of generation exceeds the export capacity, you have to start turning off wind generators” to keep things in balance, said Hunter Armistead, head of the renewable energy division in North America at Babcock & Brown, a large wind developer and transmission provider. “We’ve reached that point in West Texas.”

Jay Rosser, a spokesman for Boone Pickens, the legendary Texas oilman who plans to build what has been called the world’s largest wind farm in the Texas Panhandle, welcomed the announcement.

But because about a quarter of the Pickens project capacity will come online by 2011, two years before the Texas lines are fully ready, “we will move forward with plans to build our own transmission,” he said.

Lack of transmission is a severe problem in a number of states that, like Texas, want to develop their wind resources. Wind now accounts for 1 percent of the nation’s electricity generation but could rise to 20 percent by 2030, according to a recent Department of Energy report, if transmission lines are built and other challenges met.

But other states may find the Texas model difficult to emulate. The state is unique in having its own electricity grid. All other states fall under the jurisdiction of the Federal Energy Regulatory Commission, adding an extra layer of bureaucracy to any transmission proposals.

The exact route of the transmission lines has yet to be determined because the state has not yet acquired right-of-way, according to Mr. Withrow of the utility commission.

The project will almost certainly face concerns from landowners reluctant to have wires cutting across their property. “I would anticipate that some of these companies will have to use eminent domain,” he said, speaking of the companies that will be building the transmission lines.

This entry was posted in RagBlog and tagged Alternative Energy, Economy. Bookmark the permalink.