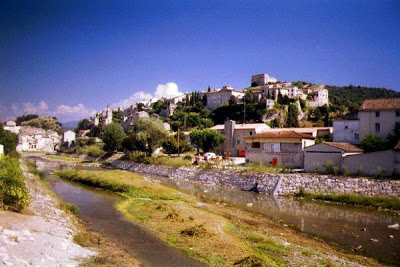 Vaison-la-Romaine in Southern France.
A tale of healing in southern France
By Mary O’Grady / The Rag Blog / July 21, 2008

In Vaison-la-Romaine in Southern France where my husband Mack and I were staying with our old friend Massimo Mauro, there is one supermarket with a perpetually congested parking lot, and parking is an international competition, what with all the tourists from all over Europe. Massimo and Mack and I went there almost every day; the fresh bread and fruit and vegetables and meat were excellent.

(Have you heard about the locavore movement, the latest big thing among conscious eaters in the US? People are pledging to eat as much as possible foods produced within some small radius of where they live, say 80 or 100 miles. The locavore movement is old news in France. I was impressed that even at the supermarket so much of the fruit, delectable apricots and cherries for example, and the meat came from the surrounding region.)

Well, on Wednesday the 23rd at mid-morning, Massimo was heading his small BMW sedan into a parking space when a woman in the next slot started backing out without looking. Massimo reacted instantly, backing his left front tire straight onto the front third of my right foot. (That car was way heavier than it looked, by the way.)

After I screamed at the top of my lungs, my further response was more articulate but loud and profane. Massimo got his tire off my foot, which now sported an obvious tire track and a torn toenail which began to bleed profusely.

My screams attracted a small knot of French matrons who pointed at my foot and made idiotic suggestions, e.g.,“Vous devez aller au pharmacien. (“You should go to a pharmacist.”) French pharmacists are versatile and extremely well-trained but I doubted one of them would be up to this particular task. I was grateful when Mack and Massimo, now white as a sheet, agreed with me that we should find an emergency room.

Mack put a plasticized shopping bag on the back seat to protect the upholstery and took over driving. The woman who had been backing out of the parking space said she would lead us to the local hospital, a modern structure which was somehow tucked away among the narrow streets and ivy-covered stone houses of the old part of the town.

At the Urgences door of the hospital, Massimo clambered out of the car and went to tell somebody what had happened. Mack and I waited. I was all for stumping on in, myself, but Massimo wanted me to wait for a wheelchair that I did not strictly need.

After several minutes, a sprightly little nurse of about sixty emerged with a wheelchair. She wheeled me into a two-bed emergency room bay and got me up on a gurney. The other bed was occupied by a very elderly, very ill man in obvious respiratory distress. She drew a curtain between his bed and my gurney.

The nurse occupied herself with cleaning the rubber off my foot. The little toenail was hanging by a skin tag but the bleeding had stopped. Massimo, meanwhile, had achieved a rare degree of emotional shock, poor man. I was extremely relieved when the nurse came up with a chair for him.

The paperwork came a bit later, and proved minimal. The nurse wanted a peek at my passport; she was very amused at the Xeroxed copy of Mack’s and my rather grand-looking marriage license which I always carry in it because my passport lists “O’Grady” as my surname. She asked me to write my name and address and telephone number on a yellow form; I could have put down “555 Minnie Mouse Street, Anytown, Texas, USA,” and nobody would have been the wiser. There was no breath expended on payment.

A trim, blonde female doctor in early middle age then came in and examined my foot. She and the nurse apologized that there would be about a thirty-minute wait for x-rays, which proved to be true. Massimo and Mack were told that they would absolutely not be allowed to accompany me.

Mack and Massimo and I passed the time in idle chit-chat and much reassurance for Massimo– it was really just a freak accident, but Massimo was simply aghast. Meanwhile, the moribund man in the next bay rasped away as his heart monitor beeped steadily. At length, the little nurse put me back in a wheelchair and wheeled me to an elevator, telling me meanwhile that the following month she was going on holiday to California. “Ah, oui?” I replied.

“Oui, a Phoenix,” she said. I did not feel quite up to a geography lesson, but I wondered about her travel agent.

In the radiology department upstairs, I was swiftly taken in hand by a pretty young female technician who took two shots of my foot. After several minutes, I was wheeled out of the x-ray room to a waiting room with a beautiful view of an ancient honey-colored stone church spire topped with an interesting wrought-iron belfry.

The little nurse from the emergency department emerged from the elevator after several minutes and collected my x-rays in their big Manila envelope, and me. Downstairs, the doctor said that no bones were broken, to expressions of happy relief. The nurse bandaged my toe and instructed me not to get the bandage wet, and the doctor said I should come back in two days to have the bandage changed. She also gave me a prescription for a mild painkiller.

At the pharmacy across from the supermarket, 32 painkiller tablets came to about $8 US. After filling the prescription, Mack parked up at the supermarket, thankfully without incident, and we went in and bought things, including a bottle of alleged tequila, some Grand Marnier, and the entire stock of Mexican limes, so that Mack could make some margaritas to soothe Massimo’s shattered nerves.

Back at the house, I repaired to our upstairs bedroom and propped up my foot and tuned in to the BBC World Service on my teensy radio. Later on, we all had a light supper with margaritas for Mack and Massimo and just a few sips of an excellent Sancerre for me, considering the painkillers I had taken. Mack and Massimo then had a very “guy” evening, watching the German national soccer team playing Spain, if memory serves, and drinking more margaritas. I could hear their hoots and groans from the bed upstairs.

On the Friday morning my toe was re-bandaged by another nurse, a slim young woman who told me that henceforth I should feel free to bathe as long as I put a dry bandage on the toe afterward. (Oh, joy! I was very tired of sponging myself and I feared that I was beginning to smell stereotypically French.) She also said that I should visit the accounts department and pay.

Massimo insisted on dealing with the accounts department. The total hospital charge came to about $80 US. How much do you think this all would have cost a hapless, uninsured foreigner in an American small-town emergency room?

This entry was posted in Rag Bloggers and tagged France, Health Care, Travel. Bookmark the permalink.